Week three of ‘October Frights’ brings us to the world of Ernest P. Worrell and an angry troll bent on revenge during Halloween. Ernest Scared Stupid brings us the silly humor of Jim Varney and his outlandish character of Ernest. Though this Halloween tale is not scary, the humor may have you howling like a werewolf for a variety of reasons. 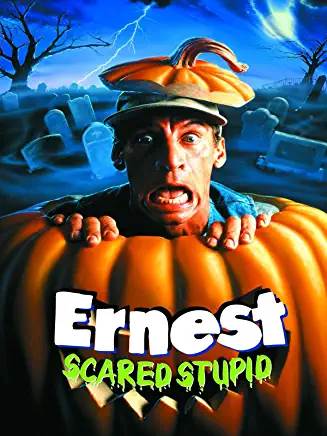 Ernest (Jim Varney) is a sanitation worker in Briarville, Missouri. Though he tries hard, Ernest continues to cause problems for the town and himself. While trying to help local kids Kenny and Elizabeth (Austin Nagler and Shay Astar), build a treehouse, he unleashes Trantor the troll (Jonas Moscartolo) on the eve of Halloween.

Trantor is looking for revenge on Briarville for being imprisoned by the founders of the town. The troll plans to make the people of Briarville atone for their sins by kidnapping the Briarville kids and using their souls to build his own army of trolls. There is only one person who can defeat Trantor and save the town, Ernest P. Worrell.

Helped by Old Lady Hackmore (Eartha Kitt), Ernest rallies the citizens to save Briarville and defeat Trantor before it is too late.

Ernest Scared Stupid is not a great film. It’s barely watchable, and without Jim Varney, audiences wouldn’t be able to get through the picture. Watching this film now makes me wonder how on earth it got a big screen release. The star of the show is Varney, and in previous movies in the Ernest world, he had a capable supporting cast, and the scripts would be palatable.

This film was the lowest grossing film of the series, and there’s a reason. Ernest films are meant to be silly with oddball humor. Varney is usually aided by straightforward stories that usually have a heart and a happy ending. Ernest Scared Stupid is just tiring and boring. The jokes are not funny, the supporting characters are forgettable, and the story is nonsense. To have a troll stealing children and using their life force to build an army is too extreme for the supposed slapstick formula that Varney and company have shown in past films.

Poor Eartha Kitt spent her last few years acting in substandard roles like Old Lady Hackmore. This talented actor deserved more and is given little to do in the film.

Ernest Scared Stupid gets a 0 Golden Popcorn Bucket rating. The title of the film alone should give you enough of a hint about the content of the film. Jim Varney as usual, throws himself into the role of Ernest with gusto, but the story, supporting cast, and the troll just aren’t interesting enough to sustain the attention of the audience.

I am huge fan of the Ernest films. I loved the first three in this series, and still have fond memories of seeing Ernest Goes to Jail in the theatres when it was released in 1990. Ernest Scared Stupid just doesn’t live up to the humor and joy that the previous movies in the series bring to me.

In watching this film for ‘Touchstone and Beyond’ I sat down with my nine-year-old daughter to introduce her to the world of Ernest. Having never seen this movie before I was expecting the same silly humor as previous movies. How wrong I was. While I was bored by the movie, I wondered what my daughter thought of her first Ernest film. To paraphrase her response, the movie lives up to its title.

Next week we go back to the M. Night Shyamalan world with his creepy thriller in the cornfields, Signs.