Week four of ‘October Frights’ brings us back to the cinematic world of M. Night Shyamalan and his 2002 psychological thriller Signs. By the time the credits role, you will think twice about walking into a cornfield late at night. 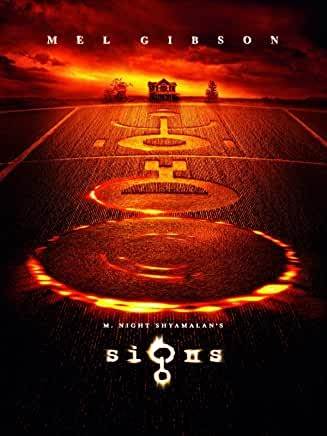 Graham Hess (Mel Gibson) is grieving the loss of his wife. Having been killed six months ago after being hit by a car, Hess is forced to grieve in silence as he tries to keep his family together. A former minister, the accident has caused Graham to lose his faith in god and abandon the church.

With his brother Merrill (Joaquin Phoenix) living at home, Graham is struggling to make it through day to day, when he sees his corn corps have been damaged. Large elaborate crop circles have flattened parts of the Hess fields, and Graham thinks it’s a prank from some local neighbors. As the days go by and strange incidents continue to happen, Graham and Merrill believe there is more to the crop circles.

The television news reports mention mysterious lights in the sky all over the world. The Hess family is left wondering if an alien invasion is taking place. Doubtful about the aliens, Graham is terrified when he spots an unknown figure in his cornfield. His son Morgan (Rory Culkin) is convinced aliens have landed and proceeds to educate the family about what to do. Graham boards up the windows to the family home, sheltering in place for the time being. With Merrill, Morgan, and his daughter Bo (Abigail Breslin), the Hess family hides in their basement when alien beings can be heard on their front porch.

Graham and his family must find a way to survive the night and hopefully see dawn.

Mel Gibson plays a grieving father well. Set aside all the real-world issues with Mel and what he has done that is reprehensible, his portrayal of an emotionally broken former minister who is trying to hold his life together so soon after the death of his wife is extremely well done. As an audience, you ache for Graham because he is a man of god who has always put his faith in the spiritual calling of his work only to have that faith shattered. The senseless death of his wife has angered him causing his rage to bubble to the surface. Gibson does well to play a normal man who has been hurt by this tragic event.

Joaquin Phoenix is funny and emotionally supportive in a role that could easily be overplayed by many actors. While Phoenix is only left with small moments to develop his backstory for Merrill, we see an emotionally complicated man, much like his brother Graham. Graham is methodical and well thought out in his actions. Merrill is impulsive. Gibson and Phoenix use their scenes together to forge a family bond that shows two brothers who care deeply for each other. Phoenix uses quick moments to show his affection and love for his brother. When Morgan talks about how he wished Merrill was his dad, Phoenix vehemently and lovingly tells his nephew to never talk like that again. Phoenix’s facial reaction to the television video of the aliens that show up outside of a birthday party are pure gold.

The film has many scary moments, and for first time viewers they will certainly be frightened when Graham encounters the alien in the cornfield. While the thrills and chills are standard jump scare sequences, what stands out as the most frightening is how fast a person’s life can change. Graham Hess was a man of god who had a great marriage and two young kids. Six months later his wife has died in a senseless accident and now Graham is shattered. The horror of the film is not the alien invasion. Signs shows the difficulty of the real world. How we choose to react and carry on when faced with challenges is the lesson of the movie.

Shyamalan has a great story that is amplified by the long shots that he takes for scenes. Rather than quick cutting, drawn out scenes showcase the actors and offer them time to really develop their characters. The scene in the cornfield where the audience assumes the role of Graham and the view switches from seeing Gibson’s character seeing things, to the audience seeing the alien first is what makes the film spooky. The audience is not passive, but rather a part of the film.

The downfall of the aliens is a contentious issue that has bothered me since seeing the film in the theatres eighteen years ago. Without spoiling it for those who have not seen the movie, the fact that the aliens came to Earth, a planet that has so much of their weakness makes me think the aliens are stupid or it’s a convenient wrap up to the story that Shyamalan was using.

Signs gets a 3 Golden Popcorn Bucket rating. While the movie has plenty of thrills and chills to give you the frights, the power of Signs comes from the skill of the actors and how they bring to life their characters. The resolution to the conflict is a bit of a letdown, but after eighteen years, Signs still entertains the audience.

Next week we conclude ‘October Frights’ with another M. Night Shyamalan thriller, The Village.