Touchstone and Beyond: A History of Disney’s “Swing Vote”

Election 2020 is over and voters across the country have cast their ballot for a variety of candidates including the president. Politicians and pundits regularly talk about how every vote matters and in Touchstone Pictures 2008 film Swing Vote, the fate of the US Presidential election will come down to one voter, played by Kevin Costner. 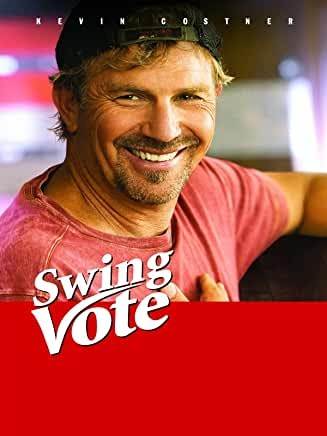 If you thought the last few weeks was a rollercoaster, sit back and laugh at what could have been even worse than waiting for thousands of votes to be reported by a variety of states. Cringe in horror that one person has all the power to choose the next leader of the free world.

It’s election day and Bud Johnson (Kevin Costner) couldn’t care less. While Bud doesn’t know who’s running, or whether he should vote, the election is very important to his daughter Molly (Madeline Carroll). After failing to show up at the polling station, Molly sneaks in and tries to vote in her dad’s place. A computer error forces Molly to retreat with the poll workers not wise to her deception.

Bud and Molly are woken in the middle of the night by the state attorney general and secretary of state. They inform Bud that due to the malfunction at the polling place, according to state law, Bud can recast his ballot in the next ten days. Alone, Bud confronts Molly and learns what she did. Going along with the lie, Bud and Molly’s world is quickly turned upside down.

The presidency, whether it is the reelection of President Boone (Kelsey Grammer) or the election of his Democratic challenger Donald Greenleaf (Dennis Hopper) will be decided by Bud’s one vote. Thanks to local reporter Kate (Paula Patton) Bud’s identity is national news and the world media and the two campaigns arrive in Texico, New Mexico to cover the story and persuade Bud for his vote.

What seems like an easy task for the two contenders causes both Boone and Greenleaf to reevaluate their own priorities. Each campaign is looking for indications of how they could gain Bud’s vote, which leads the candidates to change their long-held positions in order to gain Bud’s favor.

As the two politicians battle for the win, Bud is coming to grips with his own life. The unemployed loafer is compelled to take an interest in the unique position he occupies in the country. Thanks to Molly and Kate, Bud starts to read the mail he has received from Americans who want him to press the candidates on issues that affect so many citizens.

After sitting through a one on one debate between Boone and Greenleaf, Bud walks into the polling place to cast his ballot like every other civic minded person.

No actor, except Jeff Bridges, can play a lovable loser like Kevin Costner. Well known for serious roles like Field of Dreams and The Untouchables, Costner looks and acts like he is having so much fun playing Bud. Costner can play dumb and sophisticated expertly on screen, and his presence lately in supporting roles adds a level of gravitas and class to films that no one else can bring. (Costner is his best as Jonathan Kent in Zack Snyder’s Man of Steel. While the film has many problems, Costner’s brief role as Superman’s adoptive father is a superb performance and a highlight for me.) In Swing Vote, Bud is the joker that never takes anything seriously. Costner plays this simple man well, and it’s his talent that allows his character to reform and finish the film so strong.

Kelsey Grammer and Dennis Hopper have the unenviable task of playing the competing politicians in this film. While the movie could have made each of them stereotypical politicians who craved power, it was nice to see the humanity of each man displayed. Yes, the film does show the lower level of what a politician will do to gain the ultimate prize of the presidency, but Swing Vote allows the good men that each of them are to shine through. Hopper and Grammer’s characters could have been portrayed in a multitude of ways but choosing to show them as good men who just want to do their best for others is often forgotten about politicians. Most elected officials have a desire to do good. Sometimes this notion of service gets lost in the business of politics, and it was nice to see how Grammer and Hopper’s characters find their true selves again.

My only complaint is the debate, where Bud has finally pulled it together and has learned something about the needs and issues that everyone is facing in the country. With resounding uplifting music that signals this is a cinematic moment, Bud reads a prepared text that is schmaltzy, and expected for the film.

Swing Vote gets a 3 Golden Popcorn Bucket rating. The movie walks a fine line between satire and being genuine, but it succeeds at its core mission. Voting is important, and the audience will get caught up in ideas behind Swing Vote. Voting matters and everyone needs to do their civic duty by being engaged in the process. While it may seem like an impossible situation that could never happen in real life, Swing Vote echos so many real elections that have been decided by hundreds of votes.

It may have been a financial failure that was given a lonely August release, Swing Vote is worth watching.

In celebration of Veterans Day, next week ‘Touchstone and Beyond’ looks back at Robin Williams 1987 hit, Good Morning Vietnam.