If you have enjoyed watching the trials and tribulations of the Mercury astronauts on The Right Stuff then you must watch the follow up documentary, The Real Right Stuff premiering on Disney+ November 20. The television series is based on the seminal book by the late author Tom Wolfe and, with The Real Right Stuff Wolfe, narrates behind the scenes life at NASA as the United States geared up for the space race with the Russians.

The Real Right Stuff is not meant to be a thorough history lesson about NASA or the Mercury program. The movie lacks any mention of the women core of astronauts, nor does the film confront racial issues that were plaguing the country and the government at the time. This movie is an excellent companion piece to the series that focuses on the real seven astronauts, NASA, and the government as they cobbled together a space program that wouldn’t end in disaster.

Tom Wolfe’s narration to the film is the perfect addition to the film. While dramatizations of real people and events are acted out by a talented cast in the series, The Real Right Stuff is a collaboration of newsreels, interviews, behind the scenes footage, and audio of the men and women who were involved in the Mercury space program.

Wolfe sets the scene for the viewers by describing the international situation of when the Russians launched the first satellite, Sputnik, and how the United States was worried that the Russians could now launch intercontinental missiles from space. Charging into a space program, the US had multiple setbacks, from rockets blowing up on the launch pad, to the struggle about how to find their astronauts.

The Real Right Stuff adds depth and personal moments about the space race by letting the astronauts tell their own stories. We meet the seven men who will journey into space: Alan Shepard, Gus Grissom, John Glenn, Wally Schirra, Scott Carpenter, Deke Slayton, and Gordon Cooper. Through their family photos, home movies, NASA audio, and other archived material, we get to see the life of these seven men and their families.

From training for a task no one else had done, to navigating the thirst for knowledge from the press, the audience will see how the astronauts dealt with the pressure. Something you wouldn’t expect to see is the faces made by the astronauts as they are impacted by G forces on the spinning centrifuge during training. Ever wonder what an astronaut’s face looks like as they are about to pass out from G force pressure? The Real Right Stuff will show you the look men like Shepard and Glenn had before passing into unconsciousness. 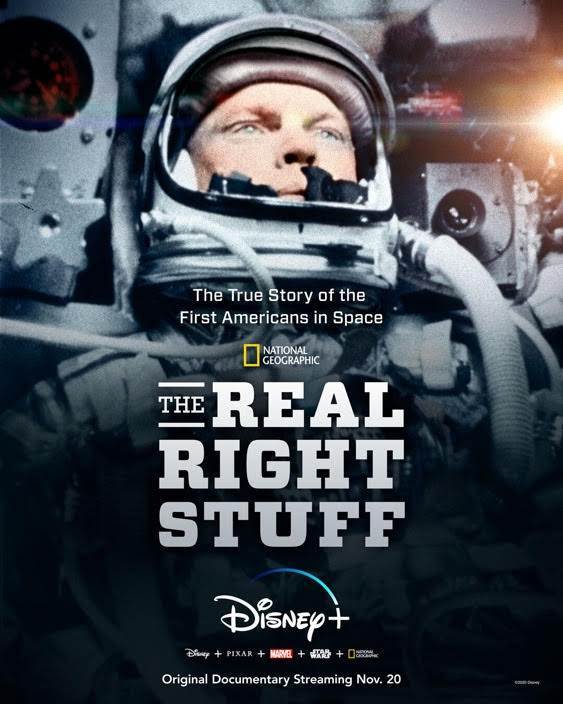 While The Real Right Stuff excludes gender and racial issues that made the space program a white male only domain, it does paint a picture of the reality of the mythical men that flew into space. Life magazine crafted the all-American image of the Mercury Seven, but the shining image on the page was far from reality.

When Alan Shepard is launched into space in 1961, this is a new dawn of exploration for America. He is quickly followed by Grissom, which almost ends as a disaster for the program. During the recovery process, Grissom’s capsule is lost, and the media is left wondering what happened. While talk of Grissom’s responsibility for the mishap is mentioned, we learn that it was President Kennedy who decides to paint the mission a success. He couldn’t afford a failure.

Viewers will also get a close look behind the scenes at NASA as John Glenn orbits the earth in 1962. As Glenn orbits three times, cameras switch from mission control to Glenn’s capsule, and we watch as NASA debates telling Glenn about their fears that his heat shield has been damaged. This archived footage clearly shows the stress and worry of the men in mission control who are wondering if Glenn will survive this flight. He does and the missions continue.

From Glenn the missions continue with Scott Carpenter, Wally Schirra, and Gordon Cooper. Deke Slayton is grounded due to a heart condition. While we learn little about Schirra and Cooper’s missions, The Real Right Stuff does offer a tidbit about Scott Carpenter and his wife Rene. Viewers are privy to an audio tape between Wolfe and Rene Carpenter as she discusses what it was like to sneak down to Florida to watch Scott’s launch. This contravenes previous wives launch day routines of watching at home and then giving a press conference on the lawn.

The Real Right Stuff gets 4 Mercury Capsules out of 4 for offering a new look at a well-known story while building up the tension and pressure of this real-world battle for space supremacy.

Check out The Real Right Stuff when it premieres on Disney+ Friday November 20.