Producer Peilin Chou was in the audience when Glen Keane was giving a presentation about his famous Disney characters like Ariel, Aladdin, Belle and Tarzan. Shanghai-based Pearl Studios was looking for a director to helm an adaptation of a mythological legend that’s more famous around the world than Santa Claus. Not knowing much about China, Glen was eager to dive right in and take a research trip.

“I was being invited into China to tell this Chinese story back to the world,” Glen Keane explained about telling an authentically Chinese story in a way that has mass appeal. “It was never an American viewpoint of this story, it was always from a Chinese point of view so it was very important for me to go there.”

Before leaving Disney, Glen Keane shared his memories of a meeting with the President of Walt Disney Animation Studios and Pixar Animation Studios, Ed Catmull. He was feeling confined by studio walls with many of his friends working elsewhere and he remembers saying that what he was looking for was a place where he could creatively live without walls. On Over the Moon, he found that place. Many of his former Disney friends and colleagues stopped by Glen Keane Productions to see the work in progress and some even ended up on the film with him.

“I drew more on this movie than I did on The Little Mermaid,” Glen shared about how much hand-drawn work has to be done, even on a computer animated film. In addition to drawing over animator’s work to visually show them the changes he wanted made for each shot, Glen Keane also made the decision to have the traditional story of Chang'e be hand drawn on a silk scarf. He did some of the animation himself, paying homage to a story that is dear to the hearts of Chinese audiences. One of many challenges on the film was getting the 2D animation to map onto the right places of the moving CG fabric. 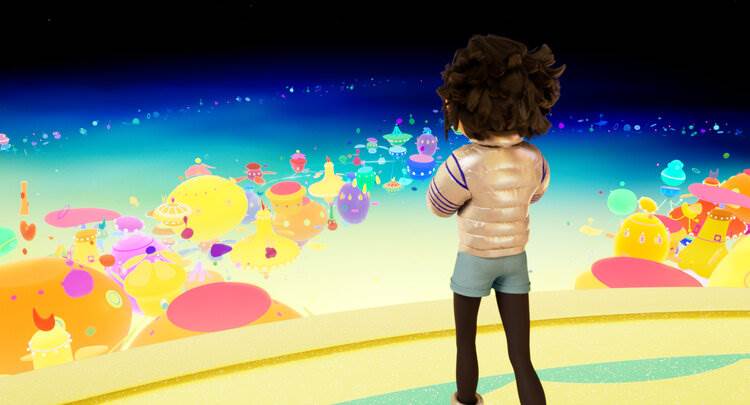 Writer Audrey Wells knew that she was dying while working on the film and wrote it as a way for her own daughter to come to terms with her death and move on with her life. Over the Moon wasn’t intended to be a musical, but Glen Keane kept being reminded of his time spent with Howard Ashman on some of his Disney work. As he was working on the film, he kept feeling like many of the deeper moments of the story could be better expressed through song. Audrey Wells didn’t live to see the final film, but she was able to rework much of the script to accommodate the songs that were written for it.

Glen Keane also shared the story of how Cathy Ang was cast as the voice of the lead character Fei Fei. Producer Gennie Rim secretly arranged a meeting between the two knowing that Glen would probably agree that she’s a perfect fit. They brought Cathy Ang in for an audition, during which she also recorded a temporary track of the song “Rocket to the Moon.” She obviously got the role, but her temp track was so good that when they tried to re-record it, they couldn’t get it to sound better. The version you hear in the film is Cathy Ang’s original temp track recording.

There were around six weeks left of production in March when Netflix shut down in-studio work. Like other animated projects, work on Over the Moon was able to continue remotely and Glen Keane relocated to his Lake Arrowhead vacation home where he got to enjoy the full spring season in the wilderness while completing the film. The score was originally going to be recorded at Abbey Road in London, but ended up being moved to Austria where the Vienna Philharmonic was able to safely record the score with plexiglass barriers between musicians. The sound was mixed at Skywalker Sound.

If you would like to learn more about the making of Over the Moon, Glen Keane recommends the book Over the Moon: Illuminating the Journey by film historian Leonard Maltin. Over the Moon is now streaming on Netflix along with a new animated series from Glen Keane Productions called Trash Truck, directed by his son Henry Keane and featuring Glen Keane as the voice of the titular truck.