As the time continues to fly by and reality just keeps getting stranger and stranger, Wanda and Vision are back for another episode of WandaVision on Disney+. The third episode, sees the new couple trying to deal with Wanda’s mysterious pregnancy and her increasing difficulty to handle the world around her. 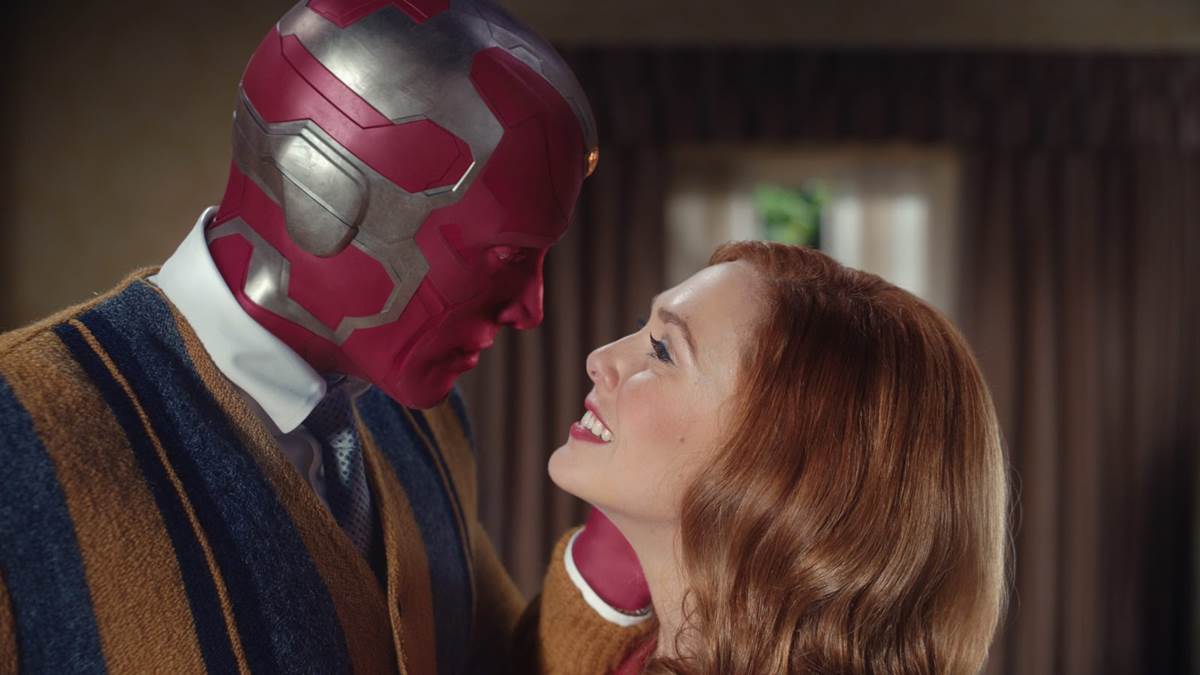 The episode opens with another brand new theme song, this time themed to the 70s. The episode obviously follows that theme as the show continues to jump ahead a decade with each new episode.

We see the couple at home, getting a visit from their doctor. A panicked Vision asks questions about the pregnancy, which confuses the doctor a bit. Wanda continuously covers for him as the doctor points out that she is about 4 months pregnant, despite the fact that it’s really only been about 12 hours.

As Vision walks the doctor out, he asks him to keep Wanda’s pregnancy a secret. The doctor agrees and takes his leave, while Vision greets his neighbor Herb. Vision looks back at his neighbor perplexed as Herb is using a hedge trimmer to cut into the cinder black wall lining their driveway. As Vision points out his mistake, Herb thanks him but continues to cut into the wall with a smile on his face.

Vision heads back inside to inform Wanda of the strange happening but becomes distracted when he notices Wanda is even bigger. The next scene sees Wanda preparing the baby’s nursery with Vision by her side. She begins to feel kicking, which causes her to inadvertently use her powers to bring some paper butterflies to life. She even goes as far to so explain that she didn’t do this on purpose.

As the two continue their conversation, Vision proposes the name Billy for a boy. Wanda counters with Tommy and the two playfully and briefly argue over what to name their child. Marvel Comics fans are likely aware that Billy and Tommy are actually the names Wanda’s children, who go on to become the heroes Wiccan and Speed, respectively. Wanda then uses her powers to paint a stork on the wall while Vision does the math to figure out that their baby should be due in just three days.

The two continue to prepare as Vision puts a diaper on a doll while Wanda times him. Their preparations are interrupted when Wanda experiences false labor. The experience causes her to lose control of her powers again as all of the appliances start to go crazy. Eventually, they lose power altogether and Vision learns that the same has happened on the whole block.

Wanda points out that if this is what happens during false labor, she’s afraid to know what will happen during the real thing. She shares her worry of her neighbors discovering their secret and Vision begins to point out that something is very wrong. Just when things are hitting a dramatic peak, the episode cuts back a few second and Vision plays out a different scene, simply comforting his wife.

As they begin to relax, Wanda is once again overcome with labor pains, only this time it’s the real thing. Breathing exercices calm her – and more accurately, Vision –  for a second before water begins to rain from their ceiling and Wanda tells her husband her “water just broke.”

Once again, the episode is interrupted by an “ad,” this time for “Hydra Soak.” Interestingly, there is no ticking sound in this one, breaking the streak from the previous two episodes.

The episode returns to find Wanda and Vision hiding under the table from the indoor rain. After a few seconds, it stops and Wanda uses her powers to blow dry their home. She once again feels the labor pains and Vision runs off to find the doctor.

Wanda tries to push through another contraction when she hears a strange sound coming from the nursery. As she goes to investigate, she is startled by her doorbell. Trying to keep her pregnancy a secret, she grabs a big coat to throw on herself before answering the door.

She opens the door to find Geraldine who has come to borrow a bucket because all of the pipes in her ceiling burst, resembling the problem Wanda and Vision had. As she goes to grab a bucket, Wanda feels several more contractions, each one changing the jacket she’s wearing.

Geraldine begins to tell a story about work when Wanda notices a live stork walking around her living room. Wanda tries to keep her neighbor from noticing the giant bird walking around her home but she can’t seem to use her powers to get rid of it. Geraldine eventually heads into the nursery and the bird hides perfectly matched up with the painting on the wall. Geraldine notices the crib and discovers that Wanda is pregnant as she starts going into labor. Meanwhile, Vision gets to the doctor’s home, throws him on his back and speeds away.

Geraldine tries to get Wanda ready to give birth and notices things around their home going haywire once again. Geraldine delivers Wanda’s baby boy and hands him over to the happy new mother. Vision and the doctor come in a moment later, and Vision meets his son. With Geraldine in the doctor in the other room, vision transforms into his natural state and holds the baby, calling him Tommy. As the couple shares a smile, Wanda begins to go into labor again and Vision explains another baby is coming.

A jump to the next scene sees all four adults in the living room with Vision and the doctor holding two baby boys, Tommy and Billy. Vision walks the doctor out and mentions the vacation he was supposed to be leaving for. The doctor explains that he thinks he’ll cancel his trip because small towns can be “so hard to escape.” A puzzled Vision finds Agnes and Herb gossiping in the yard. Intrigued, he approaches them to find out what they’re discussing. Agnes asks if Geraldine is inside with Wanda.

Back inside, Wanda reveals to Geraldine that she was a twin. She appears overcome with emotion as she brings up Pietro before singing to her newborn babies. Geraldine is visibly confused and eventually asks if Pietro was killed by Ultron. The questions sets Wanda aback.

Outside, Herb and Agnes explain that Geraldine is new to town and has no family, husband or even a home. Vision clearly finds that strange. Back inside, Wanda asks Geraldine to repeat what she said. The neighbor offers to take a shift rocking the babies and Wanda instead asks her to leave as she notices a strange necklace she is wearing. The necklace has the same S.W.O.R.D. logo we saw at the end of the first episode.

Vision tries to get more information from his neighbors and Herb begins to explain why Geraldine came to their town. Wanda questions Geraldine about the symbol on her necklace and asks who she is. Agnes cuts off Herb, telling him to stop. As Wanda continues to ask Geraldine who she is, the neighbor becomes visibly flustered and can’t answer any questions. Agnes runs off with a smile and Herb says goodbye to his neighbor as well.

When Vision heads back inside, he finds Wanda standing alone over the babies. He asks where Geraldine is and an eerily stoic Wanda explains that she left. It becomes more apparent than ever that something is very wrong and Wanda is pulling the strings.

The episode’s aspect ratio transitions to a more modern one as we see what looks like present-day Westview. A portal opens in the sky and Geraldine’s body is launched through it, crashing to the ground. She is quickly surrounded by military personnel at what appears to be some kind of base as the episode comes to a close. 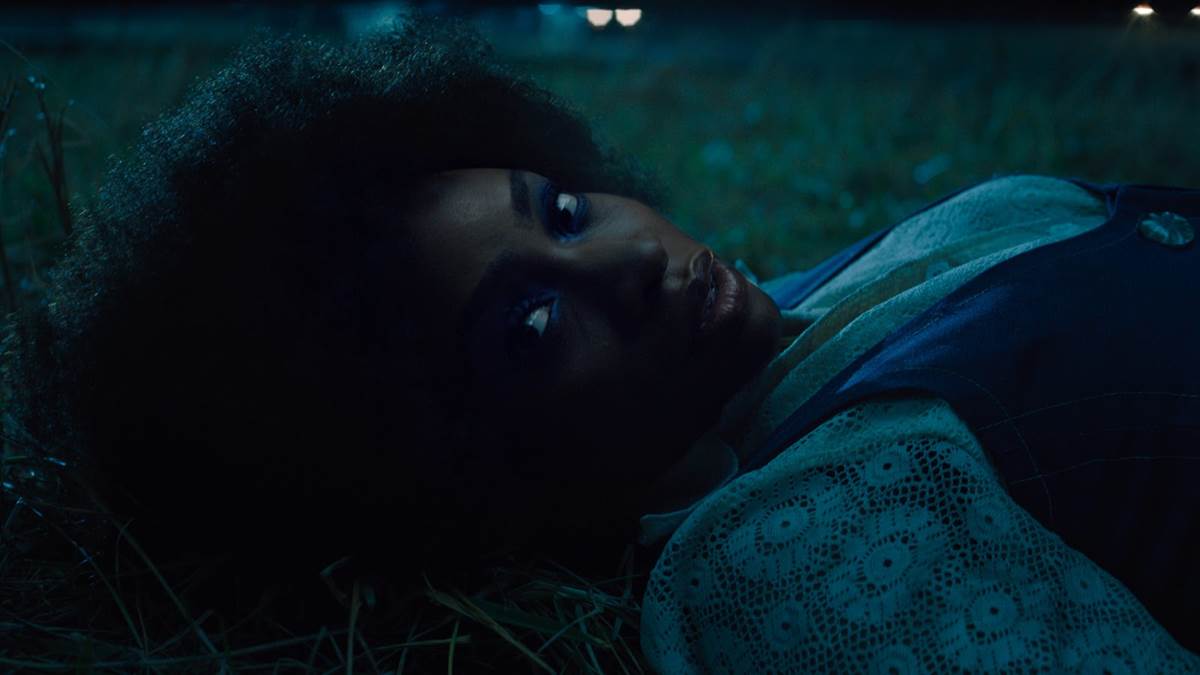 This is yet another hilarious episode of WandaVision, but it also progresses the story a great deal. Reality is becoming harder and harder for Wanda to control and things are starting to go haywire. Once again, the cast did a great job of fitting into the theme of the decade, giving us another great sitcom. Things look to be taking a bit of a turn going forward though and it seems we are headed for a much darker reality.

You can watch WandaVision on Disney+ now.