We're thrilled to announce our acquisition of #PlayingWithSharks, the feature-length documentary about conservationist, filmmaker, and Australian icon, Valerie Taylor, who became a trailblazing advocate for the ocean’s most maligned and misunderstood creatures. pic.twitter.com/LysrNLACdP

Inspired by the National Geographic Documentary Film Jane about the life and conservation impact of Dr. Jane Goodall, Australian producer Bettina Dalton wanted to create a similar piece about her country’s leading conservationist. Playing with Sharks, a Sundance Film Festival World Cinema Documentary Competition entry, chronicles the important work of Valerie Taylor. If you’re a movie buff, you may recognize her name as part of the team of ocean photographers that helped bring Steven Spielberg’s Jaws to life. That important moment in film history is part of this story, but at its core, it’s not just a profile of an incredible woman, but also tells the story of aging. 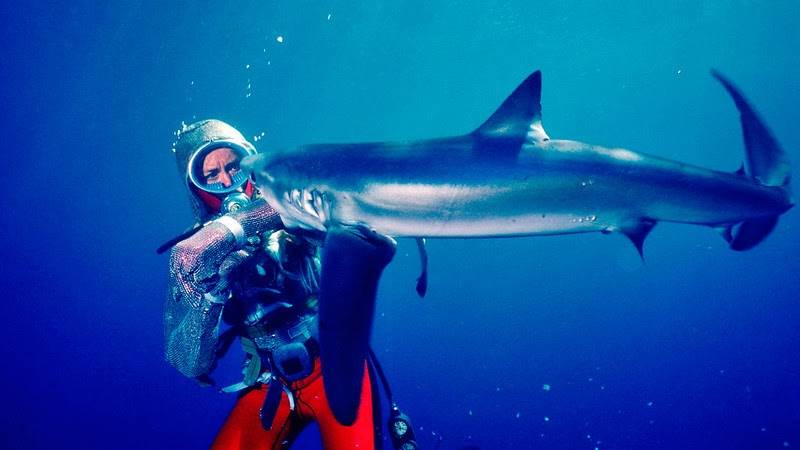 Valerie Taylor’s spearfishing hobby led to meeting the love of her life Ron, but both ocean lovers had a change of heart and shifted their focus to documenting and filming giants of the deep. Becoming experts in the field, Hollywood came calling on several film projects including Jaws, but public misconceptions about sharks ended up hurting the species. Shifting their focus again, Valerie made it her life’s work to create safe spaces for them and educate the world about the important role sharks play in our ecosystem.

With a mixture of archival footage from the Taylor’s, news footage, and recent interviews, Valerie’s amazing story comes to life. Her bold spirit led her to be a trailblazer for women in ocean exploration, carrying that torch into becoming a trailblazer for ocean conservation in general. Her hard work not only led to government protection of sparks in certain regions, but also the first ocean national parks. These safe spaces have created jobs and enriched local communities in addition to helping shark species rebound.

There are many eye opening moments in Playing with Sharks, from the diversity of personalities and behaviors within sharks to scientific discoveries that proved scientific theories wrong. One of their findings ended up being rejected at one point by National Geographic editors when experts claimed their discovery about shark jaw pressure to be a hoax, but they had video proof that a shark’s power comes from their teeth, not the pressure of their jaw.

Going into this, I thought National Geographic would be the ideal future home of Playing with Sharks, particularly as part of their SharkFest summer programming lineup. But having seen it, I would also say Peacock should be interested. Not only does a significant amount of the film cover the filming of Jaws and its impact, but it also has some incredible editing. Moments from the film are intercut with footage from Valerie and Ron doing the same things the protagonists do.

At the age of 78, Valerie Taylor shows no intentions of slowing down, but one of the profoundly beautiful moments in the film finds Valerie returning to the water in her signature pink wetsuit. Another brilliant intercut moment shows her preparing for her dives in her youth on her own to see a group effort needed today to help her get back in the water. While there’s a lot of beauty and grandeur in the film, it really comes back to Valerie at the center of the film and it’s so powerful

I give Playing with Sharks 5 out of 5 stars.