Movie Review: “Rita Moreno Just a Girl Who Decided to Go For It” is an Honest Look at the Icon’s Life, Executive Produced by Lin-Manuel Miranda

Rita Moreno returns to the big screen on December 10th, 2021 in Steven Spielberg’s adaptation of West Side Story, a film that earned her the O in her EGOT. A day before her 90th birthday, the trailblazing pioneer in film and civil rights will see her legendary career come full circle, but the journey to get there has been anything but easy. Premiering at the Sundance Film Festival, Rita Moreno: Just a Girl Who Decided to Go For It chronicles her unlikely rise to screen legend status in the star’s own words and with interviews from peers and admirers. 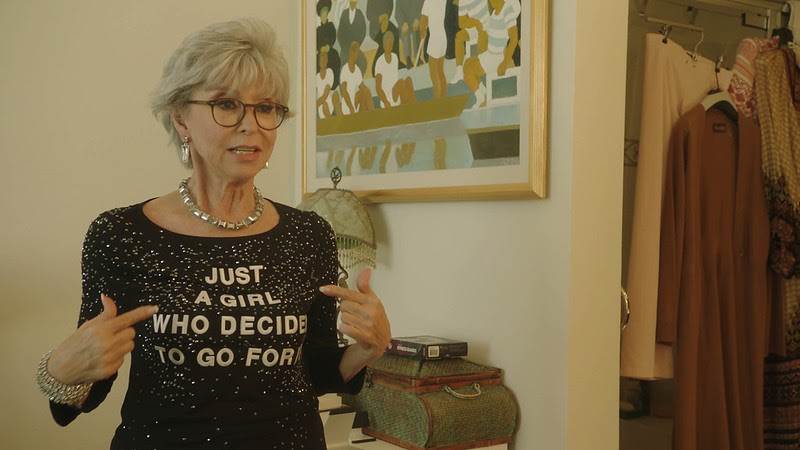 Animated paper dolls help bring her story to life, poignantly paralleling her earliest role as her mother’s personal dress-up doll. The motif continues through the very end of the film, which at one point shows just how brave, honest and rar Moreno is willing to get as she puts on her face while talking to the camera about how depressed she was in her seemingly happy marriage. Nothing is held back or reserved.

Commentators include Norman Lear and Lin-Manuel Miranda, who also serve as Executive Producers, as well as actors (Hector Elizondo, Mitzi Gaynor, Eva Longoria, Morgan Freeman, Whoopi Goldberg), musicians (Gloria Estefan), family, directors, managers and historians. Rita’s own interviews surrounding her 87th birthday, production on One Day at a Time and filming the remake of West Side Story are used as segues through the different eras of her life, told mostly in linear order.

The cinematography has an almost timeless esthetic to the new footage, which often lives side-by-side with archival clips from RIta Moreno’s career or even old newsreels to showcase the times she lived through. It’s an odd thing to be wowed by, but the text of the titles for each interviewee has a classic quality to it, almost feeling older than the high-definition digital age footage used alongside them. It’s just one of the many ways this documentary feels special.

Like the gem that she is, Rita’s documentary is a multi-faceted look at the complex aspects that make her so unique. She’s brutally honest about the racism she endured, the sexual abuse she suffered, the emotional manipulation of her public relationship with Marlon Brando, the importance of taking care of your mental health, and the need to speak out against injustice. There’s truly no single box you can put this icon in and the film makes that very clear.

With footage from her guest role on Disney’s Zorro, her Emmy-winning appearance on The Muppet Show, a visit to Jimmy Kimmy Live! and the importance of the remake of West Side Story, this film almost feels destined for Hulu. Disney loves synergy and it seems like the perfect place for this film to be embraced by the masses. After it gets its chance at a Best Documentary nomination at the Academy Awards, that is.

Director Mariem Pérez Riera’s title for the film came form a t-shirt, of all places, which is brought out at the very end of the film. It’s something Rita saw in a store one day that just spoke to her and she had to have it. It’s certainly a fitting phrase after seeing the bigger picture of her life. Rita Moreno: Just a Girl Who Decided to Go For It.

I give Rita Moreno: Just a Girl Who Decided to Go For It 5 out of 5 stars.