If you’ve ever wondered what it takes to be a wildlife photographer, the latest episode of the Overheard at National Geographic podcast is for you. In “Legends of Kingfishers, Otters, and Red-tailed Hawks,” host Peter Gwin has a heart-to-heart with photographer Charlie Hamilton James, who shares his unconventional entry into the workforce, stories from out in the field, and a personal tale of helping his son overcome a medical obstacle. While the title includes three animals, a fourth one is also included. For the purposes of this recap, I’ve broken out Charlie’s stories between the four animals as they relate to his life and career. 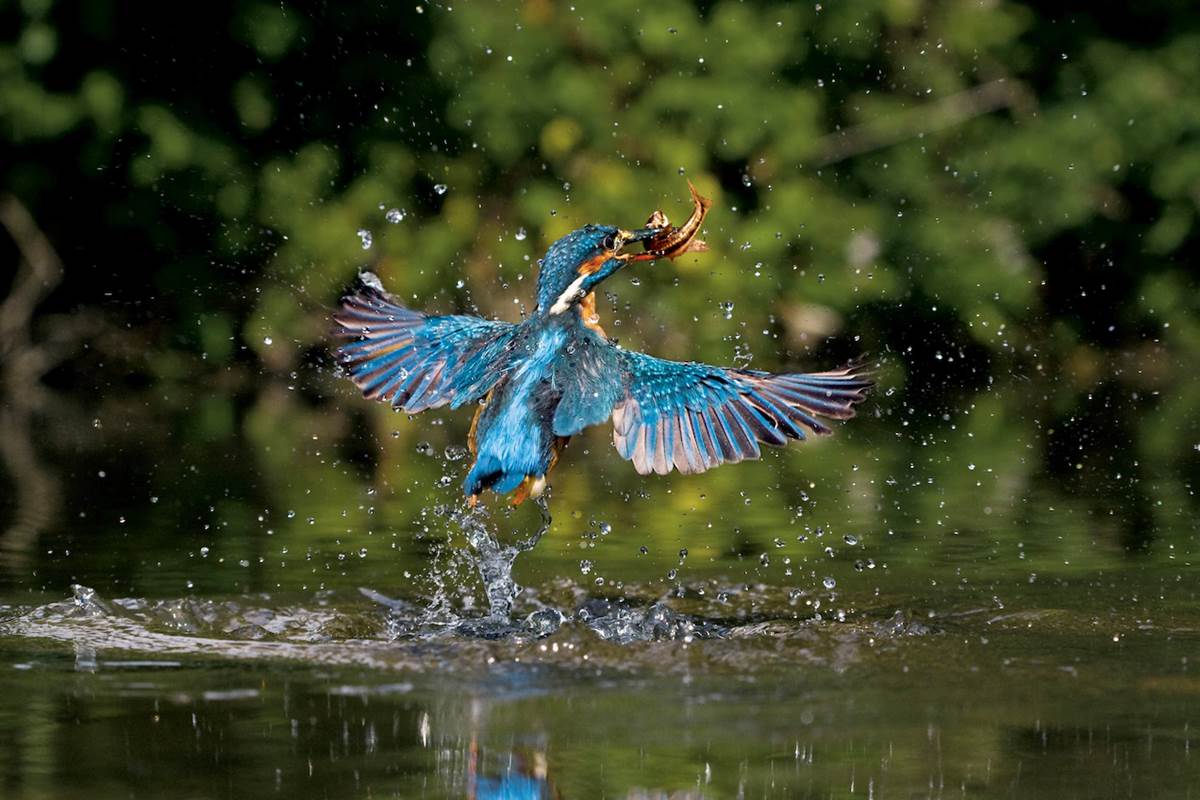 The most vibrant bird in the United Kingdom has shades of blue and green depending on the way the light reflects off them, but the pigment comes from oils, not the feathers themselves. Growing up in Bristol, England, Charlie Hamilton James found school difficult, with an attention span that wouldn’t work if he wasn’t interested. His main interest was Kingfishers and he would spend hours on the riverbanks with a camera photographing them. With his sights set on a career photographing wildlife, his mother wasn’t concerned by his rebellious nature against school, recognizing that a conventional education wouldn’t have much value for his future career.

While attending an event for other wildlife photographers, the young photographer realized that there wasn’t money in his career of choice and shifted his focus instead to filming Kingfishers. By the time he was 14, he was the go-to Kingfisher photographer for the BBC. It was Alastair Fothergill, creator of Planet Earth, who gave him his first job. By age 16, he was working for David Attenborough on the series The Trials of Life.

At 16, Charlie Hamilton James became obsessed with sea otters and even though he had rebelled against school, he received funding to do a 6-week research trip to film them. Like kingfishers, they’re not easy to film. He also shared that all these years later, he still gets assignments to document kingfishers and otters, having spent an entire year in his 30’s doing what he did in his teens.

While not included in the show’s title, vultures are actually the segue for Charlie Hamilton James from the BBC to National Geographic. While working for the BBC, he was sent to Kenya and Tanzania to produce a comedic documentary about the lives of vultures, but he soon found that the species was on a rapid decline. He had to fight for part of the narrative to include the dangers they face as a species, ultimately granted just 15-minutes to educate viewers.

When he arrived at National Geographic, they were interested in a similarly humorous look at the lives of vultures. But when Charlie Hamilton James pitched his story about the species in crisis, they were happy to shift gears and make that the focus of the piece. It also allowed the photographer to get creative, embedding a camera in the carcass of a zebra before the feeding frenzy could begin, capturing the first footage of what it’s like to be preyed upon by these carnivores.

The story of red-tailed hawks is actually very personal to Charlie Hamilton James, being about his son Fred. Since his early teenage years, his son had been interested in becoming a falconer, but it took a scary medical issue for the father to allow it. At 16, his son’s vision issues led to the discovery of a peach-sized brain tumor. Coming out of surgery, the first thing his son said to a nurse was that his name is Fred and he’s a falconer, even though he didn’t own a falcon.

Living in the United States now, Charlie Hamilton James shared some of the rules in place for owning a falcon, which includes requirements about having to catch them yourself in the wild. They have to be within the first year of their lives and they can’t have procreated yet. To make matters more complicated, Fred has his sights on a specific bird, a dark female red-tailed hawk. Charlie expected that this would be a lengthy process, but somewhat of a miracle occurred the next day when the exact type of bird, meeting all of the government’s requirements, got trapped by their garden fence. Now at the age of 19, Fred has his bird and is doing well.

This was another fun episode that explored the life of a National Geographic Explorer in more detail than you’ll get from one of their award-worthy documentaries or fascinating magazine or online articles. You can listen to this full episode and others at the official Overheard at National Geographic website.