What’s at the bottom of the sea? As a kid, a song taught me that there’s a whole lot of things inside including a flea-ridden frog on a log, but the truth is that we still don’t really know. In National Geographic Live’s latest virtual event, titled “Magnificent Seas,” fans get to hear from two experts through presentations and a live Q&A. The first presentation was given on March 30th, 2021, and if you missed out, you have another chance to attend the second and final presentation on Wednesday, March 31, at 10pm ET / 7pm PT. Click here to visit the official website for more details. What follows is a recap of this exciting event. 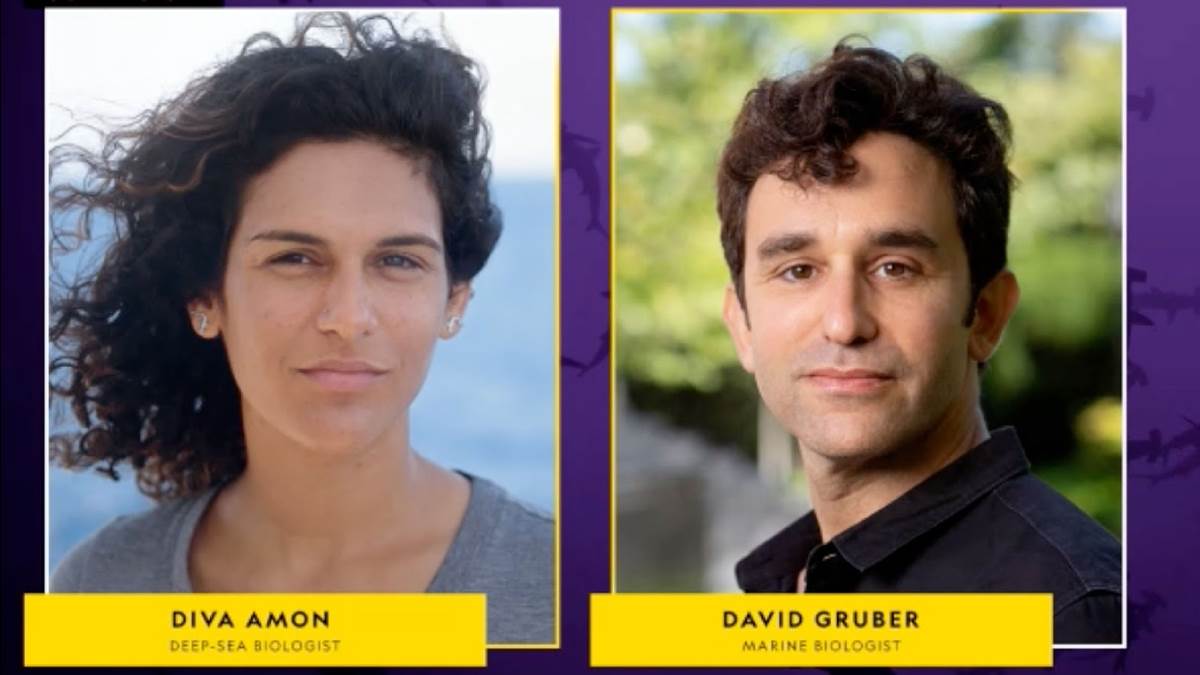 Marine Biologist David Gruber and Deep-Sea Biologist Diva Amon are the two special guests for “Magnificent Seas,” both of whom have seen some incredible sights. Moderated by Andrew Pudvah, Director of National Geographic Speakers Bureau, the event also included a bonus guest at the end, replacing the typical show and tell portion of the events.

James Cameron’s Avatar popularized the concept of bioluminescence and in the deepest parts of the ocean, there are organisms that use protein to create their own light. But David Gruber’s presentation mostly focused on biofluorescent creatures, which means these animals take the blue light in the ocean waters and transmit it back in different colors. He first encountered this phenomenon early in his career when his focus was on corals, which are still a passion of his. But he found it hard to get people excited about corals because they live a plant-like existence under water.

We know why animals are bioluminescent, evolving to live in areas with little-to-no light by creating their own. But why would an animal need to be biofluorescent? In the case of corals, it could be acting as a form of protection for the sun, like a sunscreen, or it could be used to attract fish that provide it with nutrients. In the case of the swell shark, a non-invasive underwater eye exam allowed David to create a camera that would reveal what these sharks see. It was discovered that their eyes interpret green light best, making the biofluorescent pattern a way to find other swell sharks, with males and females of the species having different patterns. As for the Hawksbill sea turtles, a similar eye exam was done. Their eyes see a wider spectrum of color and the cameras are still a work in progress, but David hopes understanding how these turtles see the world will solve the mystery of why they developed this magnificent ability.

The Abyss, another James Cameron film, explored what could be waiting for us at the deepest depths of the ocean, something Diva Amon has devoted her career to. It may not be extra-terrestrial aliens, but the life she’s exploring sometimes seem out of this world. Her goal is to not only find out what lives at the deepest depths of Earth’s oceans, but also to better understand how humans are impacting it.

96% of Earth’s livable space is underwater and over 80% is yet to be explored due to the challenges of studying it. But recent discoveries are showing that the ocean floor is not only more unique than first thought, but also incredibly biodiverse. Underwater lakes of brine, coral gardens that are thousands of years old and underwater mountains with thermal vents are some of the incredible sights captured recently by low-light camera rovers that can reach depths that humans can’t yet reach.

In the same way that we’re just now starting to understand the life that lives in the depths of our oceans, we’re also starting to see how humans are impacting these areas. Using sonar targets, Diva shared that one of her first exciting rover missions led them to a shipwreck full of human artifacts, which also became home to deep sea life. When another target was discovered, she was expecting to see another ship wreck. Instead, they found rusted washing machines, refrigerators and freezers, which spilled out of a lost shipping container and landed fathoms below. The seafloor is also littered with plastic debris, some of it microscopic from plastic materials that have been broken down by ocean currents.

Mankind's impact on the depths of our oceans is only just beginning, with metals used in cell phones and batteries increasing in need as we wean off fossil fuels. Deep sea mining is likely a very real future and part of Diva’s work has been examining an area the size of the United States between Hawaii and Mexico known as the Clarion-Clipton Zone. While helping to understand the animals that live in this area and their ecology, she has already helped discover around 1,000 species in the area, 900 of which were undocumented. The mining is as simple as scooping up potato-sized lumps of metal sitting on the seafloor, but she’s already discovered that these nodules are important to the area, becoming an anchor for organisms to attach to. The seafloor doesn’t change that much, with Diva showing a photo of a 26-year-old troll scar in the area that still looks fresh. It took millions of years for these nodules to end up where they are and if we excavate, the seafloor won’t recover for generations. It’s a serious con that companies and regulators will have to weigh in the future as these resources become even more scarce.

As a special bonus, Andrew Pudvah welcomed Jessica Cramp live from the Cook Islands, 3,000 miles south of Hawaii. As a shark activist, she helped create a 772 mile shark sanctuary. Standing on the beach in a wetsuit, she took viewers on a live dive around a coral reef with David and Diva commentating on the types of life she was able to find, which included butterfly fish, tangs, a flounder, a sea cucumber, and several species of coral.

If you enjoyed this recap, be sure to visit nationalgeographic.com/events to see their upcoming schedule of offerings so you can take part in a future event.