Touchstone and Beyond: A History of Disney’s “Mission to Mars”

Disneyland is set to reopen in just a couple of weeks, and what better way to prepare for Walt’s magic kingdom then to catch up with the big screen adaptation (of sorts) of the Disneyland attraction, Mission to Mars. 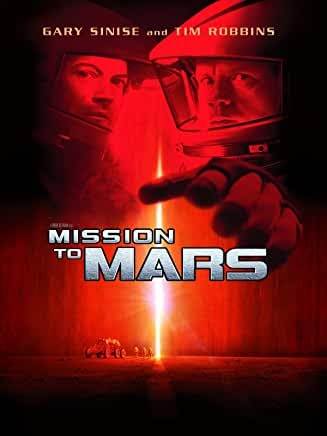 Mars 1 is about to launch and for the commander, Luke (Don Cheadle), he is excited for this historic opportunity. Celebrating with his last night on Earth, Luke is eager for the journey, but regrets that Jim (Gary Sinise) is not the one going. For years Jim and his wife Maggie (Kim Delaney) prepared for this mission, but with her untimely death, Jim pulled himself out of the mission and now Luke is set to make history.

The launch and journey to Mars is a success. Luke and his crew are testing radar on an unknown object on Mars when tragedy strikes the astronauts. Three of the four members of the team are killed and Luke’s whereabouts are unknown. Jim, Woody (Tim Robbins) Terri (Connie Nielsen) and Phil (Jerry O’Connell) prep a rescue mission to bring Luke home and to find out what happened on the surface of the red planet.

Their journey to Mars is dangerous and an engine explosion forces Jim, Phil, Woody, and Terri to abandon ship and access the orbiting Recon ship. It takes Woody sacrificing himself so that the other three can reach the orbiting craft, and for a moment, success looks fleeting. Once they land safely, the three find Luke in the Mars habitat. He cannot believe that they came for him, and the isolation has caused Luke to doubt for a moment the reality of the reunion. Luke quickly fills them in on what has been happening on the fourth planet from the sun.

The unknown force that killed his crew comes from a sculpted statue face on the surface of Mars. Together they determine that the unknown radio frequency that the face is emitting is testing the astronauts for a response. When the crew realizes what the answer is, they investigate the structure themselves. Phil is left behind in the escape craft while Terri, Luke, and Jim enter an unknown moment for humanity. Inside an all-white room is a being that will unlock the secrets of Earth and the cosmos.

I like movies about Mars, so Mission to Mars had me at the title. The visuals used to create the alien landscape are fantastic, and the technology seems realistic and not science fiction. I feel like the film used there NASA support well to present a realistic approach to how these missions would be conducted.

This film has multiple talented actors headlining the story, but for the life of me, none of them seem to be comfortable in their roles. While Tim Robbins shines as Woody, his death negates the joy he brought to the screen. Gary Sinise is a talented actor who can pretty much do anything on the big screen, but his Jim is a character that I just am not able to empathize with. I don’t dislike his character, I just have no feeling for him.

Brian De Palma is a fantastic director, but I feel like he was the wrong choice for this film. Gore Verbinski would have been a better choice. De Palma is too slow in his direction which makes the film drag and can cause the audience to lose interest in the story. There are moments of interest that hook the audience, like the meteor shower that hits the rescue ship, but the follow up to these dramatic moments are ridiculous. This billion dollar space ship that the astronauts fly doesn’t have a sophisticated computer that can identify where the leaks in the hull are? It takes Tim Robbins wandering around outside the ship and a leaking soft drink to find one of the leaks. Moreover, as the astronauts are ready for their Mars insertion orbit, the ship’s computer fails to identify a massive leak in the fuel lines which causes an explosion. How is that even possible.

The conclusion to the film is silly. There is no other way to describe the events that wrap up the movie. For one moment in a flashback scene, we hear Maggie describe how Mars has a deeper connection to Earth then we know of which leads to this disorganized and preposterous conclusion.

Mission to Mars gets a ½ Golden Popcorn Bucket rating. The film has a great cast, but the story falls short and the conclusion to the film is silly.

Next week with Earth Day coming soon, we look at A Civil Action. John Travolta plays a crusading lawyer who takes on chemical polluters in Massachusetts.