Touchstone and Beyond: A History of Disney’s “A Civil Action”

In commemoration of the upcoming Earth Day, we look back at 1999’s A Civil Action. This legal thriller is based on a true story and places John Travolta in the lead role as a crusading personal injury attorney trying to bring justice to families who have lost children from contaminated drinking water. 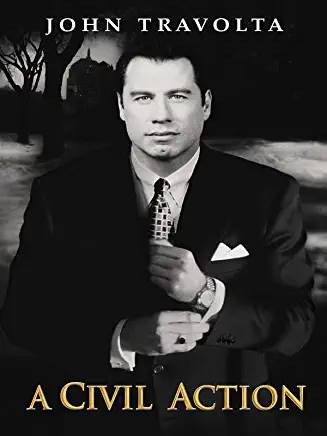 Attorney Jan Schlichtmann (John Travolta) is a successful personal injury lawyer in Boston. His small firm has done well, and Schlichtmann counts on the defendants in the cases he pursues to settle before count. He loves to win, and a recent case brought to the firm from nearby Woburn looks impossible to win,

The ever-confident Schlichtmann is convinced to take the case from Woburn not because of the heartbreaking story Woburn resident Anne Anderson (Kathleen Quinlan) tells him about the death of her son to leukemia from contaminated drinking water. Schlichtmann learns that Beatrice Foods and the W.R. Grace corporation have factories in the area which probably contaminated the drinking water, and they have deep pockets.

A case against Beatrice and WR Grace is a costly affair, and for Schlichtmann and his partners Kevin Conway, James Gordon, Bill Crowley (Tony Shalhoub, William H. Macy, Zelijko Ivanek) the Woburn case drains the firm’s coffers, and bankrupts the business.

The court case is a long and difficult road for Schlichtmann. Facing off against an adversary like Jerome Facher (Robert Duvall), Schlichtmann has a change of heart. Originally, he was all about the financial gain of settlements, but the more the case consumes his life, Schlichtmann wants justice for the families.

Beatrice Foods is dropped from the lawsuit and an eventual settlement with W.R. Grace is not enough to recover from financial ruin. The money means little to the families because no dollar amount will bring back their children. Forced out of his practice, Schlichtmann finds a way to prove his case against W.R. Grace and Beatrice with the help of the Environmental Protection Agency.

This movie needs a strong performance from John Travolta, and thankfully he does a fantastic job in bringing a composite version of the real-life Jan Schlichtmann. Travolta carries himself well throughout the film. From the hotshot successful lawyer at the start of the film to the downtrodden broke lonely man at the end, Travolta holds the attention of the viewers and gives humanity to a lawyer that would ordinarily be labelled as an ambulance chaser ghoul.

This is not a feelgood story. No matter how this movie is made, there is no happy ending for the characters of the story. Altering the reality to create a more cinematic success story could have been done. Thankfully, the filmmakers stuck to as much truth as possible. The reality of the story behind A Civil Action is negligence by corporations that caused the death of countless children. There is no way to enjoy this film because the reality of the story compels the viewer to not enjoy the film.

A Civil Action gets a 3 Golden Popcorn Bucket rating. It is not an easy film to sit through because the stakes are real and the pain of the families who lost children from the drinking water contamination is real. Director Steven Zaillian has a history of telling tough stories on the screen and his approach to A Civil Action does justice to the truth of the story.

Next week we look at Disney’s other flying superhero of 1991, The Rocketeer.