This week’s episode of Sydney to the Max proves that “The more things change, the more they stay the same.” In “My Own First Enemies,” Sydney and Max both deal with internet challenges, separated by 28 years of time. Here’s a recap of the latest episode of the Disney Channel sitcom. 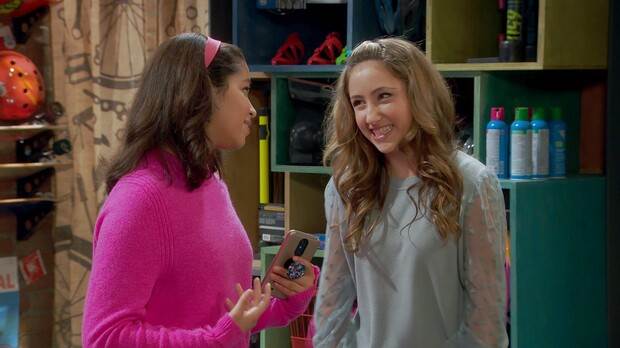 Sydney just finished a show at Reynold’s Rides and Olive thinks it was her best performance ever. Max is clearing tables when a woman approaches him and compliments him on how talented his daughter is. She introduces herself as Georgia and her daughter, Lily, really wants to get a picture with Sydney. Grandma Judy eavesdrops on the conversation as Max asks her out on a date, but Georgia was distracted by a text from her husband and didn’t hear him. “Too bad Max, you were this close,” she jokes, telling him he should get on a dating app if he wants to meet single women. Max tells her he prefers to meet people in person.

Sydney comes back into the shop and meets Lily, who says she’s her biggest fan and asks for a selfie. While talking, Lily begs Sydney to put her song, “Find My Own Way,” on the internet so she can listen to it anytime she wants. She’s resisted putting her music out there for fear of rejection, but the glowing comment makes her consider it. “Well the people have spoken,” Olive tells her.

At home, Max decided to take his mom’s advice and created a profile on a dating app. Judy asks to see it and reads out loud that he says he’s a single dad who likes cooking shows. She pretends to snore, offering to give his profile a “Glow-up,” which he refuses.

In her bedroom, Sydney is about to record her first video performance with Olive behind the camera. She’s so nervous that she messes up her introduction a few times, admitting to Olive that she fears bad reactions from strangers. Olive reminds her that everyone who hears “Find My Own Way” loves it. After recording it, Sydney wants to get out of the house and go see a movie, but Olive wants to watch the reactions to the video. Olive gets an alert that a lot of people are watching it and positive comments start pouring in. “Wow that is a lot, people really like my song,” Sydney says as she sits on the couch and tunes out the world around her.

At the bike shop, Max shares with his mom that he hasn’t had any interest in his dating account yet. She pulls out a list of changes he should make to make his profile look more interesting, which includes having won “Portland’s most eligible bachelor” in 2016 and 2018. He asks her what happened to 2017 and she says “Wow, for a guy with no dates, you sure are greedy.” Olive and Sydney walk in and the positive comments have gone to Sydney’s head. Max tells her she should be proud of the message her songs send, but she says she’s now more concerned about what her fans say. “I always knew I was a good songwriter, but it turns out I’m an incredible songwriter,” she says, promising to give her fans more music.

Filming her next performance, Sydney refers to her fans as “Syd Queens” and ends her introduction by saying “Like, comment, subscribe below.” Olive watches as the comments start to roll in and they’re all negative, pretending her phone died when Sydney grabs it and takes a look. “Leave You Behind is a boring song by a basic girl,” she reads. “I think everyone hates this song… This is exactly what I was afraid of posting my music.” Olive jokingly blames Lily.

In the kitchen, Max is getting a lot of interest in his new dating profile. “See? You did need your mother’s help to get dates,” Judy brags as Max struggles to pick an opening line. Sydney comes in and reveals she’s done writing songs, telling him about the bad comments.

The next day, Olive finds Sydney still bummed about the comments. She encourages Sydney to keep writing songs and Syd thinks the comments will be able to tell her exactly what to write next. Later, Sydney uses a marker board in her room to compare what people liked and didn’t like about the 2 songs. Max comes in and she plays him a little bit and it’s bad. She says she doesn’t like it either and he asks why she’s writing a song she doesn’t like. He encourages Sydney to be true to herself and says he’s inspired to change his dating profile back to the way it was, even if his mom says it was too vanilla. “You’ve inspired me to write a song about how vanilla is the most underrated flavor,” Sydney tells him. Later, Max finds Sydney writing songs the old way on her guitar and he gets a match on his profile, asking her to help with his opening line. “I don’t wanna see my dad flirt,” she tells him.

Max is working alone in the arcade when Bucky comes in looking for Leo. He just got his instant messenger account and wanted to give Leo his screen name, explaining it to Max, who thinks instant messenger is lame. Bucky writes it down and asks Max to pass it on to Leo. “I am, for sure, never going to IM,” he says as Alisha walks in wearing her uniform from her new job. She tells Max that she loves instant messaging and he says he does too. She writes down her username, “GRLPower,” and he says he will message her tonight.

At home, Max dials up the internet and messages “grlpower” when his mom comes in and says she can’t use the phone because he’s on the internet. He explains that he’s messaging Alisha and it’s important. She tells him he’s flirting and he asks her to get out, saying “I don’t want my mom to see me flirting.” She checks back in again later and they’re still talking. “It’s so much easier to talk to girls when you don’t have to actually look at them,” he tells her. Max says he’s going to tell Alisha he likes her and his mom thinks he should do it in person, but he does it anyway. The response is “I really like you too, you’re a really good friend.” He adds that he likes her as more than a friend and “grlpower” says they feel the same. “Oh my gosh, she like-likes you!,” his mom exclaims as Max makes plans to have lunch with them tomorrow in the food court at the mall.

The next day, Alisha walks into the arcade and Max asks if she’s ready for lunch, but she says she already ate. She says she didn’t get a message from him last night when Bucky walks in, saying his username is “grlpower,” an abbreviation of “Grill Power” because he loves grilling with his dad, while Alisha’s username is “GRLPower,” an abbreviation of “Girl Power.” Bucky is psyched that Max is having lunch with him. “You may not have noticed but I don’t have a lot of friends…. I think of you as a best friend, too.” Bucky suggests they have a sleepover as Max takes his lunch break with his new friend.

Sydney to the Max returns on April 30th with an episode called “The Hair Switch Project.” Here’s the official episode description from Disney Channel:

In the new episode, Sydney begins to question her straight hairstyle after her classmate Jada suggests that she try wearing her hair naturally sometimes. This sends Sydney on a hair journey tied to her cultural identity and memories of her late mom, Alisha. Her dad Max tries to help, but Sydney is still at a loss and calls on her grandmother Maya. Back in the ’90s, young Alisha is faced with a different hair dilemma when school picture day rolls around, and her mom has booked a salon appointment for her to get a relaxer. Alisha doesn’t know what to do because she loves her naturally coifed hair and feels like she loses a piece of herself every time she gets it straightened. 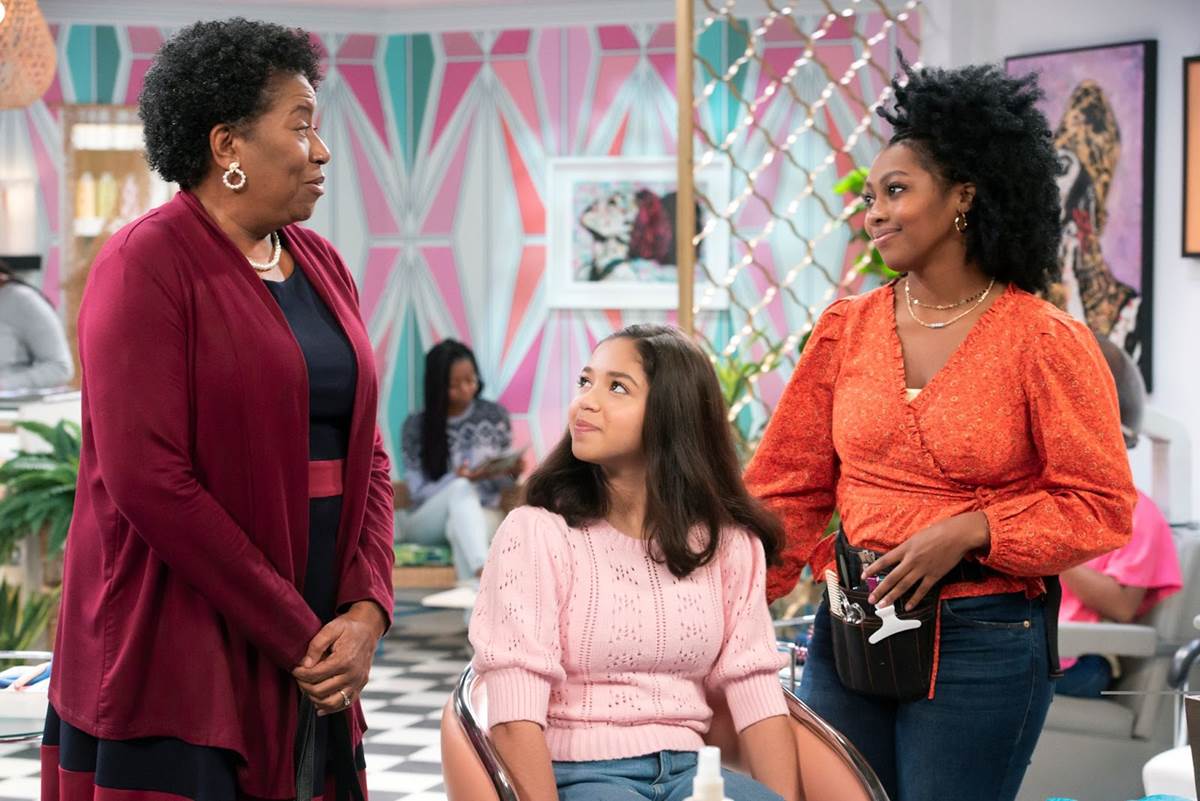