Set to debut on April 30th, exclusively on Disney+, 22 Vs. Earth is a new short set before the events of Soul, the original short is directed by 21-year Pixar veteran Kevin Nolting. In the short, 22 defies the rules of The Great Before and refuses to go to Earth, enlisting a gang of five other new souls in her attempt at rebellion. However, as her cohorts' activities lead to unexpected results, 22’s subversive plot may actually lead to a surprising revelation about the meaning of life.

Kevin Nolting, who served as Director of 22 Vs. Earth, has a lengthy history at Pixar, assisting with the editing of films starting with Finding Nemo, Cars, and WALL-E before finding himself in charge of the editing of Up, Inside Out, and Soul. He also served on the production leadership team of Toy Story 4, was on the story trust of the SparkShort Loop, and was also a creative advisor for Soul.

I was fortunate enough to be able to sit with Kevin for a few minutes and ask him some questions, not only about the short, but also how he found himself in the director’s chair for this new adventure. 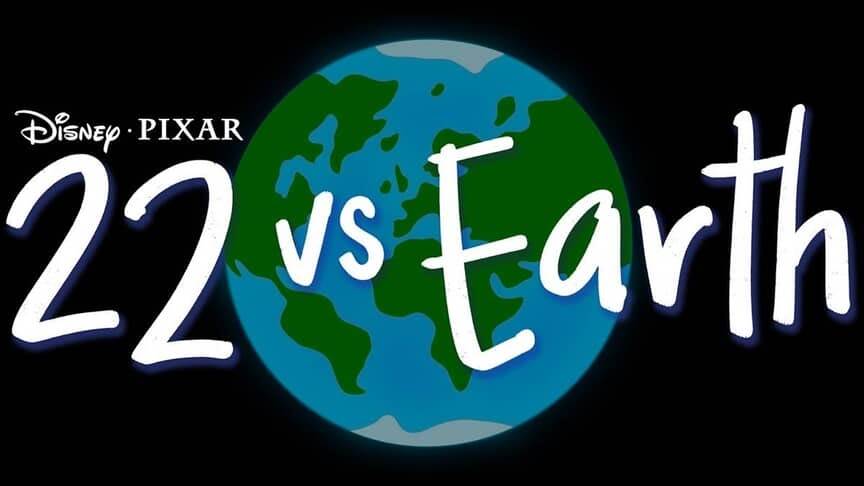 What can you tell me about 22 Vs. Earth?

I can tell you that it was an idea, although we didn’t talk about doing a short while we were making Soul, it was a conversation constantly about 22’s backstory. We delve deeply into Joe’s story in Soul, it’s his movie, and we explore his family and just the context of his life. And 22, we love the character but we had a lot of funny conversations about what made her the way she is. That’s why those little gags, I love those little gags, with the mentors that we do have in Soul, so…when we talked about doing a short for the feature, it was sort of a natural place to go just to explore her backstory a little bit.

A little bit about yourself Kevin, you were an editor on Soul, as well as some others including [WALL-E]…How do you make the jump from editor to director of a short?

For me it was lucky enough to be in the right place at the right time. Traditionally, these shorts would go to the head of story to direct. That's been the path. Fortunately for me, our head of story had just directed her own great short, Purl, and she was in development already developing something else for Pixar so she wasn’t available. I just happened to be in the room when we were talking about it so that’s how that came about.

A lot of fans and people who enjoyed [Soul] had a lot of questions afterward that were [unanswered] which is perfect in my opinion, but for the short you opted to do more of a prequel instead of a sequel to see what happened afterward, we saw what happened before. What was the idea behind that?

You know, I’ve heard this and it came up. We’ve had a lot of discussions, we even had an ending where – only on paper, we never actually even boarded it I don’t think – where you saw where 22 went on Earth. Oh actually, there was one little thing that was boarded. It was ultimately, to us, it was more satisfying to leave it open to the audience and I’m glad we went that way. Personally, for the short I didn’t want to go there. Had Pete [Docter] wanted to, I certainly would have but I was more interested in what makes a person like 22 be that way, frankly.

[In the short, 22 forms a group of souls and gives themselves a name, “Apocalypse.” Which is a long, drawn out acronym.]

What does Apocalypse stand for again?

Again, we go to the Hall of Everything in this short, where the bulk of the easter eggs are found in Soul, is there anything new to look out for in 22 Vs. Earth?

The only thing I put there consciously were two camera moves that were direct lifts from Apocalypse Now, other than that I don’t have anything there…A lot of times they can be there, a lot of people [hide things] and I just wouldn’t know.

It looked like everybody came back for the short. Tina Fey, the Counselors, even Trent Reznor and Atticus Ross. Was this all done beforehand while Soul was being produced or did everybody return?

Tina returned but it was very close. What we did was, the way we had scheduled the short was we started in February/March of 2020 and as departments wrapped up the feature, we would grab great people before they went on vacation because they were familiar with the movie, we had assets all ready to go. You know, the whole pipeline at Pixar is pretty complicated and so if you can do these things all at once, it's much easier than coming back a year later and reactivating everything. We just sort of followed along as Soul finished, we sort of trailed along and made use, and kept the sets open for a more weeks and followed it that way… we actually hit our schedules on both the short and the feature amazingly enough, because you know, we had to go home mid-stream. It was pretty amazing.

Regardless of how banal it is, I’m curious. What is the meaning of life?

(Laughing) I can’t – I leave that purposely open ended and for me that’s such a moving target that what I say right now would change after I get off this call.

You can watch the interview below, and you might be able to find out what the meaning of life is for yourself when you watch 22 Vs. Earth, streaming on Disney+ on April 30th.