Robert A. Iger, Executive Chairman of The Walt Disney Company and Chairman of the Board of Directors, was given an honorary award today at the Clio Awards. Held virtually, his acceptance of the award came with a conversation led by Asad Ayaz, President of Marketing at The Walt Disney Studios and fellow Clio award winner. Here is a recap of the conversation. 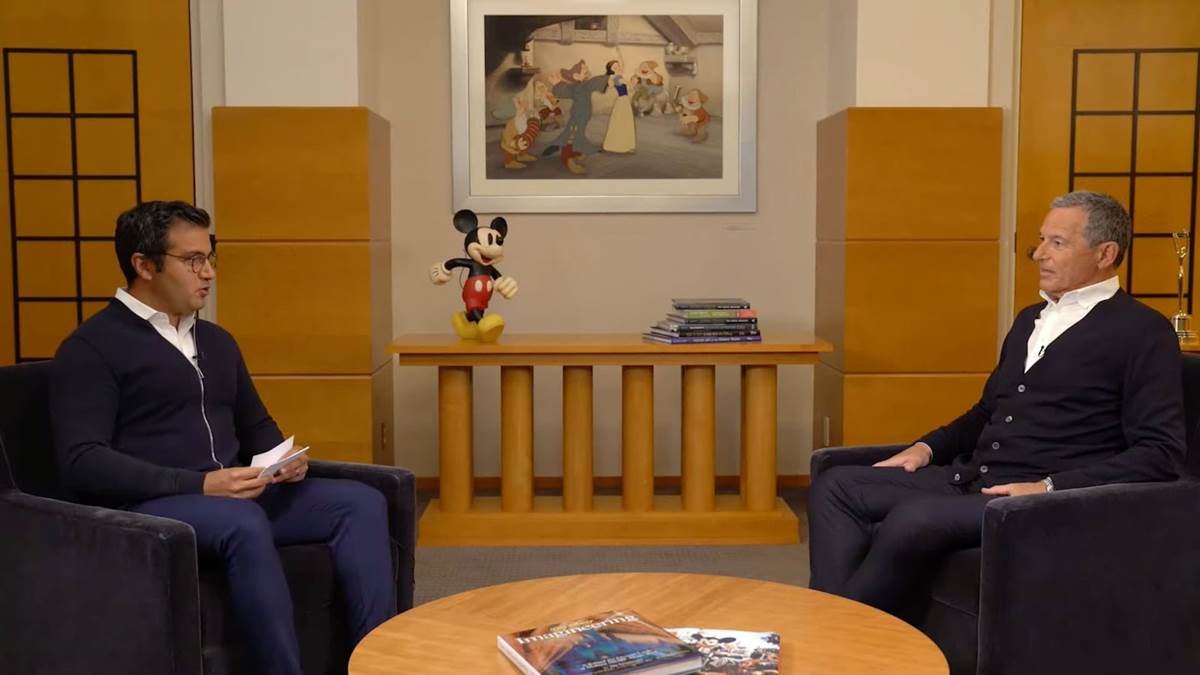 Following a sizzle reel highlighting Bob Iger’s accomplishments throughout his career, Asad’s first question was about the pandemic and what changes Bob expects to last. “I think people have gotten used to living life a different way,” primarily speaking to the way people consume media now. Ad-based television, for example, was on its way out prior to the pandemic and is now back in a big way, something he thinks is here to stay for a while. Another big change is he thinks people won’t be as interested in long commutes after over a year of being able to work from home.

Quoting his book, The Ride of a Lifetime, the next question was about Bob’s optimistic leadership principles. “There were days during the pandemic where I think it was just difficult to be an optimist,” Iger explained, sharing that part of the dynamic of being a good leader and leading with optimism is the ability to be candid.

Having stepped back from his former role as CEO, Asad asked why Iger chose to step back into more of a creative role. He shared that the success of the company has always been born of their creativity. “I felt, in thinking about ultimately leaving Disney, that the best thing I could do… was to ensure that our creative pipeline was as rich as it could be.” Iger found it hard to stay involved in the creative process while also fulfilling his CEO duties and a silver lining was that selecting a new CEO while still with the company made for a better succession plan. Over the last fourteen months, Iger has been working solely on the creative side of the company. “I must say, it’s been a lot of fun and looking back on the decision, I’m really glad I did it.”

One of the fun questions thrown to Bob was about what other job he would want within Disney. Going back to his roots, Iger shared that he started with ABC as a weatherman with the goal of being a TV anchor, but found he wasn’t as good at it as he thought. Even though he gave up that dream, it’s still inside him. “I would say, the one thing that I would like to do, is be a weatherman on one of our television stations or Good Morning America.” He shared that he has made jokes with managers of Disney’s TV networks that he will be knocking on their doors someday asking for an on-camera job.

Founded in 1923, The Walt Disney Company is fast approaching its 100th anniversary. Asad asked Iger about the company’s ability to celebrate the past while also staying relevant in the modern era. He said they can’t think of Disney’s legacy as an anchor or it will deter them to innovate, instead embracing the past while also embracing the future. “It’s a delicate balance and an important one.” One of the key phrases he said was Disney has to be “Respectful but not reverent.” In summing up the answer, Iger said “We have to continue to evolve because the world is not standing still, it will continue to evolve.”

Asked about his own creativity, Bob shared that he doesn’t consider himself to be all that creative. “In my role, I’m mostly an editor, nor a creator. I don’t necessarily come up with the ideas.” He shared that this role is nothing new for him, something he’s done for nearly 47 years since his days with ABC. Being in the business has taught him how to speak the language of creative people and also how to be confident in his decisions. “You can have an impact on the creative process without destroying it or insulting the creator or critiquing,” he added about the tricky nature of his role.

While some may see some of Disney’s moves as playing things safe, Iger said that everything the company does is a risk with no scientific or mathematical equation to success. “You have to understand that with risk comes both success and failure. And you have to understand as well that in failure, it’s not necessarily the end of a business or the end of a company… It’s how you process failure that becomes more important than creative success.”

Speaking about the biggest risk of his career, Iger chose a subject that’s pretty recent in the span of his career: the launch of Disney+. It required three components to be a success, none of which were a given. First, they had to develop the technology, creating a product that not only worked, but was easy to use. Second, people had to want it and be willing to pay for it, as the first major studio with their own streaming service to compete with Netflix. And third, there was the creative risk of making original content that people would actually want to watch. “It was almost a triple threat from a risk perspective and it’s incredible that it all worked out… and worked out great.”

For his next answer, Iger dove a little deeper into his past when asked about the craziest idea he ever heard, one he actually greenlit. Steven Bochco, creator of Doogie Howser, M.D., pitched an idea for a singing police drama and because ABC had recently found success with another big risk, Twin Peaks, he said okay.“I thought we could do anything, including a singing police drama.” But he shared that when he finally saw Cop Rock, it took less than 10-minutes for him to realize it wasn’t going to work. It lasted for 11 episodes.

As the president of marketing, Asad Ayaz was curious to know Bob Iger’s favorite piece of creative marketing, Disney or otherwise. Perhaps because it’s fresh in his mind, Iger chose Marvel’s Shang-Chi and the Legend of the Ten Rings, commending Ayaz’s team on pairing incredible visuals from the film with music that sounds authentic. “I think using a Chinese composer of that music did the trick. It was tremendous.”

Asked where he feels the most inspired, Bob Iger shared that he prefers to be at work surrounded by people. “I feel most inspired by surrounding myself with some of the most creative people in the world.” Listing off all of Disney’s brands, including the theme parks and Imagineering and all of the various studios, he said there’s no shortage of creativity at any given time. “We have so many directions to turn to be inspired by different creative artists…. They all inspire me, every day.”

For the final question, Iger was asked about the voice or voices he listens to. “I’m a believer in not one voice, but many voices. That no one person has all the answers or all the advice that you need.” His secret to success has been to surround himself with experienced people with their own unique passions and visions. However, there was one name that he dropped. “No one’s more important than my wife, Willow, who has incredible wisdom. And combined with her knowledge of who I am and what’s important to me, it’s pretty powerful to have someone in your life who is as wise and as knowing of me as she is.”