Mother’s Day is upon us and what better way to celebrate and commemorate our moms then with 1995’s family comedy Father of the Bride Part II. Steve Martin returns as the titular George Banks. Unexpected pregnancies complicate George’s plans for retirement and have him rethink his future. 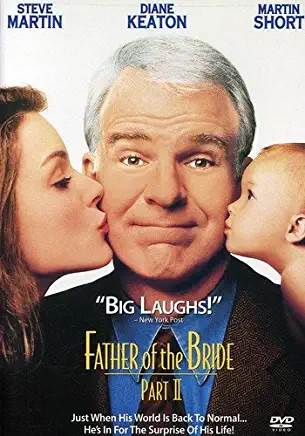 George Banks (Steve Martin) has a midlife crisis. His daughter Annie (Kimberley Williams-Paisley) announces she is pregnant, and in a midst of panic, George gets a makeover and tries to act younger. His youthful energy with his wife Nina (Diane Keaton) leads to a memorable night that will change their lives forever.

They sell their family home thinking about the next step to retirement, only to learn that Nina is pregnant and due a month after Annie. The idea of being a father again so late in life leads George worried, but he pulls it together. Buying back the family home, the Banks family settles in waiting for their lives to change.

Franck (Steve Martin) is hired to throw Nina and Annie a baby shower and remodels the baby suite for the newest Banks to come. The time ticks by and soon Annie has moved back home while her husband Brian (George Newbern) has gone off on a last-minute business trip.

With multiple false labors, Annie finally goes into labor for real, and the whole family including Franck race to the hospital. About to see the birth of his grandchild, George is thrown another curveball as Nina goes into labor. Reassured by Dr. Eisenberg (Jane Adams) that everything will be okay, George waits outside the delivery rooms while his grandchild and child are brought into the world.

Two months later the family comes together one more time to see Annie and Brian and their son George as they leave for Boston, while George Sr., Nina, Matty (Kieran Culkin) settle into a new life with baby Megan. The middle-aged George realizes that life is complicated but good.

This is Steve Martin’s movie. His comedic timing, his angst and neurotic tendencies light up the screen. Viewers may cringe at his irrational behavior, but you can’t help but love George Banks. What makes this father role different from others is how Martin makes George a decent person who tends to go overboard on his reactions. His poor responses to life changing events are funny but the man is someone who cares deeply about his family.

Diane Keaton has elevated her role of Nina and made the mother of the bride a much more powerful force in the film. The movie is told from George’s perspective, but there are several moments that Keaton makes use of the screen time to demonstrate how much the pregnancy is going to change her life. When they visit with Annie and Brian, Nina can’t contain her fear and finally puts George in his place. George and Nina are ideal parents, and thanks to Steve Martin and Diane Keaton viewers will look to their characters for decades to come as entertaining and genuine people.

Martin Short’s Franck is yet again hilarious while heartwarming. Unlike the first film where we see Franck dominate the wedding, here we meet Franck on a much more personal level. It’s easy to see how Franck can become part of the family, and why he and George ultimately bond. I would love to see outtakes from the scene where Martin Short is carrying the comatose Steve Martin around on his back. This scene has so much physical comedy and proves why Martin Short is a brilliant comedian.

Jane Adams doesn’t show up until Annie and Nina go into labor, but she stands out in her role as Doctor Eisenberg. George see’s Dr. Eisenberg as too young to be able to safely deliver the kids, but Jane Adams plays her character well with confidence and empathy. She knows how to deal with erratic fathers on one of the most special and stressful days. With only a few scenes she puts George at ease, and safely delivers his new child. How much of an impact did the doctor make on George and Nina? They name their daughter after her. Only a few moments of screen time but Jane Adams nails her role with perfection.

If you have kids and are sentimental, maybe you want to skip Father of the Bride Part II. You will no doubt get emotional.

Roger Ebert may have said that Father of the Bride Part II wasn’t as good as the original, but he was wrong. Not only does the sequel equal the 1991 film, it surpasses the original in quality and heart allowing the characters to evolve and grow. Father of the Bride Part II shows audiences that life continues to change. No matter how hard you plan, life can be unexpected. You must learn to live with and role with the flow of life. George Banks is a great character because he is silly but represents a lot of the insecurity that everyone feels.

Father of the Bride Part II gets an outstanding 4 Golden Popcorn Bucket rating.

With the recent news of a Chinese rocket about to crash on Earth this weekend, next week we look at a film that takes us to the cosmos. The 1997 collaboration with Tri Star Pictures asks the question, do you want to live forever? Find out if we do with Starship Troopers.