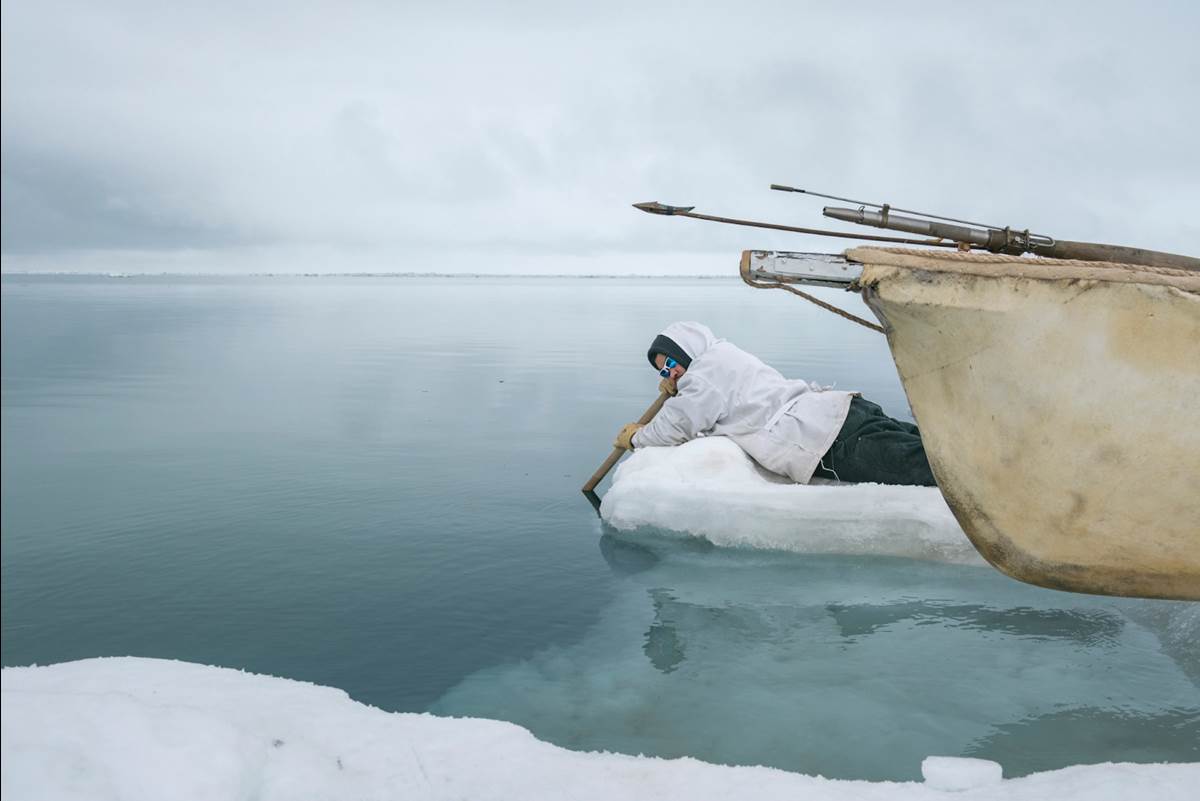 Overheard at National Geographic takes listeners to Utqiagvik, Alaska in the newest episode, titled “Camping on Sea Ice with Whale Hunters.” Hosed by senior editor Eli Chen, this episode goes behind the scenes of a 2018 magazine article called “Meet the Bowhead Whale Hunters of Northern Alaska.” National Geographic photographer Kiliii Yuyan spent 10-months over the course of 5 years with the indiginous Inupiaq hunters, camping on ice to hunt for their main food source.

For Kiliii Yuyan, part of the excitement for this assignment was the chance to spend time with indiginous peoples, which felt in many ways like getting back to his roots. He is a descendant of the Nainai tribe, indiginous people who lived along the HeilongJiang River, which separates China and Russia, and his family moved to the United States as refugees during the Communist Revolution. He remembers his grandmother sharing folktales from his culture with him as a child, which included a story about a hero named Kiliii, a man who could shapeshift into an orca.

Although it might seem shocking and surprising, whale hunting is a centuries old tradition for Inupiaq, who hunt an average of 6 to 7 whales per season. Living in the arctic, there’s little access to fruits and vegetables so whale skin and blubber is a major part of their diet, in addition to seals and walruses. Commercial whaling had a big impact on the bowhead whale population, but the Inupiaq are careful not to overhunt, with rules that include not targeting pregnant females. Protecting the species is important to them not only for their survival, but also for their culture, which includes a 3-day spring festival that honors the gifts of the whales.

“I came in thinking that this would be a great story about whaling and the whale hunt and realized eventually that what it was really about was community,” Kiliii Yuyan says in the episode. “About how community comes together and about the relationship between the bowhead whale and the Inupiaq people.”

Climate change has had a big impact on the Inupiaq, who navigate through long stretches of sea ice and camp there in order to hunt whales. They typically use traditional long boats called umiaks to get close to a whale and spear it, tying a rope on its tail to drag the 60 ton animal back to the shore. A series of pulleys and a team of around 50 people are required to get the whale up onto the sheet ice, which has always been prone to breaking under the weight of a whale. But with the density of the sea ice becoming thinner, it’s becoming a lot harder to do. Last season, for the first time ever, the Inupiaq had to use a motorized boat to even find whales because the ice had melted so much by the time the whales began their migration that they couldn’t get close enough to them using traditional methods.

Another climate-related challenge is known as an “Ivu” to Inupiaq, a word to describe the ice they’re camping on breaking and floating out to sea. Kiliii Yuyan explained that they had to sleep fully dressed every night in case they needed to make a quick break. When it happened during his time with the Inupiaq, it took them about 15 minutes to pack everything up and get into skin boats while the ice they were on began to move. Sometimes a plate of ice that’s several miles across will crash into another large plate of ice, causing up to a 3-mile radius of structural damage.

Climate change has also caused other arctic animals to change their behaviors to adapt. Kiliii described almost becoming a polar bear’s dinner one day when he was photographing the Inupiaq cutting down an ice mountain. A polar bear snuck up on them and a hunter acted fast to take down the predator. Polar bear attacks on humans used to be very rare, but melting ice has made it harder for them to prey on seals, leading them to attack people more frequently out of desperation.