The Italian Riviera is calling and you can visit it virtually on June 18th in Pixar Animation Studios’ newest animated feature, Luca. “It was our goal to transport the audience to Italy,” producer Andrea Warren revealed during an early look at the upcoming film. As with all of Pixar’s films, respectful representation was top of mind as Luca morphed off the drawing board and into an animated masterpiece. “One thing that we wanted to get right, of course, is the specificity of Italian culture,” director Enrico Casarosa explained, having grown up in the Ligurian Riviera where the story is set. “We wanted to make sure that we had consultants to also check in. One, for example, gestures… We made sure to want to capture the fun of Italian gesticulation. The other was also the language and we had really great help in finding ways to bring fun Italian language. We use cognates often, things that we can all understand in both languages. We wanted to add a lot of flavor. We also had fun finding kid swears… the idea of Giulia swearing with cheese – ‘Mozzarella, pecorino, gorgonzola’ – We really had a lot of fun finding silly little kid versions of words. And also the signs… There are really fun ways to put a bit of language. There are even some Ligurian dialects we were able to put in there making it very authentic and specific.”

Animation Supervisor Mike Venturini was part of the team that helped flavor the film with distinctly Italian gestures. “It wouldn’t be a film about Italy if we didn’t include gesticulation and talking with our hands,” Mike explained. “Working from home provided us the exciting opportunity to use Zoom to meet with our Disney Italy colleagues and have a conversation about gesticulation and talking with our hands.” Reference video footage was distributed to all of the animators to inspire the hand gestures of the characters in Portorosso.

It wasn’t just the animators who had to work from home, but also the voice cast. But another silver lining of the process for Enrique was that it made it easier to add some Italian voices to the film since all recording sessions were done remotely. “Our Villain, Saverio Raimondo, is a very funny satirist and comedian from Italy, he just has a comedic flair,” the director shared. “We wanted to make sure he’s villainous, but also very funny. Marco Barricelli is our low voice, deep voiced Massimo. He’s actually a theater actor here in California. We also fell in love with how strong and low and effortlessly menacing his voice is.” 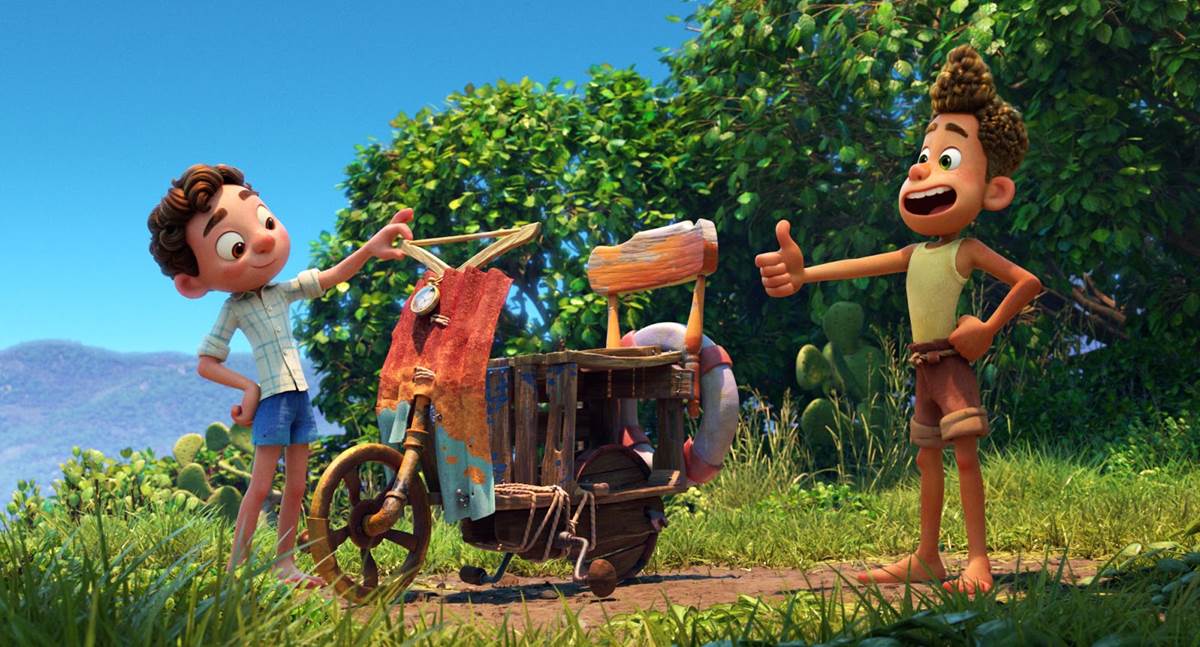 Two research trips were taken to Italy in 2016 and 2019, helping the team not only create their fictional town, but also pay tribute to the people and culture of the region. “We all fell in love with the people of the area,” production designer Daniela Strijleva shared, explaining that she grew up in Italy, but wasn’t as familiar with the region Enrico was inspired by. “Our designs are of working class people, something that I feel defines all of Enrico’s stories. We gave everyone a specific job… We looked at a lot of Italian neorealist films and also we looked at films of Jacques Tati because there’s so much pantomime… We had a lot of fun capturing the gestures and the humor of those interactions.”

The majority of Pixar’s artists weren’t able to take a trip to Italy, but in addition to sharing their experiences with the rest of the team, films and food helped bring some of the culture back to Emeryville. “We wanted to make sure that the team was inspired by the setting,” producer Andrea Warren explained. “We did what you had to do, we ate a lot of pasta, we ate a lot of gelato… But we also really enjoyed watching Italian films from the period in which the film takes place, one of them was Big Deal on Madonna Street.”

Like most viewers, Luca is new to the Ligurian Riviera when he steps out of the sea. Even though the world is very stylized, research trips didn’t end at the shoreline. “We also went on fishing trips, we took a lot of dips in the sea,” Daniela Strijleva shared. “It’s really important to do that because we wanted to capture what makes the Mediterranean so unique, especially the colors, the blues and the greens, it’s such a beautiful and unique place.” “I have so many little details that I'm, like, ‘Ooh, this one is very specific and people in Liguria would probably understand,’” Enrique continued about Luca, his love letter to the seaside community where he grew up. “It's a wonderful city, it's a wonderful area of the world. It really goes so well with our ethos of authenticity and specificity to embrace these wonderful details. We want to take people in an authentic way to a place.”

You can take that authentic and specific journey to Portorosso with Luca and Alberto when Pixar’s Luca arrives on Disney+ on June 18th.