Disney’s Cruella brings some new characters into the 101 Dalmatians world, one of whom is Artie, played by John McCrea. With a keen eye on style and trends, Artie quickly becomes a close confidant for Cruella, helping her create some of her incredible looks in the film. I had the pleasure of speaking with John McCrea about his role in the film ahead of its May 28th premiere in theaters and on Disney+ with Premier Access. You can read our full interview below and also see our video interview at the bottom of this post. 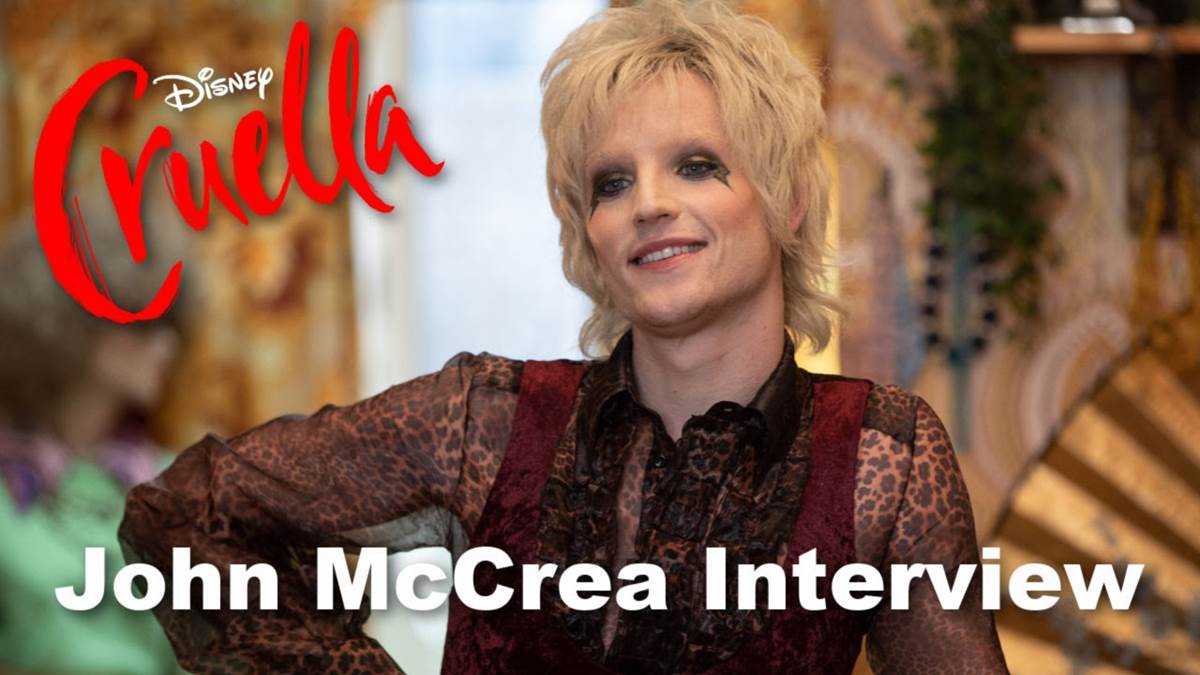 Benji: What was your reaction when you found out you were going to get to join the world of Cruella de Vil?

Benji: What's interesting about your character is that he and Cruella are kindred spirits. How did you make your character so dynamic without overshadowing the over-the-top qualities of Cruella?

John McCrea: I think when you are an actor, it becomes like a sixth sense of feeling the energy of the room and letting that feed you. And there was certainly a certain amount of… When you were in that room with Emma Stone and she's acting alongside you, you can't help but pick up what she's doing and mirror her slightly. And yeah, I think that he is a wonderfully dynamic character, but those things should always be played subtly, in my opinion. Because I think, especially on film, it can become too big. So I just tried to… And it's such an intimacy. There's only two of us in the shop most of the time when we're talking to one another. It would have been slightly strange to do anything too flamboyant or too big or too distracting, because you wouldn't necessarily do that.

Benji: Artie is one of the few new characters in the film. You have Cruella, you expect Roger and Anita and Horace and Jasper. What role did you have in creating this brand-new character in a world we've known since the 1960s from 101 Dalmatians?

John McCrea: t was a really, really collaborative experience with Craig [Gillespie] and there was lots of improvisation on set, and that's always where you find terrifying, but fun. I think a lot of it was on the page, though, in terms of Artie as a character. I think they knew what kind of character they were trying to portray. And I think I just came in and sort of maybe did what they were looking for.

Benji: Some of my favorite moments, without giving anything away, are when Artie interacts with Horace and Jasper. You can see that he doesn't quite know where he fits in with Cruella’s gang.

John McCrea: Yeah. I think actually if you were to speculate on afterwards, I think him and Horace are great mates now. I thought they were all one big family of misfits, and probably more have been added since.

Benji: Do you hope you get to reprise the role of Artie someday, potentially in a sequel?

John McCrea: Yeah. I think it would be definitely interesting to see… It's left open in a way that you could really go anywhere and do anything with it. But you also feel completely satisfied at the end of the movie, like you've been told an entire story. It doesn't leave you thinking anything's unsaid or undone. So I think it would be wonderful to see where those characters go. And also perhaps could be one of the worst ideas, one of the best ideas, but to see… Because it's set in the ‘70s, such an iconic period of time, and things change. Visually, things change. And she's a fashion designer. So it'd be really interesting to see how she evolves in her craft.

Benji: Artie has a wide range of fashion in the film. Can you talk about what it was like to wear all those amazing costumes?

John McCrea: It was wonderful. It was so exciting to go into all his costume fittings and try on all the amazing stuff that Jenny Beavan had found or made. There's no one quite like her. And her attention to detail in every single character in this movie was astounding. So obviously, it was one of my favorite parts of the day getting into makeup and getting the costume on because you really feel so dropped into it. That's such a wonderful thing for you as an actor. And obviously the majority of the time when you do jobs, you are wearing relatively normal clothes. So it was a real tool to have in the back pocket. It helped me get into character for sure.

Benji: Early social reaction has come out already of the film and there’s a lot of buzz about your character. What has your reaction been to the overwhelmingly positive reaction to your performance?

John McCrea: I haven't seen it. I stay away from that stuff. So it's lovely to hear, but I didn't know that was even happening, but that's nice. I'm glad, because I think he's wonderful and I think he's great. And I think he's a joy to play and a joy to see on screen. And hopefully when the film comes out officially on Friday, people will really enjoy it, enjoy him. Because he's a nice bit of lightheartedness in the film for sure.

Benji: Well, congratulations on your role in Cruella and we look forward to seeing more of you in the future.

John McCrea: Thank you very much.

You can see Disney’s Cruella in theaters and on Disney+ through Premier Access beginning May 28th.