Disney’s Launchpad program recently debuted on Disney+, giving filmmakers from underrepresented backgrounds the chance to create their own short film and get it in front of a wide audience. Among the six new shorts streaming on Disney+ is Growing Fangs, directed by Ann Marie Pace. The director of this teenage vampire short film took the time to answer a few questions about the inspiration behind her short and how she was able to get Cristela Alonzo in her film. 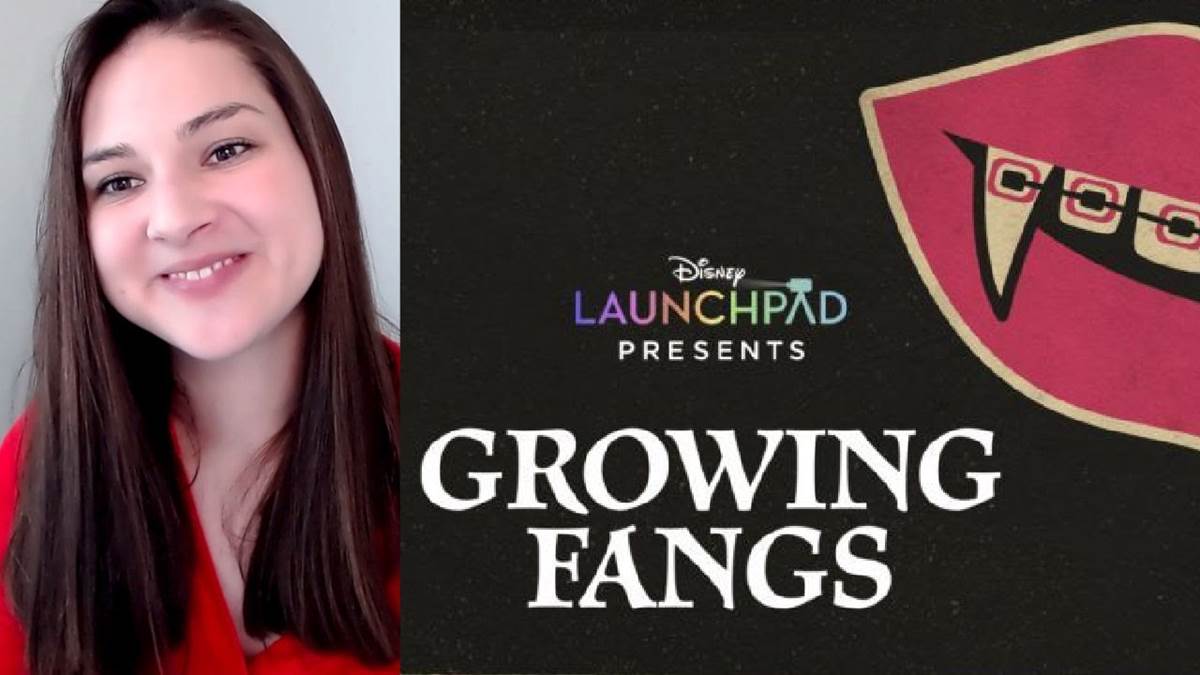 Alex: What was the inspiration behind Growing Fangs?

Ann Marie Pace: The story is about a girl who is half-human and half-vampire. And for me, what that experience translated into was growing up, I am Mexican American and bisexual. I always felt in between identities and not really sure where I belonged in those identities. Something I had to learn later in life was being a part of multiple identities doesn't make you any less of that identity and it all compounds. It makes you who you are. So, I wanted Val to sort of go on this journey and experience and learn that.

Alex: There are really two parts of Val that she’s trying to hide, her human/vampire sides and her sexuality. Do you think there’s a point in her future where she can comfortably be her true self and not feel like she has to hide a part of her?

Ann Marie Pace: Absolutely. If the story could continue, I think that's exactly what she would be trying to explore. And I think when you are able to do that, fully accepting yourself and who you are, it inspires others to do the same. So, that's where I would hope that the world would go, where more people are inspired and more people are coming to realize who they are fully.

Alex: The story includes a mascot that is offensive to Val. Was that a difficult story point to find or did it happen very organically?

Ann Marie Pace: Yeah. Well, actually the mascot I wanted specifically was something that changed a bit through the story. Obviously in filmmaking, the story grows and changes as you're developing and through filming and whatever else, but the cool thing about it was the heart and the message always stayed the same. And I actually worked with my mentors and whatever else to get to this level of having her put on this mask and be this mascot, which felt very metaphoric to what she's feeling, of always having to wear a mask and not be seen for her true self. So, it felt like the perfect tool in that moment to me.

Alex: I'm a big fan of Cristela Alonzo, who plays Val's mom in the short. What was it like casting and working with her?

Ann Marie Pace: Oh my gosh, Cristela Alonzo has always been one of my biggest inspirations. She is a Mexican-American comedian who starred in, produced, and wrote her own ABC series. And obviously, I've known that and looked up to her and we actually got to develop a close working relationship even before this short, where she became such a mentor to me. And the fact that she was a part of this project, it meant so much. And it just said a lot of what this program is about, of helping one another and helping the next generation tell their own stories. I felt so special and that whole day on set, I was laughing so much. Oh my gosh, she's hilarious.

Alex: You got to work with some cool visual effects and makeup on this short. What was the most complicated part of that process?

Ann Marie Pace: It was definitely a lot of talk and prep before, especially with the visual effects. And luckily, that's where Milan came on set for a couple of days to help us and sort of give advice and whatever else. But there was a lot of problem solving with levitating, for example. When she levitates at the breakfast scene, we finally came to this solution that we'd have two guys in green suits holding a board and that's how we'd levitate her and be able to pull it out. But a lot of it is just having the idea in your head and being able to translate it and tell other people, and tell a storyboard artist to storyboard it out, and then have the actor feel real and truth in it. And when you can get that right, I think it becomes really magical when you see the end piece and just see the worlds come to life with the effects of the magic added. That was a really cool experience to see all that together.

Growing Fangs is now streaming on Disney+ along with five additional Disney Launchpad short films. You can watch the full interview with Ann Marie Pace below.