The highly-anticipated (hey, in some circles it is!) return of Holey Moley is upon us, and the fan-favorite reality series brings back all the familiar fun that we have come to know and love out of the only extreme mini-golf challenge on television with Holey Moley 3D In 2D! 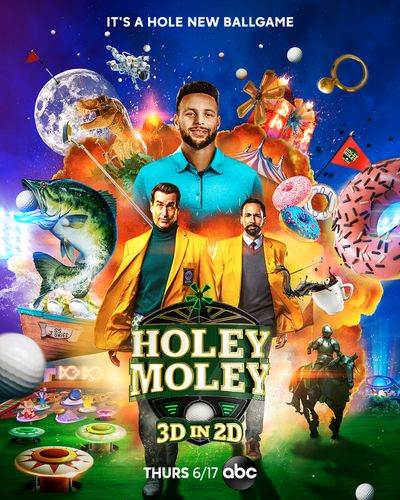 For those who aren’t familiar with this gem of unscripted television, Holey Moley sees competitors take on massive individual mini-golf holes on a giant course that is one part mini-golf and one part Wipeout.

Now in its third season, aptly named Holey Moley 3D in 2D, hosts and commentators Joe Tessitore and Rob Riggle return once again to give us the laugh out loud play by play and color commentary that are the show’s signature as the competitors make their way through tournament play for a chance at $250,000 dollars. Jeannie Mai returns for course-side commentary, and resident golf pro (and exec. Producer) Stephen Curry also comes back (not in animated form like last season) to help handout the coveted green jacket and golden putter to winners of each episode. It should be noted that much like the second season, 8 players begin head to head on individual holes, working their way down until only two players compete for the jacket and putter. We the viewer will not see every hole on the course in a single episode, and each episode offers a different array of the oversized challenges. Last season we saw golfers lit on fire in “Dragon’s Breath,” electrocuted at “Frankenputt’s” lab, and the introduction of Double Dutch Courage, which added additional blades to the windmills of an already challenging hole that was notorious for sending players violently into a row of tulips in the first season, and would now provide the opportunity to send players flying into a pool below. 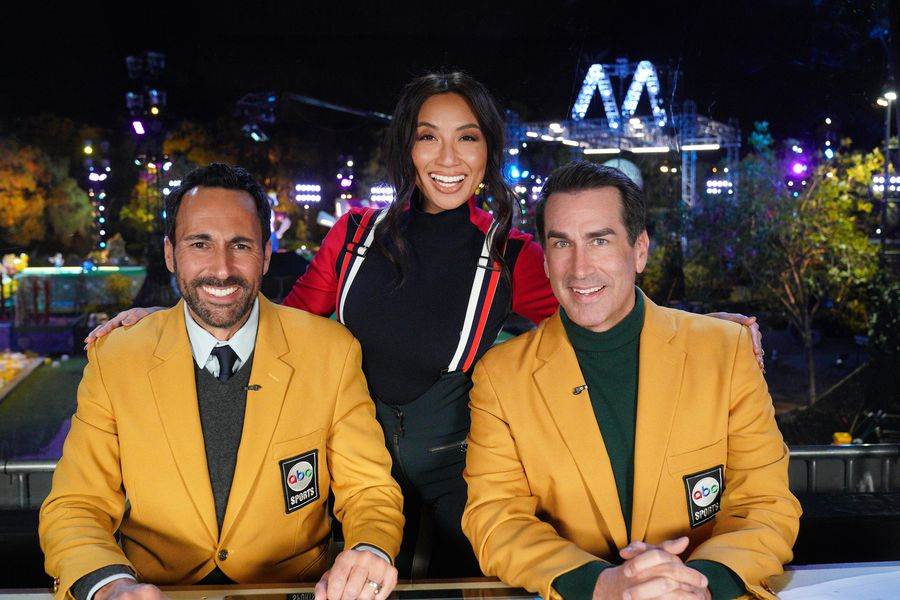 Along with giving Riggle control of a new telestrator where he can draw freely on replays John Madden-style (and not necessarily for reasons directly related to the competition), this season also introduces newer stat screens as players are about to go head to head that also feature “Rob’s Opinions” at the bottom of them in a blink and you’ll miss it blurb that will work well for next day replays on Hulu.

But let’s be honest. Aside from the brilliantly hilarious commentary and dynamic between Tessitore and Riggle, we’re really watching for the crazy challenges that are the holes of the miniature golf course, with each season introducing the new holes we’ll see, and so far this season we’ve seen a few as well as some modified returning favorites. 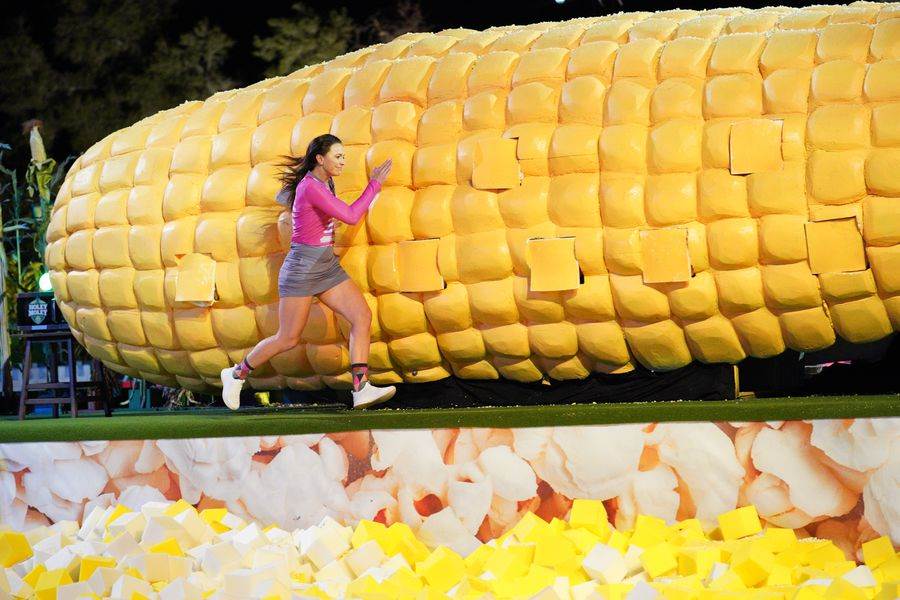 Advertising for the new season promises 12 new holes, but the new hole that seems to be the marketing darling of the new season is Corn Hole. Similar to last season’s Hole Number Two which sees contestants putt down a long straight and narrow green and then have to sprint past obstacles (namely, port-a-potty doors flying open by Holey Moley mascot occupants). In the new hole, the port-a-potties have been replaced by a lengthy corn cob adjacent to a pit of foam kernels. At a certain point, thanks to an attached microwave, the kernels on the cob will blast suddenly into popcorn and will (likely) knock contestants off the narrow green with force, launching them into the kernels below. While every hole has some kind of challenge, some have more of a skill needed. In Agony of Defeat, players have to ride down a makeshift ski jump that will abruptly end and launch the players into the icy depths of the pool below but it’s up to the contestants to use this launch to their advantage with the player who travels farther getting a better spot to putt from for their shot. As is usually the case with such a hole, despite whatever skill the player may have, it will likely not go as planned. 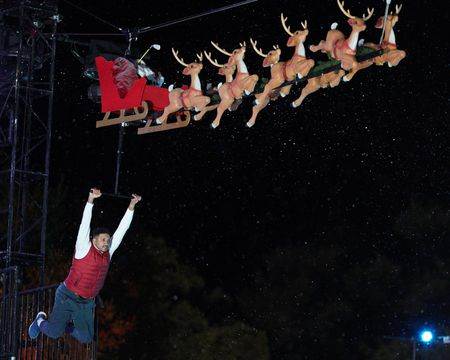 Though Holey Moley is a fantastic Summer hit, it’s never too early for Christmas, and Ho Ho Hole brings in the holiday cheer, though it may seem a little familiar to regular viewers of the show. Contestants putt up a wall and watch it cascade down Plinko-style, hoping to go right down the chimney for a better spot on the green, or at least the “nice: slot instead of the “naughty” one. Then, to reach their ball, players must hop aboard Santa’s sleigh and get whisked away to the North Pole, or into it rather. If they end up in the water, it’s a stroke penalty when they make it to the holiday themed living room green. Fans of the show may think that this sounds awfully similar to Polcano, but don’t worry, they aren’t the only ones. Rob and Joe are also quick to notice the striking similarities to the hole featured in prior seasons. 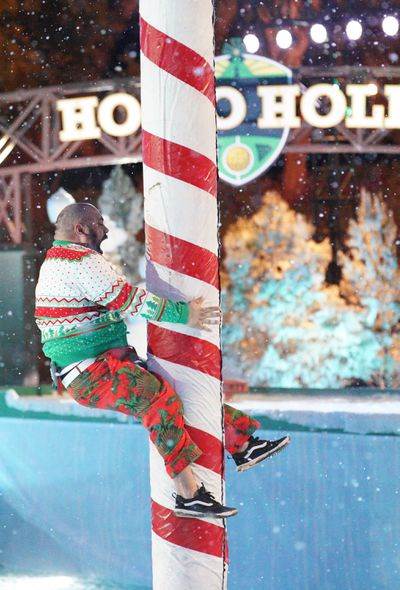 Over at Turfing USA, players must putt along a cresting wave to the green, and then catch up to their ball by hopping aboard a surfboard and balance as they are towed across a pool. Water cannons wait to blast the players in the process, assuming they make it that far that is. 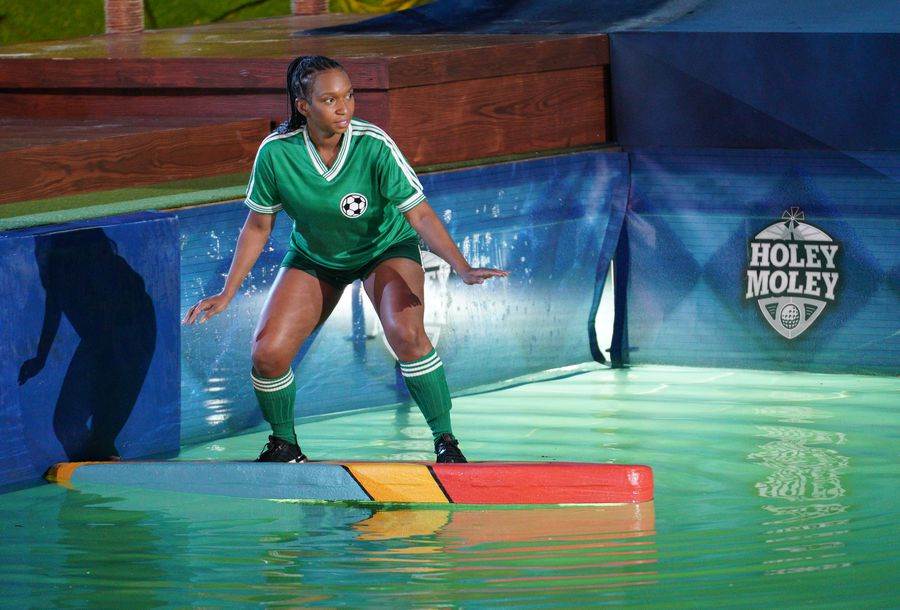 Last season saw the evolution of 1st season hit, Dutch Courage, into Double Dutch Courage with the addition of a 5th blade on the two windmills, as well as a drawbridge that is pulled back so players must jump to and through the second windmill. Well, this season the drawbridge is gone, and oh, they set the whole thing on FIRE. Dutch Courage En Fuego is literally the same hole that has become synonymous with the show, just set aflame. Blasts of fire occur as players make their way through the challenge, but personally I’d like it better if there was even more fire a la last season’s Dragons Breath. Maybe for season 4. While not entirely “new” this season, Hole Number Two has seen some changes. The premise of sending a player running past outhouse doors that fling open is much the same, but now they will be launched into a pit of “raw sewage” if they don’t make it to the green in time. 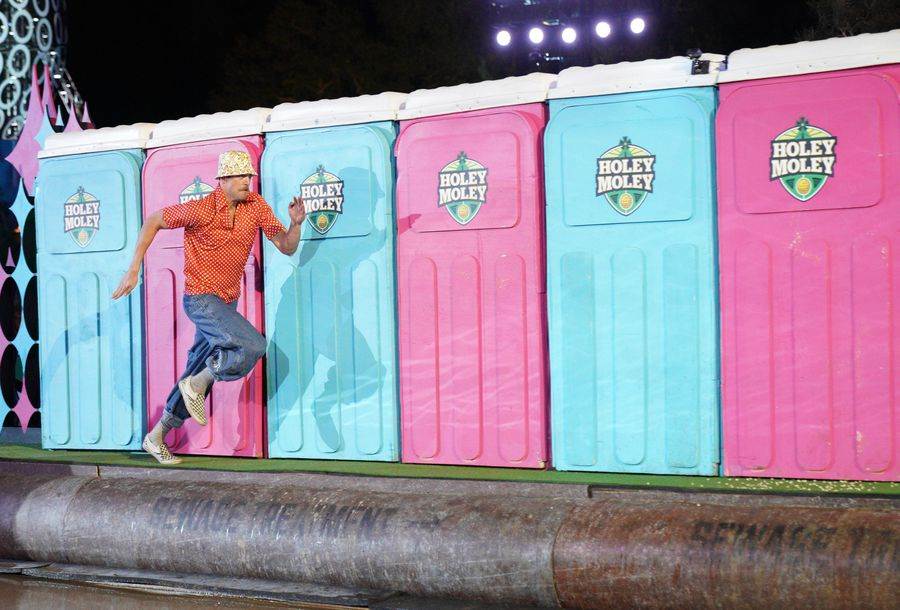 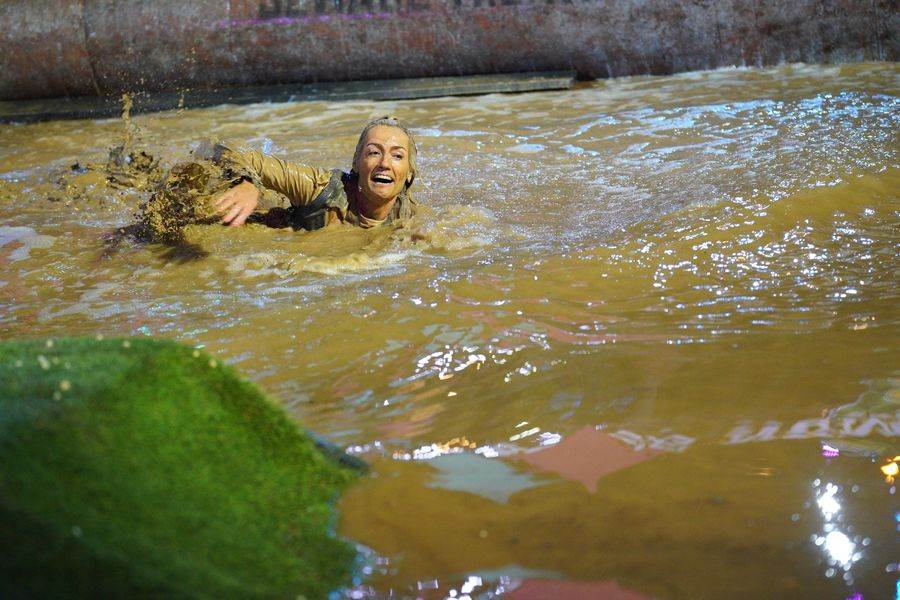 Completely new for the season though is Holey Matrimony, where players (so far, we’ve seen a couple take on the challenge and we hope this is true for every time we see this hole) go head to head but to get to their balls on the green, but to do so, must run down the aisle (in this case, a super charged treadmill) towards a giant, spinning, ring. Once players get to the ring, they must then jump to the wedding cake and onto the green. Once again, if they do not complete this, it’s a stroke penalty. 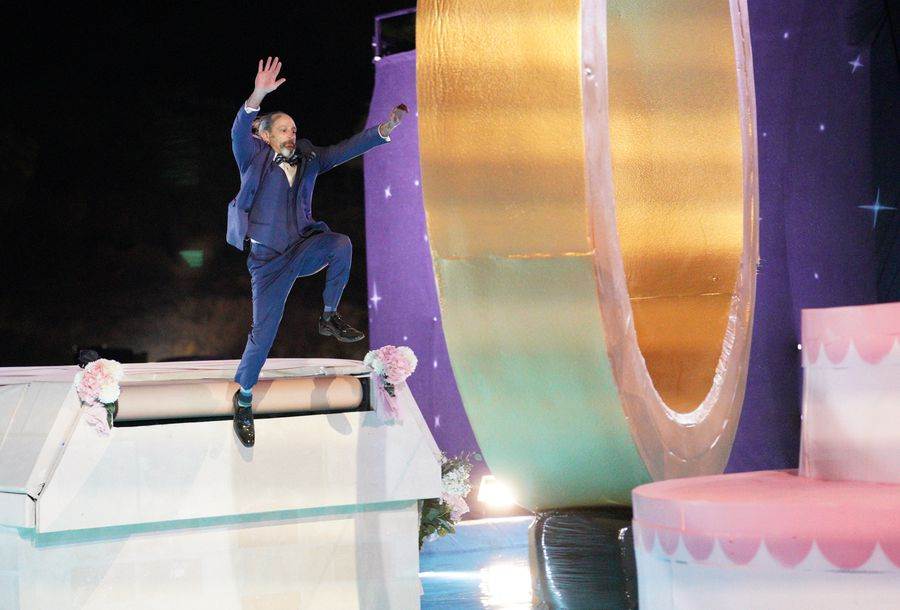 Down at the ole’ Fishing Hole, challengers must putt to the green but to get there, cross a bridge full of jumping fish and water cannons. It’s reminiscent of last season’s Putter Ducky, but somehow seems easier. Remember to strike the pose when going in the water though! 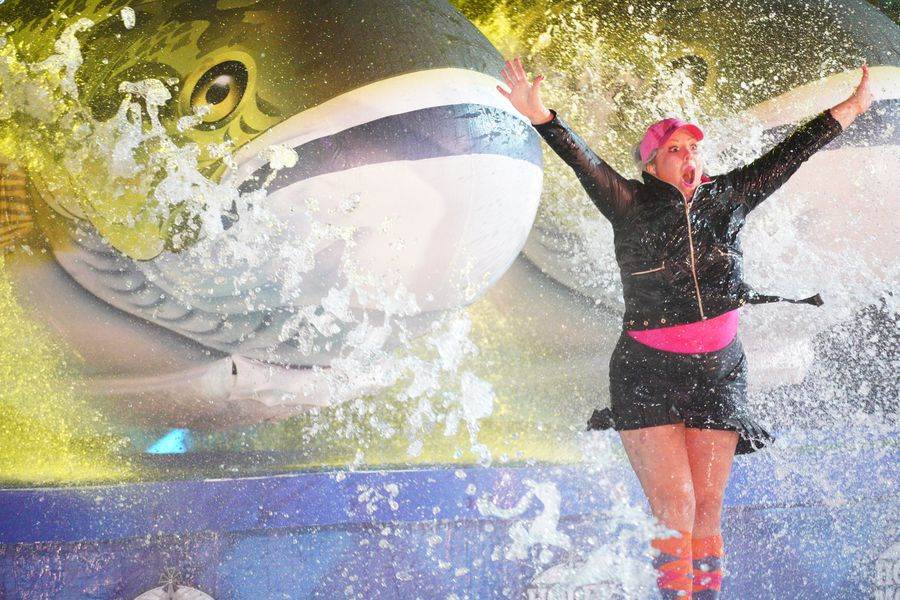 Sir Goph has rounded up all his mascot friends and they have become part of King Parthur’s Court. The hole itself seems simple enough, it’s the whole jousting against Sir Puttsalot that seems challenging. 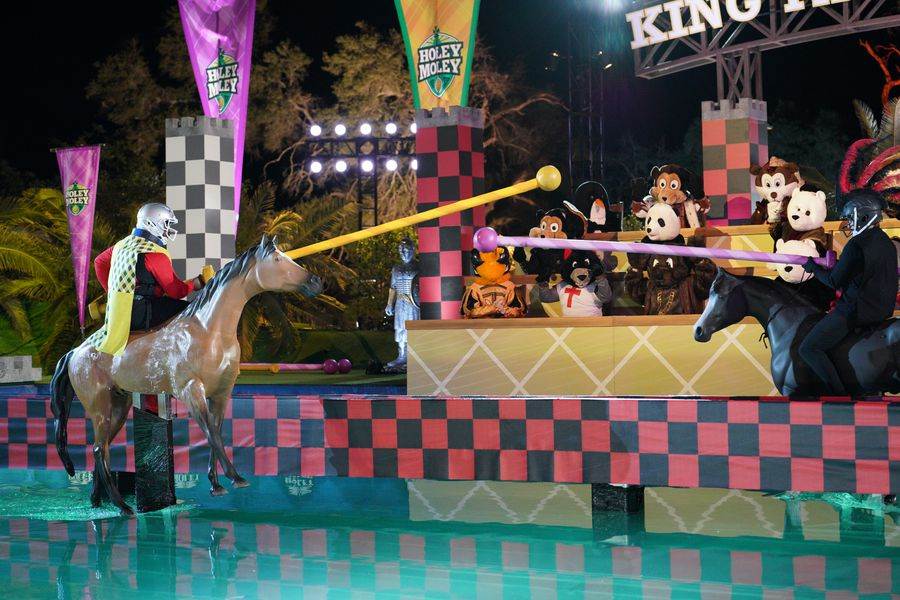 Now these are just some of the holes we’ve already seen this season, they’ve promised 12 new ones which means there are at least 6 returning favorites, and we haven’t even seen all 12 new ones yet! Fans of last season’s hole, Uranus, and all the puns that came with it will be sure to enjoy a new hole this season though I won’t be putting the title here. You can find that out for yourself when you watch Holey Moley 3D in 2D, Thursdays on ABC and the following day on Hulu!