“A Crush of Their Own” finds adult Max and young Leo developing crushes, the newest episode of Sydney to the Max. In both parallel stories, young Max and Sydney try to play matchmaker, learning that you “Can’t hurry love.” Here’s a recap of the 14th episode of season 3. 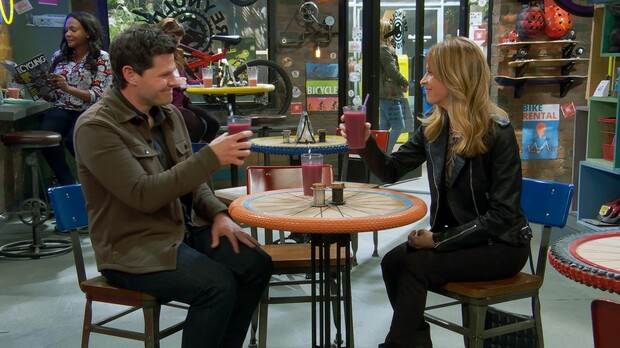 After her guitar lessons, Sydney comes downstairs with her teacher Gemma and Max meets her for the first time. She seems charmed by his goofy apron and he is impressed that she was in a rock band before she became a teacher. Sydney notices the connection and gives her dad a hard time when Gemma leaves, but agrees to help find out if Gemma is single during her next lesson.

Just before Sydney’s next lesson, Grandma Judy leaves the house dressed as an opossum, her school’s mascot, telling her granddaughter that it’s her last time in the suit. Sydney invited Olive over to help her find out if Gemma is single so it doesn’t look obvious and Olive pretends to have a boyfriend, asking Gemma for advice on what to get him. They find out that Gemma is single.

Grandma Judy gets home early because she tripped outside of a cafe on the way there and was caught by a mystery man. She has plans to go back in the costume to try and find him because she thought they had a connection. Max comes into the kitchen and Sydney tells him that Gemma is single, convincing him to ask her out. Max calls her and invites Gemma to coffee, but freaks out and adds “And Syd,” forcing his daughter to join him.

Max and Sydney have smoothies ready and waiting for Gemma when she arrives at Reynold’s Rides. Max is so nervous that he can’t think of anything to ask Gemma, so Sydney helps and soon learns that they both hate birds. Once the sparks start to fly, Max hints for Sydney to leave and Gemma tells Max that she was hoping he would ask her out.

A few dates later, Sydney and Olive are doing homework in her living room when Max comes in. Answering Olive’s question, he tells the girls they’ve had “Four-and-a-half” dates, showing them some pictures on his phone. He gets a text from Gemma asking if he’s free tonight and he hawks the girls to help him pick out what to wear.

Later that night, Max comes home looking defeated. Gemma’s ex-boyfriend moved back to Portland and she is getting back together with him, so they broke up. Sydney comes up with a plan to try to convince Gemma that Max is the perfect guy for her at their next lesson.

During the lesson, Sydney tells Gemma she wants to play her a song she recorded on her phone, “Accidentally” playing a voice message Max left her to cheer her up when she was sick. Getting up to grab her guitar, Sydney “Trips” over Max’s Heart of Portland award, which he received for his good deeds. The doorbell rings and Olive enters with a life size cardboard cutout of Max that has signatures all over it, saying it was from his birthday and all his friends signed it. The real Max enters, sees his cutout and asks what’s going on. Gemma realizes that Sydney was trying to get them back together and Max asks her to give them some space. He tells Sydney that he’s grateful to Gemma for showing him that he can have strong feelings for a woman again since the passing of Sydney’s mother.

Later, Grandma Judy returns, still wearing her opossum costume. She found the mystery man, but it turns out he wasn’t romantically interested in her. He owns an extermination company and wants her to be his mascot, a job offer she accepted.

Leo rushes over to Max’s house when he finds out that an ice cream truck broke down and all the treats are free. Max can’t go, though, because he’s waiting for his science tutor to arrive, a 9th grader who Judy hired to help him pass the class. When she arrives, Leo meets Danielle and finds out she built her own laptop and loves MC Gavel. Leo is smitten.

The next day, Leo shows up before Max’s next tutoring session dressed nice and planning to woo Daniella. When she arrives, he offers her homemade chocolate chip cookies and shows her the newspaper article about him being president of his school’s computer club, which he framed. When Leo hears that Daniella was only hired through the end of the week, he freaks out.

At the arcade, Leo is bummed about not being able to see Daniella again after next week, but Max comes up with a plan to fail his next test so he can keep her as a tutor. However, Max somehow passes the test and Leo has just one more chance with her. Max suggests that he tell her how he feels and Max gives them time alone. Danielle tells Leo that she’d like to be his friend when he gets to high school next year, but that she doesn’t want to be his girlfriend.

Sydney to the Max is taking a mid-season break. Disney Channel hasn’t revealed when the next new episode will air, but we will be sure to cover the news when they sharae it.