“A Whisper, Not a Shout” is the perfect title for episode 4 of The Mysterious Benedict Society. While Reynie, Sticky, Kate, and Constance (Mystic Inscho, Seth Carr, Emmy DeOliveira, Marta Kessler) settle on the idea of cheating in class to help the girls stay at the institute, they hatch another plan to gain some insight into what Mr. Curtain (Tony Hale) is doing. 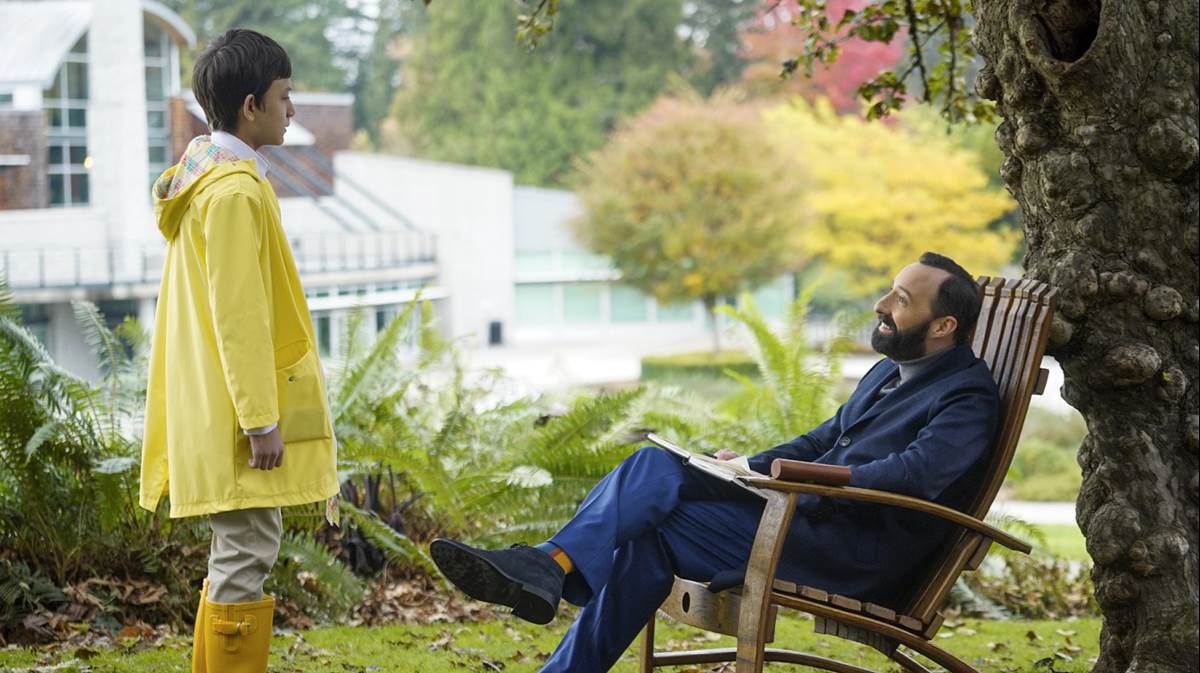 As Curtain sits out in the courtyard examining his journal, Reynie approaches him with a gift of bookmarks for his dogeared pages. While Reynie distracts him, Kate, Constance, and Sticky use a series of mirrors to spy on the headmaster’s deepest thoughts. Thanks to Sticky’s ability to remember everything he sees he can copy exactly what is on the page to study later.

Back at Mr. Benedict’s (Tony Hale) camp, distrust is in the air amongst the group. Rhonda (MaameYaa Boafo) has been sneaking out at night. Number Two (Kristen Schaal) decides to follow her to see what she has been up to. In town, Rhonda has been vandalizing signs with slogans that remind people to feel instead of being afraid. When confronted by Number Two, Rhonda’s reasoning is that these small acts keep her sane.

This notion carries over with Mr. Benedict as he and Milligan (Ryan Hurst) set out for a local mountain top that will give them a better view of a suspicious area of the island. Initially opposed by Number Two, Benedict and Milligan set out for their hike with hopes of success, and for Benedict the chance to see his brother in the flesh.

Cheating does not go well for the kids. Sticky is caught almost instantly and sent to the dreaded waiting room. Time moves rather slowly in the waiting room as Sticky imagines all sorts of illusions. When he is finally seen by Mr. Curtain, Sticky confesses his cheating but refuses to admit to who he was helping. This means more time in the waiting room. While Reynie and Kate are worried about the fate of Sticky, Constance has started to show her true self. She didn’t bother cheating on the latest test because this time she actually tried to succeed. As Mr. Benedict and Milligan make their way to the top of the mountain, Number Two and Rhonda reconcile their differences. We even get to see Number Two in her younger days as a pool player. The younger Number Two would often do things that seemed inconsequential but made her feel alive.

Sticky returns from the waiting room and describes how horrible it was to the group, but adamantly states that he didn’t betray their confidence. Amidst the joy of Sticky’s return, Constance informs the group that she has decoded Curtain’s journals, and the group learns that he has a plan called ‘The Improvement’ which is slated to begin soon.

The hike up the mountain was not in vain, as Mr. Benedict and Milligan see Curtain walk into their view and access a hidden layer within the rocks. For the first time in a long while Mr. Benedict see’s his brother, but he also has valuable information to share with the kids.

The episode concludes with Kate being barged for her low grades. A chance encounter with Martina Crowe (Saara Chaudry) saves the day. After defeating Martina at tetherball, where Martina is the captain of the team, Kate is spared being barged, and placed on the team at Martina’s request. In class, Mr. Curtain arrives with the biggest surprise of all as he happily announces the promotion of Reynie and Sticky to Messenger position.