Profits are down at Monsters, Inc and Mike is out to increase morale (and therefore, profits) starting with the replacement of a vending machine that Tylor broke in the MIFT office. 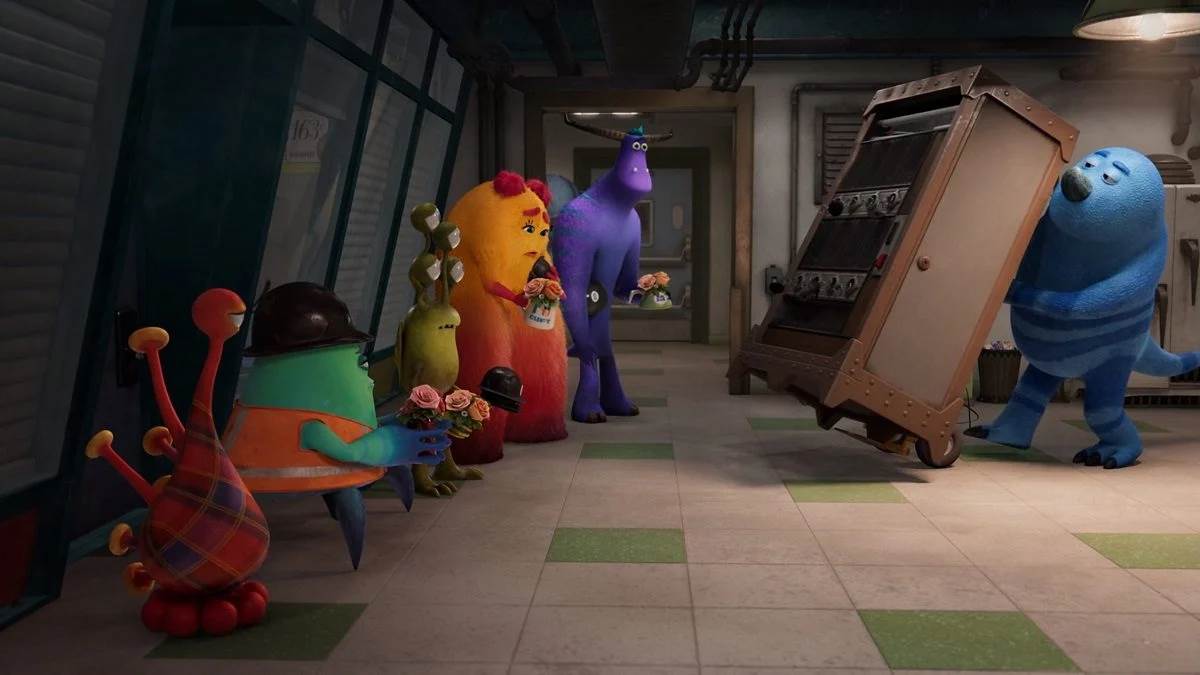 Tylor is trying to get something out of the MIFT Vending machine, an old classic that requires special tips and tricks to get something from when Tylor does what he’s best at…. Breaking things…and breaking “Vendi.”

Up in the CEO’s office, Mike and Sulley are in a meeting learning that profits are down, laugh canister output is down, and morale is down. The group needs to figure out where to make the cuts, with every department (including MIFT) having to trim people by the end of the week. Tylor and Val are up near the laugh floors to try and cheer Fritz up by getting him a Drooler Cooler. Mike is nearby and overhears, wondering what’s wrong with Fritz and they give him the idea to boost morale throughout Monsters Inc. by improving facilities and perks, starting with a new vending machine for Fritz.

Down in the MIFT office, the new  vending machine has been installed and Fritz falls in love with the multitude of flavors and options provided by “Vendi 2.” Elsewhere at Monsters, Inc. Smitty and Needleman and others are enjoying a new Foosball table and Mike explains to Sulley that this is their plan, by increasing morale, laugh canister output will be increased, therefore profits will go up.

Tylor is enjoying the new vending machine when he gets in another argument with Duncan, leading to a small physical confrontation near the vending machine that inevitably leads it to breaking. Duncan tries fixing it (instead of calling a certified technician) and removes a very important doohickey leading to the catastrophic turn of a vending machine which has now gone rogue, firing soda cans and treats at anybody nearby.

While all the chaos is happening in the MIFT office, in the Monsters Inc. lobby new fine art has been installed to inspire the employees and jokesters, including very expensive pieces by Vincent Van Gross and others. Mike has also started handing out mystery envelopes to employees as part of “Free Money Mondays,” pulling from Sulley’s emergency jar at home because after all, this is an emergency.

Downstairs, Duncan tries to save the day and take on the vending machine but gets pulled into the device, leaving it up to Tylor to come in and use his prowess for breaking things to break the vending machine and rescue his co-worker. While all the action happens off-screen, the plan works and Fritz uses the moment to explain that he had to cut someone, and like the original vending machine, he was old and broken and would be retiring since he couldn’t bear to see anyone else fired.

Upstairs, Mike and Sulley are being questioned about all the recent money decisions like the fine art when it is revealed that their plan worked. Morale has never been higher, laugh canister output has increased, and that only means that profits are sure to turn around in no time. Fritz gets the call saying that he no longer has to get rid of someone from the team, and all of our characters remain. Overnight, Tylor “fixed” the original Vendi vending machine, and the team once again has their old friend serving up their favorite classic Drooler Cooler, no need for all the flavors.

As usual, the episode ends with Mike’s Comedy Class, this time with a bit about clowns, featuring monsters in clown makeup. While I was expecting this to take a far more terrifying turn it did not, but it still proved that clowns are still better for generating scare energy as opposed to laugh power.