TV Recap: “Gabby Duran and the Unsittables” – “The Bubble” and “GOAT of the Month

Gabby Duran and the Unsittables returned with two new episodes this weekend, “The Bubble” and “GOAT of the Month.” Since there were two episodes, we’ll be covering both, but in quicker detail than our typical recaps. 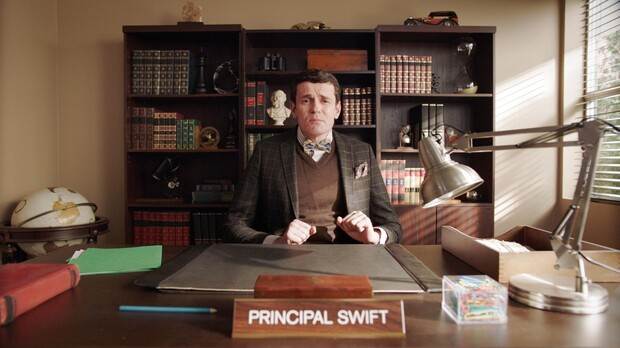 It’s “Fume Free Friday” at school, which means nobody is supposed to arrive in a car. But Gabby didn’t know about it and Dina drops her off in an old lowrider she borrowed for a news story, shocking the whole school. Wes tells her that because she’s so busy with her babysitting gigs, she misses out on a lot of news. He downloads an app on her phone called “Burst My Bubble” to keep her informed of everything going on in the world.

When Dina goes to Swift’s office to apologize, she finds out that he doesn’t actually like “Fume Free Friday” because years ago, he arrived to work on a bike with training wheels and got laughed at. Dina reveals herself to be “The Bike Whisperer” and makes plans to teach him.

Gabby finds herself becoming obsessed with all the disastrous news stories that night, so she races to Luchachos to tell Wes that they have to do something. In Swift’s basement, she gathers Wes, Jeremy, Olivia, and several of the kids she babysits to brainstorm ideas for using alien technology to fix Earth. Olivia reveals that she already donates time making sandwiches at the hospital that contain honeysuckle mayonnaise. Because one of the stories was about bees disappearing, Gabby wants to clone bees, but she goes overboard and creates “Electro-murder bees,” which attack ORB on their way out of the house. Gabby also realizes that they have a taste for honeysuckle mayonnaise and Olivia is now at the hospital volunteering.

Swift proves to be hard to train and while Dina remains calm, he’s just not getting it. She tells him to “Be one with the bike” so when he has a moment alone, he takes a bite of the bike seat and transforms into a bike. Dina gets an alert about bees attacking the hospital and she grabs a bike, which is actually Swift in disguise, to race there to make sure Olivia is safe.

As the bees attack hospital workers eating Olivia’s sandwiches, Gabby arrives with Wes and Jeremy, who has a vacuum that can suck up anything in the universe. Gabby coats herself in honeysuckle mayonnaise and leads the bees away from the crowd so Jeremy can suck them up. Dina arrives after the bee problem has been solved, dropping the bike (which is Swift in disguise), which gets taken by two kids.

Goat of the Month 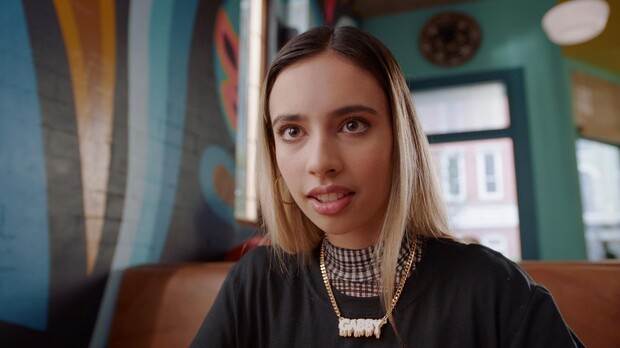 Gabby and Wes have waited 6 months to be crowned the “GOAT of the Month” in the school magazine, so when they hear that Susie is hosting an open mic night fundraiser, they see it as their chance. Gabby wants to sing a duet with Wes about friendship, but in rehearsal, she finds that Wes is a bad singer. While babysitting a new girl named Astra, who floats and makes potions, Gabby tells Astra she wishes Wes could sing just like her and Astra gives her a potion.

At Luchachos, Gabby tells Wes the potion is just a vocal spray and he tries it. He insists that she take some too and at their next practice, they find that their singing voices have swapped, Gabby sounding just like Wes and Wes sounding just like Gabby. She takes Wes to Astra’s and Wes finds out what Gabby did, becoming upset with her.

At open mic night, Wes sits alone watching when Gabby surprises him by getting up on stage. He hears how bad his singing voice is and decides to rescue her, getting on stage to sing it as a duet with Gabby’s voice. Afterwards, Gabby apologizes and Wes forgives her. A month later, the new school magazine comes out and “GOAT of the Month” is another student who did literal slam dunk poetry at the open mic night.

While all of this was going on, Swift told Jeremy that if he keeps “Blobbing out” when he gets mad, he won’t be a good ruler. Jeremy gets mad at Swift and invites Glor-Bron, Swifts nemesis, hoping to see his care provider lose his cool and blob out, too. But instead, Glo-Bron ends up teaching them both how to remain calm and not lose control. But when he leaves, that makes both Swift and Jeremy angry and they blob out anyway.

Next Friday, August 13th, is “Fun Lucky” on Disney Channel with the premiere of the new DCOM Spin, the animated special Descendants: The Royal Wedding, and the new series Disney’s Magic Bake-Off. Disney hasn’t announced the date of the next episode of Gabby Duran and the Unsittables yet, but it is called “Welcome to the Club” and features Gabby trying to join the school’s new Latinx Club, but finding out that she’s not Latina enough for the other students.