There’s a robbery afoot on this week’s Grown-ish, but not of material goods. Oh no, this is arguably worse. Zoey’s new internship is going swimmingly with famed streetwear designer Esme. They are starting to become a bit more casual in conversation, Esme is remembering Zoey’s name, and Zoey is receiving compliments on her sketches for new designs. When a conversation arises between the two of them about white designers appropriating black culture, Zoey makes a phenomenal point about the need for some sort of artistic reparations to exist. Esme takes the words to heart, apparently, as she’s later quoted saying the same idea to a major publication. Of course, Zoey is not mentioned once. Aaron and Zoey discuss the lack of citation from Esme, but Aaron tells her to take the moment in stride. Think of it as a compliment, at least she likes your voice and what you have to say!
Well, things take a turn when Zoey’s designs are then stolen by Esme and sold by her streetwear line. Down to the letterman jacket ‘Z’ on the front. Esme says it stands for Gen Z, but we all know it stands for Zoey. Understandably, Zoey begins to become infuriated. I mean, your own art is being stolen, sold, and profited off of with nothing coming back to you at all?
After chatting with Ana, Luca, and Nomi about the next steps, she decides to go and confront Esme. That decision is quickly aborted as she takes the time to look around the office at the photos hanging on the walls. Zoey knows how hard Esme must have worked to climb the ranks as a black woman to have a voice within a white-dominated industry. Yes, she stole her design, but the repercussions of a media scandal for Esme would be greater than that of a white male fashion mogul. Instead, Zoey decides to keep quiet. Until, ya know, Luca tweets about it. [Marie Kondo voice] I’m so excited because I love mess. 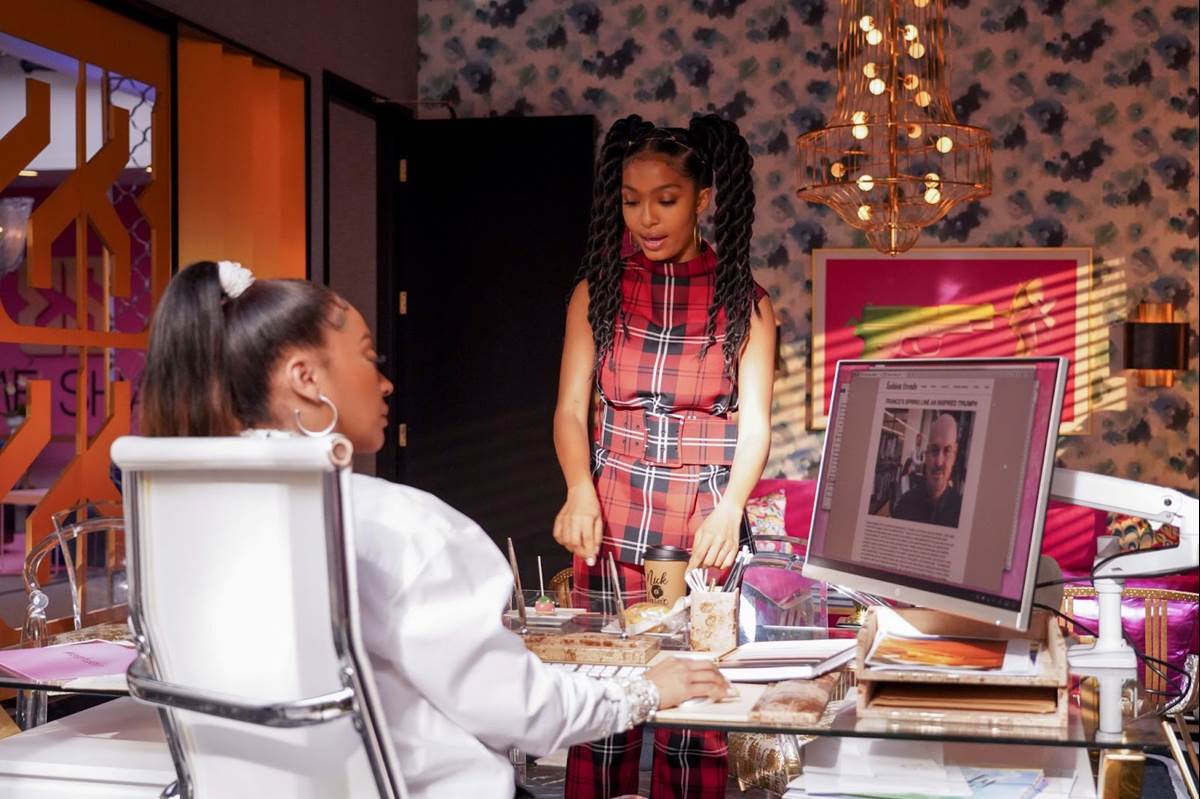 While all this is going on, Aaron is trying to cope with finally being able to teach college classes about Malcom X and other subjects where his passion lies. His actual student-teaching skills are pretty poor, however, and a sidetracked moment turns into him stripping in front of his pupils. It’s actually worse than it sounds, trust me. His punishment/compromise for the bad decision-making skills is to teach the infamous midnight class. The class where he found his crew and where we were first introduced to our beloved characters. All signs point to this being the last season (They are seniors, so it would make sense), so having Aaron experience this full circle moment did make me emotional. They grow up so fast!