Music, Friendship and Egos: Eve, Brandy and the Cast of ABC’s “Queens” Talk About the Show’s Unique Dynamics

Imagine this: Your favorite hip-hop girl group from the 1990’s reunite to produce new music together and you get to see all the behind the scenes baggage that comes with that. That’s the premise of ABC’s Queens, which stars several real music legends from the late ‘90’s and early 2000’s: Brandy, Eve and Naturi Naughton (of the girl group 3LW, the other members of which became part of Disney’s The Cheetah Girls). Joining them in the series and at the TCA Summer Press Tour were Nadine Velazquez, Pepi Sonuga and Taylor Sele, along with the producorial team. 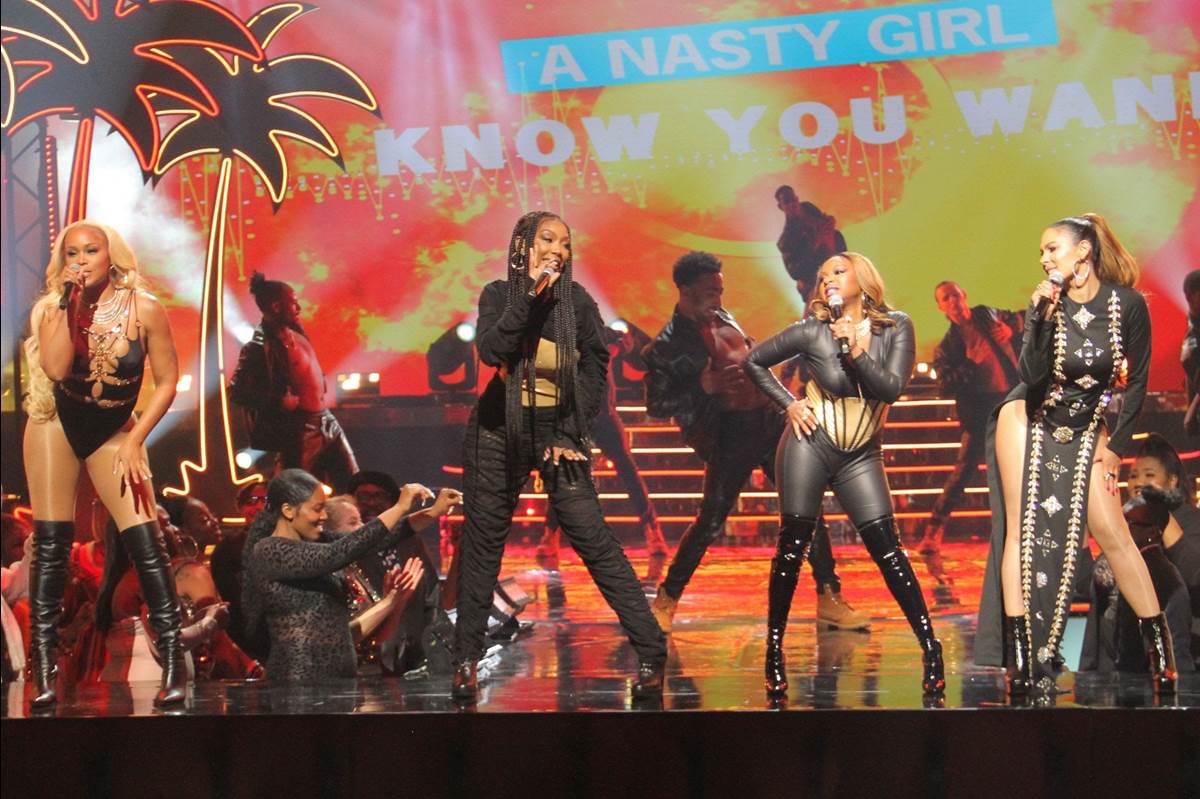 “It's so versatile, it's so different,” Brandy shared about her journey from Disney Princess in Rodgers & Hammerstein’s Cinderella to ABC queen. “I'm not a princess on this show, I'm really someone completely different.” Brandy plays Naomi, whose girl group name is Xplicit Lyrics (each of the girls have a different persona within the group a la TLC and Spice Girls). “I absolutely love rap,” the star explained about her character’s skills. “I've always loved it, I've been a hip-hop head since the '90s. And I'm just so happy to be able to rap and sing. It's definitely a difference, because this rapping is really, really difficult.”

“A lot of people underestimate how much it takes to rap,” Naturi Naughton agreed. “I'm more of a singer because, as a singer, it does take breath control and rhythm.” Naughton plays Jill, aka Da Thrill. “I just literally bow down to all the rappers who are dancing, performing, killing it… I'm having so much fun. I never knew I could really rhyme, and I'm feeling myself a little bit. The thrill is definitely spit and burn, so I'm having fun discovering the new cadence of what it takes to be an artist in that way.”

With Queens featuring new music from the cast, Eve’s involvement is a dream come true for her legion of fans who’ve been waiting for a new album since her last album in 2013. “The music from this is so incredible, honestly,” the rapper revealed. “If you're looking for new music, this music is going to feed you, trust me, from all of us… This is a great way to kind of dip my toes, my whole body, actually, not just my toes,  my whole body back into music without having the actual pressure of an album. I get to have fun and be this other character and also do incredible music. Trust me, when you hear it, you're going to love it.”

The lone member of the group within the show who hasn’t been a part of the professional music business is Nadine Velazquez, who plays Valeria, aka Butter Pecan. “I was ready to face the things that I've been keeping from the world,” the actress revealed about her entrance into music through the show. “I am musical in my soul, I am a poet in my soul, I am a dancer and she's in there. And this job is making her come out and I've been hiding her forever.” Nadine added that she has received an overwhelming amount of support from her Queens cast members and producers. “I've had a really traumatic experience in the entertainment business, because I was so afraid to show so much. But I get to be that here.”

That theme of support and leaning on one another extends to the plot of the show itself. “Our show is about sisterhood and family,” executive producer Zahir McGhee explained. “You fight with your family, and these are people that have been brought back together after a long period of time. And we have fights, but we want to see people supporting one another and coming back together. There's always going to be arguments, there's always going to be a hierarchy that exists, and shifting.”

“We have a lot of the real people who were there doing it at the time, which gives it a certain level of authenticity,” Zahir added about what makes Queens unique in a landscape of other TV shows that peel back the layers of the music industry. “We don't have a show where you can have five women of color and a man of color front and center. That is just not common on ABC and not common in broadcasting media. We have the opportunity to tell the breadth of stories about the experience of women of color and Black women in this country. [It] isn't the pressure of Eve having to be the one Black character to say the thing that matters, right? We are varied, we're great, we are beautiful. I think that the time was yesterday for this show, and the time is today, and the time is tomorrow for this show.”

Queens airs Thursdays at 10:00 pm ET on ABC beginning October 19th. New episodes will be streaming on Hulu the next day.