Martin Short comes back to television with his upcoming role in Only Murders in the Building co-starring Steve Martin and Selena Gomez. In celebration of his return, this week it’s time to go back to Short’s Touchstone Pictures comedy caper Three Fugitives. 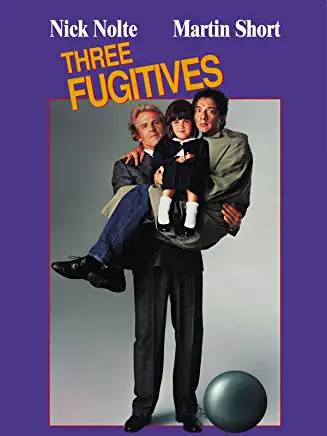 Daniel Lucas is a famous bank robber who has been released on parole with a plan to stay clean from crime. While depositing a paycheck from the prison on his first day out of lockup, the bank is robbed by a hapless felon named Ned Perry, and poor Lucas is taken hostage.

Det. Dugan believes that Lucas is up to his old tricks and pursues the two with the belief that he is the mastermind. Ned is outmatched by Lucas until he accidentally shoots him in the leg. Pursued by the cops, Lucas and Ned start to bond.

Ned describes his predicament. His wife died a couple of years ago, and now unemployed, Ned is desperate to care for his young daughter Meg. After helping evade the cops, Lucas frees himself of Ned, but his sympathy to the devoted but lacking father wins out.

Lucas devises a plan to help Ned free Meg from police custody and escape into Canada. About to leave his new friends behind, Lucas is dismayed to see Ned taken hostage by a bank robber moments after arriving in Canada.

Nick Nolte and Martin Short are a great team. While Short doesn’t get to use much screen time for slapstick zaniness, he does have some moments of hilarity. The confrontation with the police outside of the bank is genius. Nolte plays the straight man in this comedic moment, but it holds multiple levels of comedy for viewers to enjoy.

Nolte and Short make a likeable team. They play phenomenally well as opposites. From height to humor and everything else, it’s easy to see how mismatched the two are. Yet, they are a perfect match and make the audience want to cheer for their success.

The soundtrack to the film, especially the orchestral background music really doesn’t match the scenes. The overuse of the saxophone works well in some films of the 1980s, but throughout Three Fugitives there is just too much sax.

Martin Short has a mullet in this film. I don’t blame him, it’s just a reminder of things best left in the 1980s.

I remember going to see this film in the theatre when it was released. I think it was my mother’s idea. The movie is not targeting a kid audience. I guess my mom must have thought that since there was a kid in the film, I would enjoy it.

While I enjoyed traveling back to rewatch this film, there is nothing that stands out to make Three Fugitives a must see. It’s funny, thank you Martin Short. It’s serious, thank you Nick Nolte. And the dynamic that the two create onscreen is unique but is easily lost in the sea of content on Disney+.

For nostalgia, and some good laughs, I give Three Fugitives 2 ½ Golden Popcorn Buckets. You will enjoy the movie but it’s not something you need to drop everything to watch right now.

Now that school is back in session across the continent, we celebrate that return to education with Michelle Pfeiffer’s 1995 drama, Dangerous Minds.