TV Recap – “Marvel’s What If…?” Explores What Would Happen if Doctor Strange Went Down the Wrong Path

Through its first three episodes, Marvel’s What If…? has looked at some fun and interesting hypothetical scenarios and explored how the Marvel Cinematic Universe could be different. But what if one of those scenarios actually led to the destruction of the universe? The latest episode checks in with Doctor Strange and shows us what would happen if he lost his heart instead of his hands. 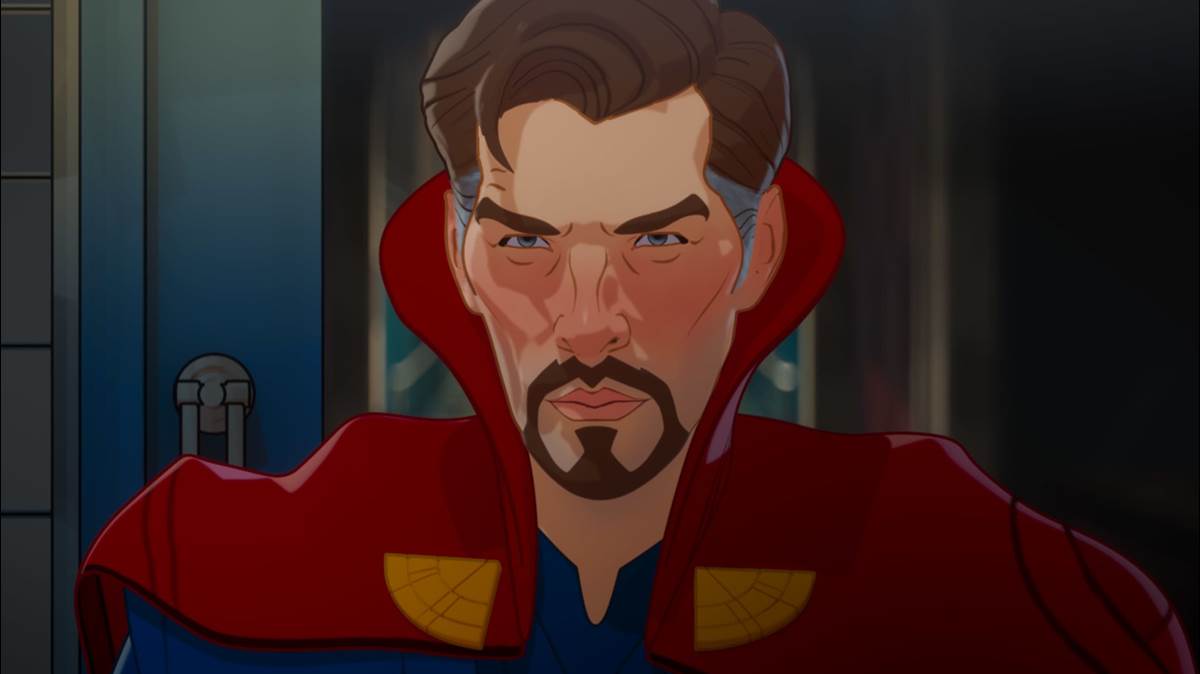 The episode opens with Strange picking up Dr. Christine Palmer to take her to an award banquet of some sort. As they’re driving, Strange attempts to pass a truck and narrowly avoids a catastrophic accident. Second later though, they’re hit by another car and they go flying off the road. The accident kills Palmer.

The Watcher explains that Strange lost his heart instead of his hands in this universe. We see a montage of Strange’s mystic training, leading to him still defeating Dormammu and becoming the Sorcerer Supreme. Still heartbroken though, Strange decides to use the Time Stone to try and undo Palmer’s death, ignoring Wong’s warnings.

We then see Strange and Palmer on the road again, having the same conversation we saw earlier. Strange decides no to try and pass the truck in an attempt to change the course of history. Seconds later, they’re still hit by the other car and Palmer is still killed.

Strange reverses time again and tries taking a different route, only to see the same result. We see a montage of Strange trying different options but no matter what he does, Palmer still dies. Eventually, the Ancient One shows up to explain to Strange that Palmer’s death is an absolute point in time and cannot be changed, because it leads to him becoming the Sorcerer Supreme and saving the universe. He refuses to believe he can’t undo her death and the Ancient One is forced to attack him. 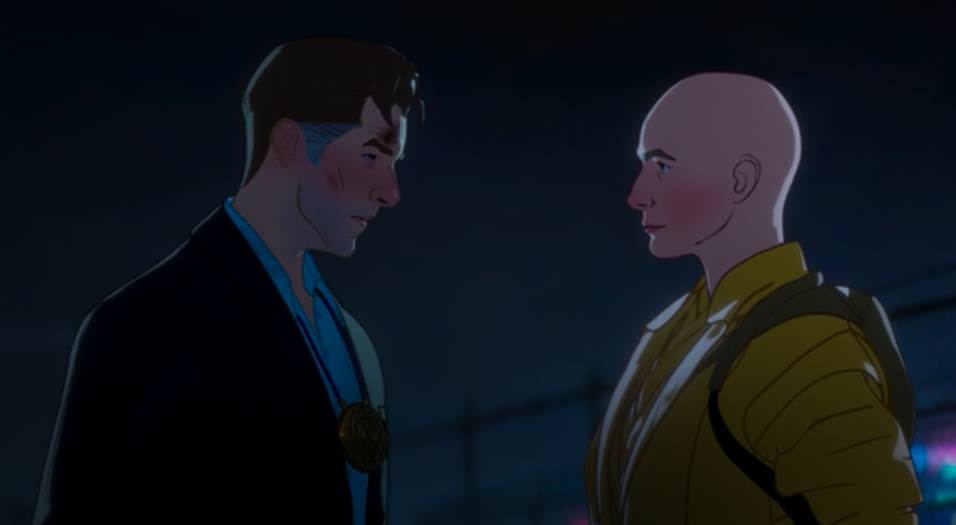 The Ancient One’s blast of magic seemingly transports Strange to a jungle, where he seeks out the library of Cagliostro. He follows a mysterious man to an ancient temple, where he falls victim to some security traps. The mysterious man identifies himself as O’Bengh, which in the comics potentially serves as Cagliostro’s real name.

Strange is led to the library, where he researches time manipulation and learns that he needs to absorb the power of other beings. He attempts to summon a monster and ask to borrow the power but is attacked and injured. When he wakes, he finds that O’Bengh has been treating him. O’Bengh also tells him that these mystical beings are not going to give up their power willingly. Once he’s healed, Strange decides to take the power by force and we see him summoning and absorbing a variety of nightmarish beings, transforming just a bit with each one.

The Watcher explains that Strange is on the wrong path and that he could warn him of that if he were allowed to intervene. Strange senses the presence of the Watcher and calls out to him but gets no response. This is the first time we’ve seen any character be aware of the Watcher, which is actually a normal occurrence in the comics.

Finally, Strange summons the first creature that attacked him and is now able to absorb it. He checks on O’Bengh, who is on his deathbed. Strange offers to help him by using the Time Stone, but O’Bengh refuses and instead informs Strange that there is another version of him out there, which the Watcher then confirms for the audience.

We jump back to when we saw Wong warn Strange about using the Time Stone to try and undo Palmer’s death. This time, he listens to Wong and puts the stone down. He walks outside to see that the world around him is deteriorating before the Ancient One arrives. She tells him she split their timeline in two, creating a second Strange. She fills him in on what the other Strange is doing and that he must be stopped or he will destroy the universe. 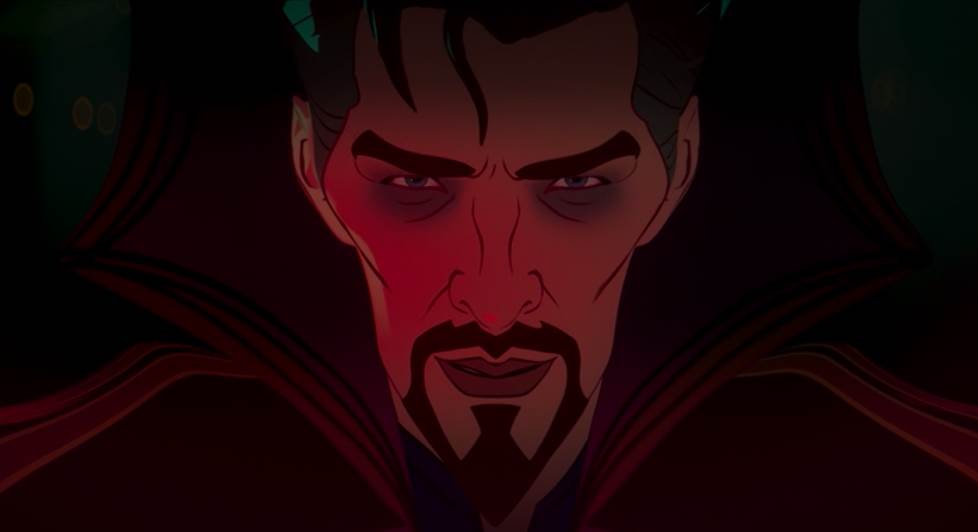 As Strange prepares for his impending battle, a portal opens beneath him and he falls through, landing in the temple with the other Strange. The evil Strange transports the both of them to the site of Palmer’s death. Good Strange tries to reason with him but it doesn’t take long for their fight to begin. Evil Strange fires orbs and beams of Kirby Krackle at his counterpart, a nice nod to the comics.

Eventually, the evil Strange gets the better of the good one and absorbs him. He then tries to use all of his power to undo time, leading to an enormous explosion and transforming him into a hideous monster. He is able to bring Palmer back to life but she is instantly terrified of him.

The universe continues to fall apart around them and Strange, now transformed back into his normal self, tries to use his power to keep everything from closing in on them. Strange again sees the Watcher and begs him to help his world. The Watcher explains that he cannot intervene, no matter how badly he would rather see Strange punished rather than his whole universe. Strange is unable to hold off the death of his universe and everything closes in around him and Palmer before she disappears. The episode comes to a close with the Watcher explaining that one choice can destroy the entire universe. 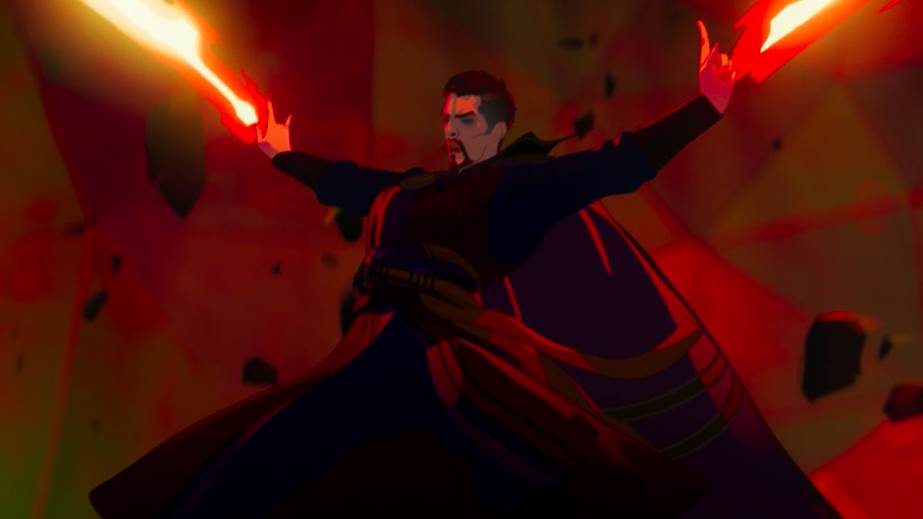 This is the best example we’ve seen so far of just how different this series can be on a week-to-week basis. Last week’s episode was certainly dark, but it didn’t end in the destruction of an entire universe. We can have fun stories like T’Challa in space or we can have what we saw this week. Marvel’s What If…? continues to surprise us and give us something new with each and every episode.