It’s no secret that George Lucas was inspired by Japanese culture when he created Star Wars. The Jedi are essentially space samurai and the Sith have parallels to ronin samurai acting outside the Bushido, which seems to have inspired the Force. From the films of Akira Kurosawa to the feudal warlord armor that inspired the design of Darth Vader’s suit, there’s no shortage of borrowing to be found in Star Wars, which is why it’s so fitting that Lucasfilm has partnered with Japanese artists not only on the upcoming Disney+ anime series Star Wars: Visions but also on a component of The High Republic with a series called Edge of Balance. In a story by Shima Shinya (Lost Lad London) and Justina Ireland (Star Wars: The High Republic: Out of the Shadows), Star Wars fans see just how far the Nihil’s reaches can go. Set on the lush outer rim planet of Bachii, this manga series follows Jedi Knight Lily Tora-Asi as she trains a padawan and helps colonize this new planet. It’s one of several that are new to the series in this introductory volume, along with a host of new characters and a few that will be familiar to fans who have been diligently following The High Republic thus far. This story is set during the second phase around the time of the Republic Fair on Valo.

Debris from the Hyperspace Disaster has reached the planet of Ta’Klah and the Jedi have arrived just in time to help its citizens evacuate. Lily Tora-Asi and Master Arkoff (a Wookie mentioned in Light of the Jedi) are among the Jedi helping to relocate people to Banchii, where Lily and her apprentice Keerin Fionn are tasked with helping them get settled. But when the Drengir (plant monsters that crave meat) make their first appearance on Banchii, it’s clear that the Nihil may be among the rescued citizens from Ta-Klah.

I sometimes feel fatigued by the introduction of new planets in Star Wars media, especially when they don’t make an appearance in the main saga and simply feel like another mono-biome planet. But Banchii is different and clearly rooted in Japanese culture. Living harmoniously with nature, the Jedi Temple on Banchii is carved from a giant tree, elements of its original form still visible in the living temple. There’s also a communal agricultural nature to the locale, seemingly one of the most peaceful places in the Star Wars universe.

Lily Tora-Asi also has Japanese elements to her character, including her dual lightsabers, the hilts of which look like katanas. Her short black hair is also a popular style for Japanese girls and her appearance in the artwork by Mizuki Sakaikibara (Tiger & Bunny) is in a classic manga style. Younglings featured in the story (a togruta named Viv’nia and a humanoid named Nima) have a kawaii style.

Volume one of Star Wars: The High Republic: Edge of Balance includes a bonus short story by Shima Shinya with art by Nezu Usugumo called “Tha Banchiians.” It gives readers a look at Banchii beyond what we see in the main story through a smaller assignment that Lily goes on with Keerin, Viv’nia, and Nima. It introduces the indigenous species of the planet and will be reminiscent to Star Wars fans of the Ewoks on the Endor Moon.

Star Wars: The High Republic: Edge of Balance, Vol. 1 is rated T for Teen, although the manga doesn’t feature any gore or sexual scenarios. More of a homegrown manga (there’s no publication date in Japan yet), it’s right along the lines of what you’d expect from a kid-friendly Star Wars project. If you’re looking at this for a kid old enough to read comics, you won’t find any scenarios here that are worse than what you would find in Star Wars: Rebels. 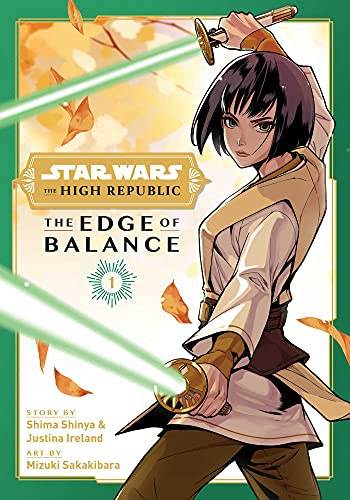