The 2018 real-life struggle to save the Taiwanese football team the Wild Boars from the Tham Luang cave in Thailand is brought to life on the screen in the edge of your seat thriller that is The Rescue. Directed by Jimmy Chin and Elizabeth Chai Vasarhelyi, famed directors of the 2018 Oscar winner Free Solo, viewers will experience a carousel of emotions as the film dives deep into the story while highlighting a variety of people involved in the successful rescue. 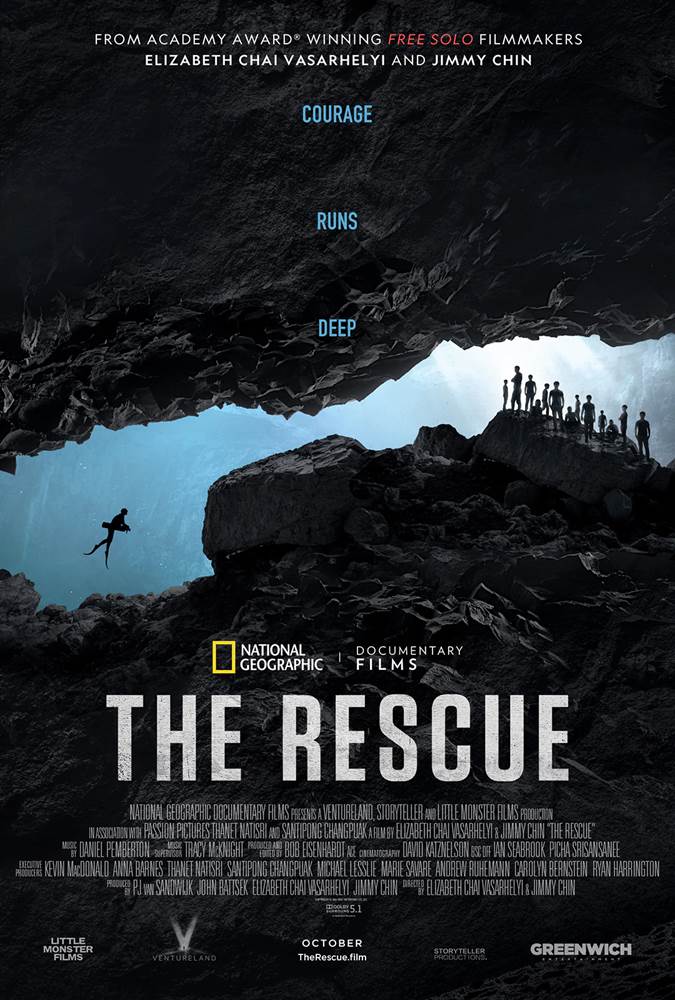 The Rescue has a difficult task in making a true story compelling. How do you make a story that the audience knows the ending to interesting? Directors Chin and Vasarhelyi succeed magnificently, by having people who were a part of the rescue tell their tale of involvement and what they experienced for over two weeks as the struggle to save the kids unfolded. We know the story, but not the people who were there and how this experience affected them.

From members of the Thai Navy Seals, the anguish of the parents who stood outside the cave entrance calling to their children telling them they will wait for them, the movie shifts attention to an unexpected group of heroes that helped lead the way for the rescue. When the group of middle-aged men from England show up to lend their expertise in cave diving, many in attendance, and some in the audience may doubt the value these men will bring.

The story follows this unorthodox group of recreational cave divers focusing on Rick Stanton and John Volanthen. They do not fit your typical description for experienced athletes. Most of the group of British cave divers are middle aged men who like to work alone and are not fans of team sports. The Thai Navy Seals struggle to accept that these men from England have better success than they do in the cave.

It is the cave divers from England, with John and Rick, that find the boys deep inside the mountain, and it is Rick and John who led the effort to extract the boys as safely as possible from the Tham Laung cave.

With the assistance of Dr. Richard Harris, a plan is devised to extract the boys, which has never been done before, and could easily kill the kids. Led by the cave divers, the boys will be sedated and brought out of the cave in scuba gear. The plan is risky, even Dr. Harris was against the idea at first. Fraught with a million ways for it to fail, the rescuers are out of time, and need to get the boys out of the cave. Slowly but safely the kids are brought out one at a time.

What always gets me with true life accounts is how well the tension is built up that holds the viewers attention. The Rescue succeeds in telling a well-known story and making you feel the angst of worry by telling the story from the perspective of the people who were there.

The emotion of the story is the hook, but the personalities of the people in this small group of elite speciality divers will keep you glued to the story. Stanton, Volanthen, and Harris are not who you would expect to lead such a tricky and dangerous mission, but they are the right people for the job. Sometimes the heroes we need are the ones we least expect. Navy Seals can do many things, but the middle-aged men from England and Australia who spend their weekends diving to the bottom of caves are just what the boys need to live to see another day.

The Rescue uses the personal narratives to drive the story, along with footage from the event, computer animation to provide depth and detail to the length of the dive, as well as recreations of the events to help propel the movie. Viewers will feel like they are at the outskirts of the cave watching this life and death struggle happen in real time.

With the joy of rescuing the boys, there is sadness. Samarn Kunan, a former member of the Thai Navy Seals, rejoined his unit to help in the effort but would die in the cave during the rescue effort. Dr. Richard Harris, celebrating the rescue of the last boy, calls home only to learn that his father has just died.

Heartache and sadness are a component of life. The celebration of humanity is what shines through in The Rescue. The men and women who came together, whether they were from the armed forces, the nearby villages, or from England, came together to bring the boys out of the cave safely, and they succeeded.

Blessed with skill and talent, The Rescue is doused with luck. On the last day when the last boys were brought out of the cave, the rains picked up, and the cave was inundated with excessive flooding. Only a couple of days after the operations ended, the cave was completely cut off and would not be accessible until October.

Humanity had a chance to do something good which brought those kids back safely. Directors Chin and Vasarhelyi, have once again brought to life the battle between humans and nature, and how the strength of the many achieved an impossible task.

The Rescue premieres on October 8th.