TV Recap – Killmonger Returns and Changes the Course of History in Latest Episode of “Marvel’s What If…?”

Marvel’s What If…? has been giving us altered stories set in the Marvel Cinematic Universe for weeks now, twisting events to send us down winding new paths. One major plus to the format of this series is the ability to bring back fan-favorite characters who have otherwise already been removed from the MCU. This week, that character was Killmonger and he helped bring the stories of Iron Man and Black Panther together.

The episode opens with the unforgettable Iron Man scene in which Tony Stark’s convoy is ambushed and he is eventually taken prisoner. However, this time, when Tony sees one of his own weapons land within feet of where he was hiding, Killmonger arrives and saves him just in time.

The Watcher explains that, because of this change in events, Tony Stark never becomes Iron Man. We see highlights from films like Avengers and Avengers: Endgame as he explains that none of this would have ever happened in this new timeline.

Tony holds a press conference where he names Killmonger his new Chief Security Officer. Rather than shutting down the weapons manufacturing from Stark Industries, he decides to double down and build bigger. When Christine Everhart asks about why Killmonger was even there to save Tony while his unit was stationed miles away, he admits he knew the attack was coming.

Killmonger reveals that he learned this information while he was on an undercover mission inside the Ten Rings. When Obadiah Stane tries to get Killmonger to stop talking, he reveals that Stane was behind the assassination attempt. As he tries to back away, Happy Hogan knocks Stane out with one punch.

At a party in Tony’s house, Tony offers Killmonger the job of COO, replacing Obadiah. Killmonger reluctantly accepts and the two celebrate. Pepper, skeptical of the newcomer, meets with James Rhodes, notably voiced by Don Cheadle here, to get some information on him. She tells Rhodes her job is to figure out what Killmonger is after.

Tony and Killmonger head to Tony’s office, where Killmonger reveals his desire to build a military drone and how he could never quite crack it. Tony decides to help him finish the project as payback for saving his life. The two get to work on building the new drones but when their prototype fails, they try brainstorming a new power source. Killmonger suggest vibranium and reveals that he has a ring made of the rare metal. 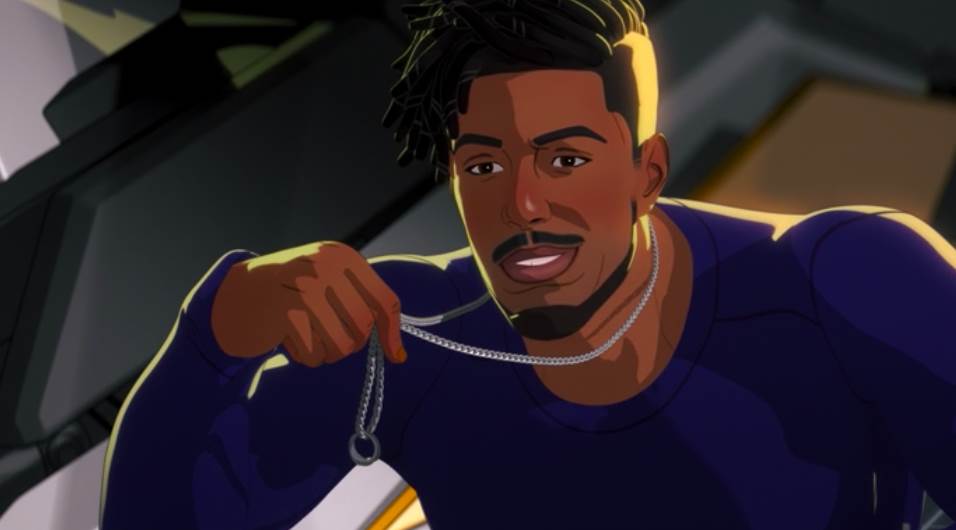 Tony now plans to get more vibranium from Ulysses Klaue, which Pepper urges him not to do. Killmonger suggest sending Rhodes, as the company’s military liaison, rather than going themselves, as a way to keep the company clean. Tony agrees and the plan moves forward against Pepper’s warnings.

Somewhere on the African coast, Rhodes meets with Klaue to buy the vibranium. While they’re making the deal though, the Black Panther starts taking out all of the guards. As T’Challa tries to convince Rhodes to let him take the vibranium, Killmonger interferes with a Stark weapon and uses it to kill T’Challa. He then takes one of the Black Panther claws to kill Rhodes as well. Klaue emerges from the shadows to reveal that the two of them had been planning this all along.

Killmonger returns to Tony’s office to find him upset with the loss of his friend. Tony reveals that JARVIS saw exactly what happened and locks the office down with both of them inside. He then activates the now functional drone to attack Killmonger. Unfortunately for Tony, Killmonger makes short work of the drone and then comes for him. He kills Tony with a Dora Milaje spear.

Killmonger stages everything to make it look like the Wakandans killed Tony and wipes JARVIS so there’s no evidence. General Ross orders that the new drones go into production so they can bring the war to Wakanda. Pepper remains skeptical of Killmonger and all but accuses him of all three murders.

Killmonger leads the drones to Wakanda with Klaue. When they reach the border of the country and the forcefield, Killmonger kills Klaue and brings his body to the Wakandans as a gift, just like he did Black Panther. This time though, T’Chaka is alive to reveal his lie to the rest of Wakanda and he welcomes Killmonger’s return.

The Wakandans prepare for war with the drones, with Killmonger offering information on how to defeat them. Little do they know, he’s playing both sides. He eventually convinces them to allow the drones inside their shield in order to cut their connection and render them useless.

The Wakandans take to the battlefield and play out the plan just as Killmonger laid out. With the drones inside and the shield reactivated, they shut down, as predicted. When T’Chaka tells Killmonger he has a home in Wakanda, Killmonger mutters to himself that he wants more than that and he reactivates the drones.

The Wakandans charge into battle and Killmonger joins the fight, with the war cry of “Wakanda forever.” He aids Okoye and the Dora and makes sure that Queen Ramonda sees him in action. When the battle is won, Killmonger finally watches the sunrise his father told him about. T’Chaka offers him the heart-shaped herb, making him the next Black Panther.

After taking the herb, Killmonger wakes up in Djalia, the ancestral plane, where he meets with T’Challa. The former Black Panther warns him that “power unearned can be a very volatile force” and that it will get the best of him eventually.

Ross informs Pepper that they plan to use Tony’s Jericho missiles to wipe out Wakanda. She then enters her office to find Shuri sitting at her desk. The princess of Wakanda shows Pepper proof that Killmonger murdered Tony and her brother and informs her that they have a common enemy. The episode comes to a close with the two planning to work together.

This was another very strong episode of Marvel’s What If…?, with the return of the popular Black Panther villain being more than enough to get fans interested. Watching his new plan unfold was just as exciting as the first time around. Aside from a few strange moments, like Killmonger’s awkward delivery of “Wakanda forever,” this was one of the best episodes in the series thus far.