The next chapter of NCIS begins Monday, September 20th on CBS with NCIS: Hawai’i, which breaks ground for having the first female team leader in the franchise, Jane Tennant. “Once we'd gotten to that idea, we very quickly had three subsequent ideas that have come to sort of define our pilot,” executive producer Jan Nash shared at the TCA Summer Press Tour. “A jet crashing into a mountain, which gave us a Navy crime, a bunch of nine-year-old girls on a soccer field being coached by Jane Tennant, our hero, wearing a pink camo sweatsuit, and then later in the episode, Jane Tennant jumping off a cliff into the ocean to catch the the bad guy, that will then help us solve our Navy crime.” That’s what fans of the franchise can expect from the explosive series premiere. 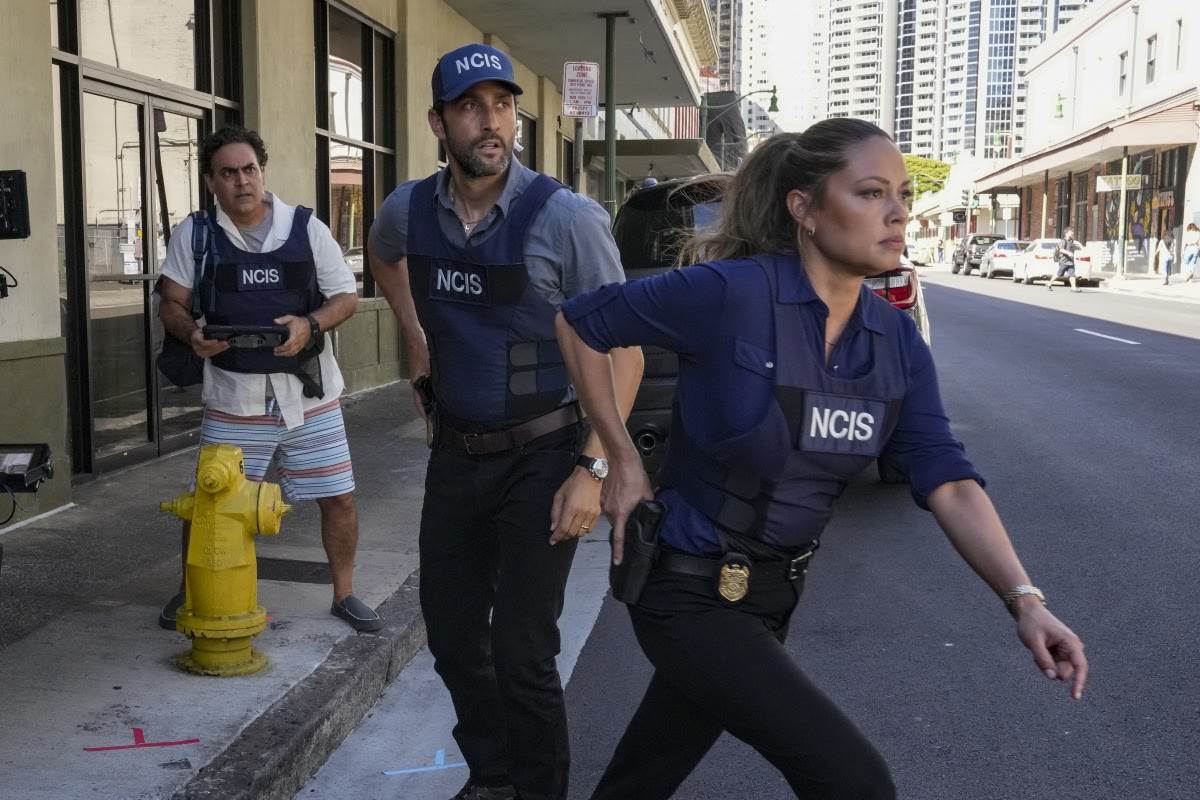 “It's an honor to be able to write the next chapter of this storied franchise, especially in a place like Hawai’i,” Matt Bosack explained, who also serves as an executive producer. “For a Japanese-American military brat like myself growing up, Hawai’i was also the first place where I felt like I actually fit in. These islands give us so much and now we all get to make an exciting television show there.” The production made headlines in June when they held a pule, a traditional blessing ceremony to thank the land, culture and people of Hawai’i.

“Looking for Jane Tennant, someone who was going to be this charismatic leader, became challenging,” executive producer  Christopher Silber revealed. “Luckily, Jane Tennant found us. Vanessa Lachey's audition, which was just amongst a bunch of auditions, stood out in a way that helped ease the neuroses and the anxieties of writers who were pretty sure that we had set up an impossible task. And she cleared that for us. Vanessa has all of the qualities of Jane Tennant, and now Jane Tennant has all of the qualities of Vanessa. She's charismatic, she's smart, she's charming, she's empathetic, and she's absolutely someone that I think all of us would follow off a cliff.”

“There are female NCIS stacks out there, they just aren't on TV,” Vanessa Lachey said. “To be the one to represent that, I'm honored, I'm humbled. It's something I don't take lightly, and I'm grateful for every day. But it's not just me, it is this team. They complete me. Not to sound like a cheesy TV line or movie line, but truly, together we are NCIS: Hawai’i.”

Speaking of the team, Matt Bosack offered up some information about each member. “Because we're set in Hawai’i, we knew very early on we wanted to have somebody opposite of Tennant, who is local to the islands, somebody who can go undercover, who has a unique point of view and experience, and that became Kai Homan (Alex Tarrant). We also wanted to have somebody who had that grizzled cop background, somebody who came from the mainland to play against the local boy type, and that became Jesse Boone (Noah Mills). We wanted to have a character who had this go-getter attitude, that could be fun, that was always willing to do what was needed, and that became Lucy (Yasmine Al-Bustami). Opposite of that is somebody who is a little bit more buttoned-up, comes from a different background and a different part of this world that exists at Pearl Harbor, because there are so many different branches, that became Kate Whistler (Tori Anderson). And of course, we needed that character who had the skills to be able to break into things, to hack into different databases, give our team the intel that they need, and that became Ernie Malik (Jason Antoon).”

“This cast has gelled immediately, right away from the first scenes that they were in together, as a team and as a family,” Christopher Silber added about the dynamic of the cast. “They just started from day one as a family and you can see it. You can see how they're talking to each other, we see it on the screen every day and that's magical. That's very fortunate.”

You can see the new ohana of NCIS: Hawai’i on CBS on Mondays at 10/9c beginning September 20th. The series will also be available to stream live and on demand on Paramount+.