Touchstone and Beyond: A History of Disney’s “Grosse Pointe Blank”

Our “Back to School” retrospective continues with the hitman/high school reunion comedy Grosse Pointe Blank. John Cusack proves that you can always go back to your high school reunion, and sometimes going home is the perspective change that you need to make a course correction in your life. 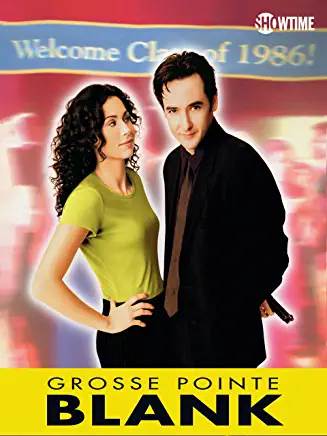 Martin Blank is in a rut. His life as a hitman is successful, but his ability to see joy in his work is diminishing. Pursued by another hitman named Grocer to form a union which would provide better wages and jobs, Blank shuns the offer and is encouraged to go home to his high school reunion by his secretary Marcella.

Blank is questioning his visit home, until he runs into his high school sweetheart Debi. Apologizing for standing her up at prom, the two reconnect. But the dangerous world of killing comes calling on Blank, and sooner than he knows it, Blank is fighting off assassins in his old high school and saving Debi’s dad from Grocer.

His love for Debi makes Martin reevaluate his life. It’s time to abandon the contract killing world and ride off into the sunset with Debi.

John Cusack is wickedly funny in this film. I found myself switching from laughing to cheering as he woos his high school sweetheart and then murders a guy with a pen. This satirical black comedy is something we don’t see often. Cusack looks like he is having the best time of his career and the joy that comes through his performance makes Grosse Pointe Blank an incredible film.

Dan Aykroyd is a joy as Grocer. His desire to form a union for assassins is funny, but his character is something I would expect if Ray Stantz was angrier and had an urge to kill. The dinner scene where Aykroyd and Cusack meet with guns concealed as the patrons surround them is not only hilarious for the dialogue but the physical comedy as they reposition their guns is slapstick physicality at its best.

Minnie Driver is perfectly cast as Debi. She’s no push over, and the moments she and Cusack share on screen make perfect chemistry for the romantic comedy ingredient to this film.

Grosse Pointe Blank is borderline violent, so if you are squeamish in any way, then skip the picture.

Grosse Pointe Blank is hilarious. This is a 4 Golden Popcorn Bucket film that will leave audiences entertained. The quality of the story and the talent of the actors will ensure that this film is regarded as a classic for decades to come.

Next week we conclude our “Back to School” retrospective with Mira Sorvino and Lisa Kudrow’s high school reunion comedy, Romy and Michelle’s High School Reunion.