Blu-Ray Review: Disney’s “Cruella” Includes Bonus Features About the Characters and World of the Blockbuster Film

Like a Panther De Ville screeching around a London street corner in the middle of the night, Disney’s Cruella is now available on DVD, Blu-Ray and 4K Ultra-HD. Starring Emma Thompson as the classic Disney Villain from 101 Dalmatians, the hit live-action film pits her against her first nemesis, The Baroness. Full of bold styles and set in 1970’s London, Cruella is as visually stunning as it is exciting. 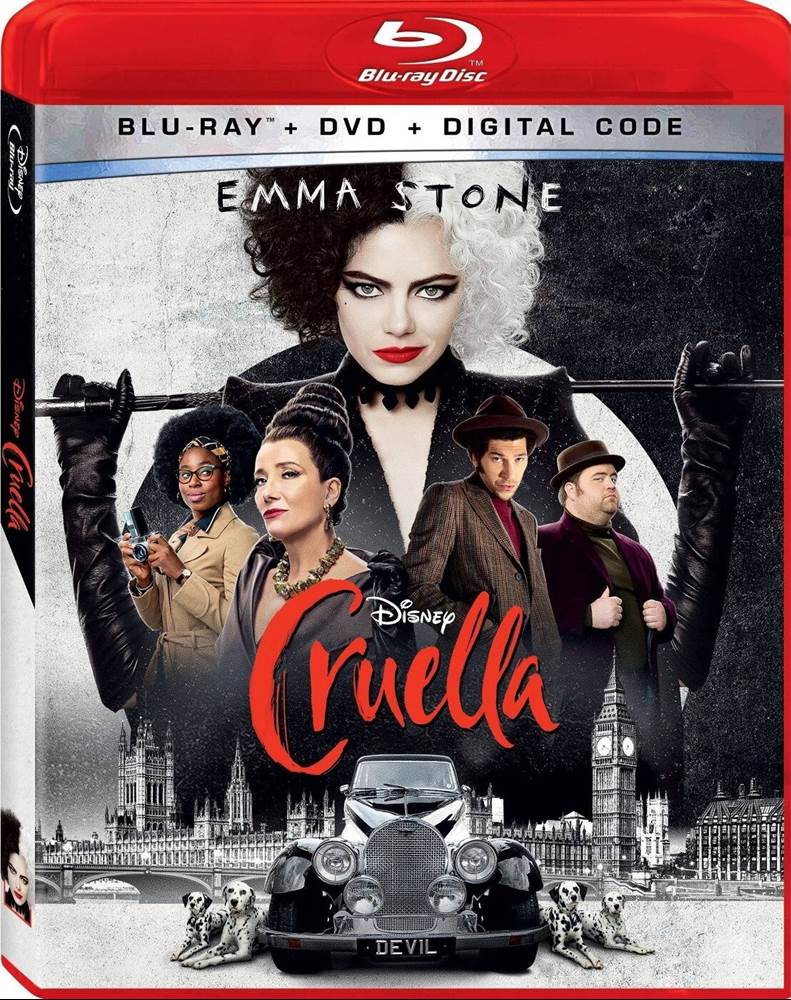 Born with a unique hair pattern and a wild side, orphaned Estella spent her childhood as part of a thief gang with her friends Horace and Jasper. Now a young woman with a flair for fashion, he true colors pour out when she meets her match, the wickedly stylish Baroness. With a backstory that inspired Estella to seek vengeance and don an alter ego, her true form of Cruella is about to be born.

With echoes of Batman and Joker embedded in the origin story, this adaptation of Cruella is darker than your typical Disney fare, while also being a lot of fun. Like The Devil Wears Prada, The Baroness and Cruella scenes are irresistible, with both actresses at the top of their game. There’s a reason why fans have become obsessed with the film.

Already available on Disney+ and digital, the physical media release adds about 40-minutes of bonus features to entice prospective buyers, which offer a glimpse behind the scenes. But for families with HD and 4K home theaters, the enhanced picture and sound are the real reasons to pop in a disc vs. press play on a streaming device.

The Blu-Ray release of Cruella comes inside a red Blu-Ray case instead of the standard blue. There’s no disc art, but the Blu-Ray disc has a black label instead of Disney’s usual blue. Disc holders on both sides of the interior hold the DVD on the left and Blu-Ray on the right. Inserts include a code for the digital copy (redeemable through Movies Anywhere), which also offers points on Disney Movie Insiders. There’s also a flyer for Disney Movie Club.

Both discs open with an ad for the Disney Bundle (Disney+, Hulu, ESPN+). The menu features Emma Stone as Cruella in the same pose from the cover while score from the film plays. The “Extras” menu is automatically open when the menu loads. There are no additional ads.

Cruella is a stellar film with an incredible cast, a lightning-in-a-bottle phenomenon. As far as Disney’s live-action catalogue of films based on animated projects goes, it’s one of the better ones. Whether or not you add it to your home video library or stick with the streaming options is a personal choice. The bonus features are fun, albeit scarce, but the upgrade in picture and video quality for home theaters can’t be matched.