TV Recap – Thor is the Life of the Party in the Latest Episode of “Marvel’s What If…?”

Marvel’s What If…? continues to deliver a completely different genre each and every week. This week, we got an action-comedy in which Thor is an only child and therefore hasn’t become the hero we know him to be. Instead, he brings a wild party to Earth and rages beyond control. 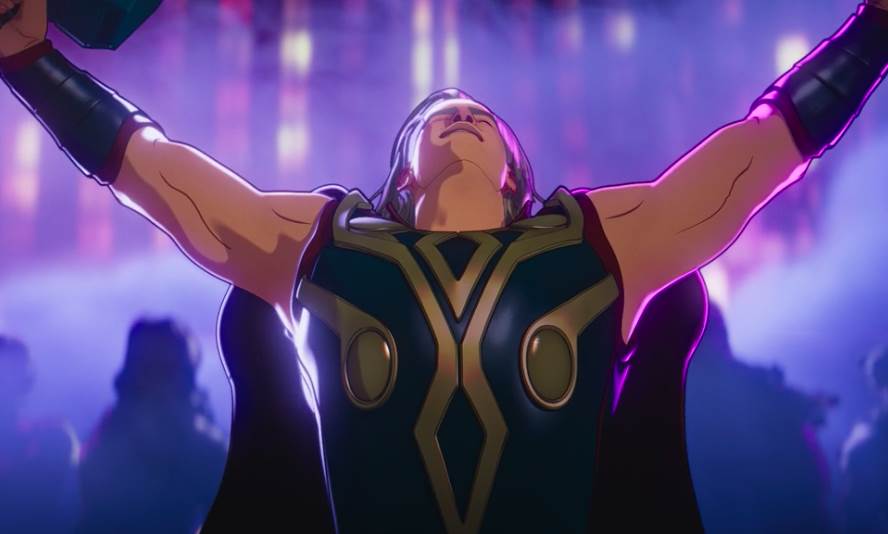 The episode opens with Jane Foster and Darcy in their van in a field, much like we saw in Thor. They spot a figure in the sky flying past them, which they believe is the start of an alien invasion. They’re partly right, as we see Thor and his friends land in Las Vegas and start a party.

The Watcher gives us an explanation of what this new universe has in store for us. Odin never adopted Loki here and instead Thor was an only child, never learning the lessons he did with Loki as his brother. Thor and Frigga watch as Odin slips into the Odin sleep. Frigga tells Thor she is off to her sister’s and he is to stay home and study and not throw any parties. She tells him Heimdall is watching.

Thor and his friends sneak away anyway and head to Earth to throw a party. In Las Vegas, we see dozens of ships beaming all kinds of alien creatures to the planet. Several Asgardians accompany Thor, including Lady Sif and the Warriors Three and Skurge.

Jane and Darcy arrive as we see even more familiar aliens in the city, like Skrulls and Howard the Duck. Thor and Jane meet and almost immediately fall in love, much like the movie. Meanwhile, the party rages on throughout Las Vegas, with the Grandmaster serving as DJ while Nebula and Korg gamble. Darcy also marries Howard the Duck while Thor and Jane get a pair of tattoos.

Jane wakes up in a trashed hotel room the next morning in a scene that looks like it was taken right out of The Hangover. Rumlow knocks on her door, forcing her to get out of bed. He announces himself as S.H.I.E.L.D. and she notices the mess in the room. She answers the door but doesn’t open it enough for Rumlow, or acting director Maria Hill, to see inside.

Hill explains that she is acting director because Nick Fury was injured by Korg during the party the night before. Jane tries to hide Thor, who can be heard voicing his amusement at the sight of Rocket Raccoon passed out in the sink. Hill is suspicious but recruits Jane to help get rid of Thor and end the party.

Onboard the helicarrier, Coulson points out that the party atmosphere Thor started is spreading and that Thor has left for Paris. Rumlow enters with a case, calling it “the last resort.” He opens the case to show the communicator Captain Marvel left Fury. She uses it to summon the solution to their problem.

Thor continues to party in Paris when he is interrupted by Loki, who now appears as a Frost Giant. The two share a tense moment before revealing that they are actually friends. Their moment is interrupted when Captain Marvel arrives and tells Thor to get off the planet. Instead, Thor calls her a party pooper and they start their fight. Thor eventually pins Carol down with Mjolnir and continues his party. 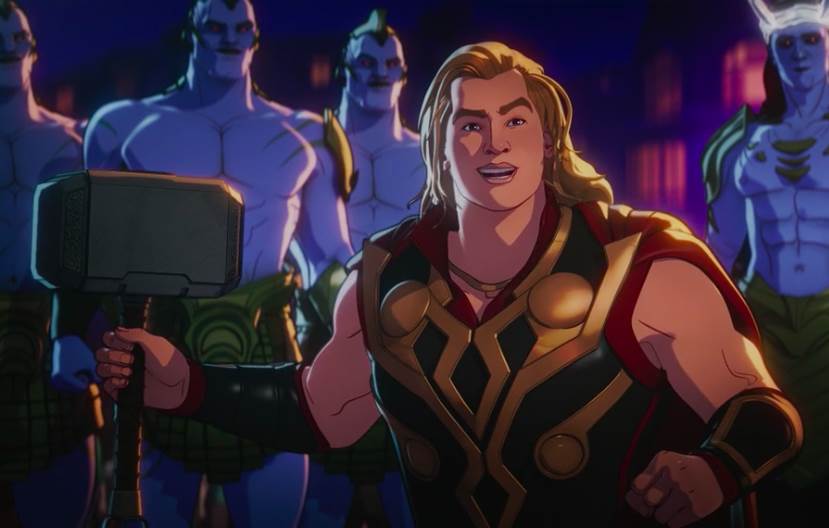 Hill is very displeased with the failure of Captain Marvel, who explains that is she exerted her full power she would leave a crater in the planet. Darcy tries to pitch using an unpopulated area to do just that. Thor calls Jane during their meeting and asks to see her again. Hill eventually agrees to Darcy’s idea, against Jane’s advice. Hill dumps Jane and Darcy back in the city and goes about the plan.

Jane tries to call Thor to warn him about the plan, but Loki answers. When Jane gets Loki to agree to pas the phone to Thor, he accidentally drops and breaks it. Darcy jokingly suggests they call Thor’s mom. To her surprise, Jane finds the idea brilliant and goes to work on calling Frigga.

The party rages on around the world, with Frost Giants defacing Mount Rushmore and Surtur cutting an arm off the Statue of Liberty. Thor and a large group continue to party in Sydney before being interrupted again by Captain Marvel. Meanwhile, Jane manages to get a signal out to Heimdall, who transports her right to Frigga.

Captain Marvel brings Thor to Siberia, where she intends to unleash her full power. However, Hill reveals that she also plans to nuke the area, in case Captain Marvel’s power doesn’t work out. Jane explains everything to Frigga, who gets a message to Thor just moments before he and Captain Marvel come to blows again, and before Hill can launch the nukes.

Thor convinces Frigga he has been studying on Earth and she says she has to see that for herself. Much to Thor’s dismay, she says she is cutting her trip short and coming to Earth herself. Hill makes the call that they no longer need to launch the nukes, which makes Rumlow unhappy.

Thor gets back to the party and begins begging his friends to help him clean up. They ignore him again and again until he puts on a powerful display to get their attention. When he tells them Frigga is coming, they suddenly understand the gravity of the situation and get to work on cleaning the planet. 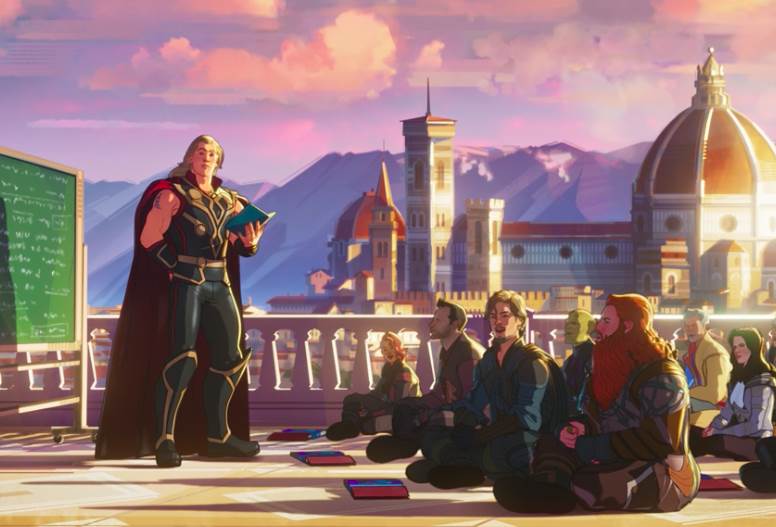 Frigga arrives to see Thor studying with a group of friends. Frigga appears skeptical of Thor until Captain Marvel arrives to bring him some information for his “studies.” That convinces Frigga, until Thor summons Mjolnir, which is covered with party decorations and… underwear.

Thor meets with Jane again and, after she instructs him to, he asks her out. Jane agrees, cutting off the stammering God of Thunder and the Watcher explains that they lived happily ever after. He is interrupted though, when a portal opens up and several Ultron bots walk out, revealing one to be armed with the Infinity Stones. His faceplate lifts to reveal that Vision is inside this leader Ultron and the episode comes to a close.

This was without a doubt one of the most entertaining episodes of Marvel’s What If…? to date. It was certainly silly, and even at times a little too much so, but for the most part is was a lot of fun. Marvel fans will enjoy the laughs and the number of characters who appear throughout. Interestingly though, this is yet another episode that ends on a cliffhanger, setting up another possible sequel sometime down the road.