Is Teddy Dimas the “Angel” that Tim Kono was working with? Is Teddy Dimas a murderer? What is the password to Tim Kono’s phone? Some, if not all of these questions are answered in “The Boy From 6B,” the 7th episode of Only Murders in the Building. Here’s a recap of this unique episode. 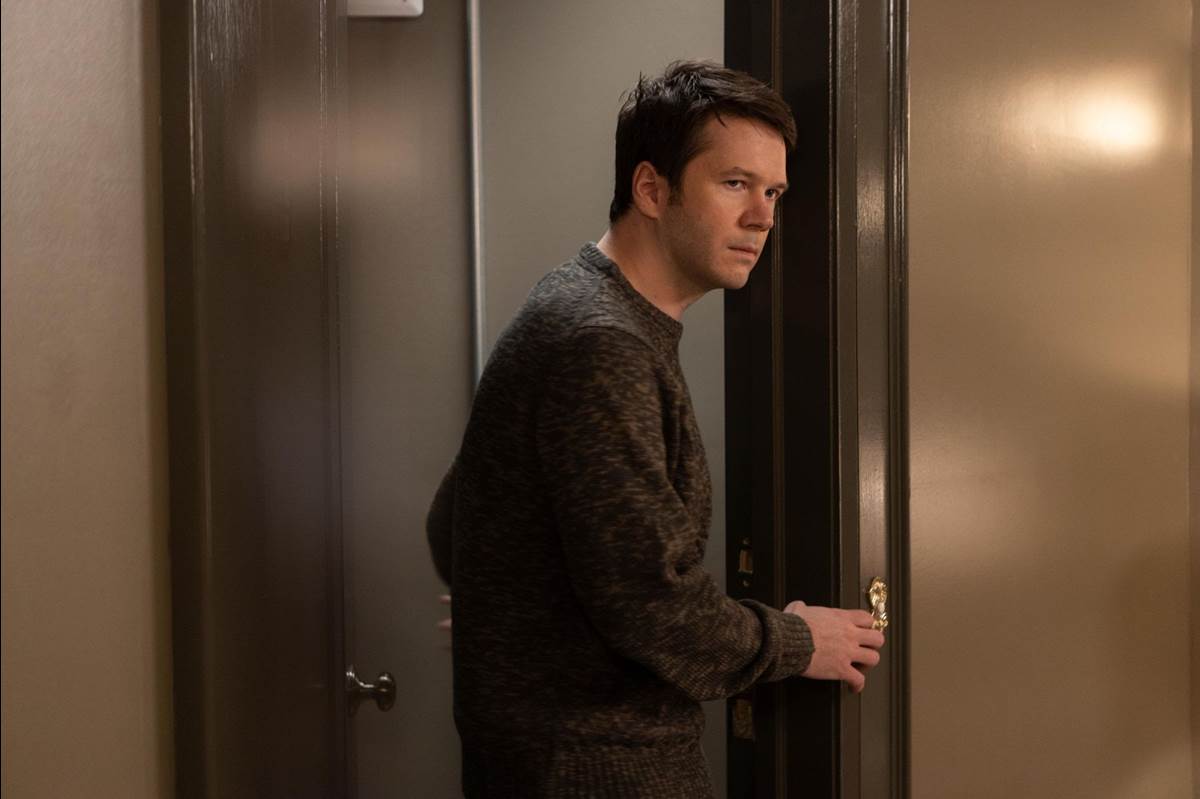 This episode comes from the perspective of Teddy Dimas’ deaf son Theo (James Caverly). With hardly any dialogue and subtitles over American Sign Language, we experience a childhood memory of a young Theo as his father (Nathan Lane) frustratingly tries to introduce him to one of his favorite musicals via a record, Rodger’s & Hammerstein’s Carousel. Placing headphones over his son’s ears, Teddy signs the lyrics to “Silliloqy,” getting upset with himself for getting so frustrated.

In the present, Theo looks out of the windows across the courtyard of The Arconia with binoculars, seeing Oliver (Martin Short), Charles (Steve Martin) and Mabel (Selena Gomez) together in Charles’ apartment. He can read lips and through subtitles we understand that they’re talking about breaking into an apartment. Oliver is going to take Teddy out of the building. When they exit, Theo gets a view of the suspect board and sees his father on it, but it’s an obstructed view. Theo goes to the hallway to watch his father and Oliver leave in the elevator, going for a 30-minute coffee together.

Theo goes down to the lobby to have a chat with the man at the desk, who just had an annoying conversation with the resident psychologist. He signs that he hates the people in the building and the employee agrees, taking a phone call while Theo steals a skeleton key. He sneaks off to Charles’ apartment, enters and takes photos of the board.

Meanwhile, Charles picks the lock to Teddy’s apartment and Mabel quietly motions for him to stay in the hall while she goes in with yellow kitchen gloves on. She has an instant flashback of Zoe in Teddy Dimas’ living room before she feels around for a lever on a bookcase, which opens to a hallway. Charles drops something in the hallway and Teddy’s neighbor Uma (Jackie Hoffman) pokes her head out to see what the noise was. Mabel motions for Charles to come see something and the secret hallway is lined with shelves of urns. He picks one up without gloves on and the bottom says “Shine On Funeral Home.” 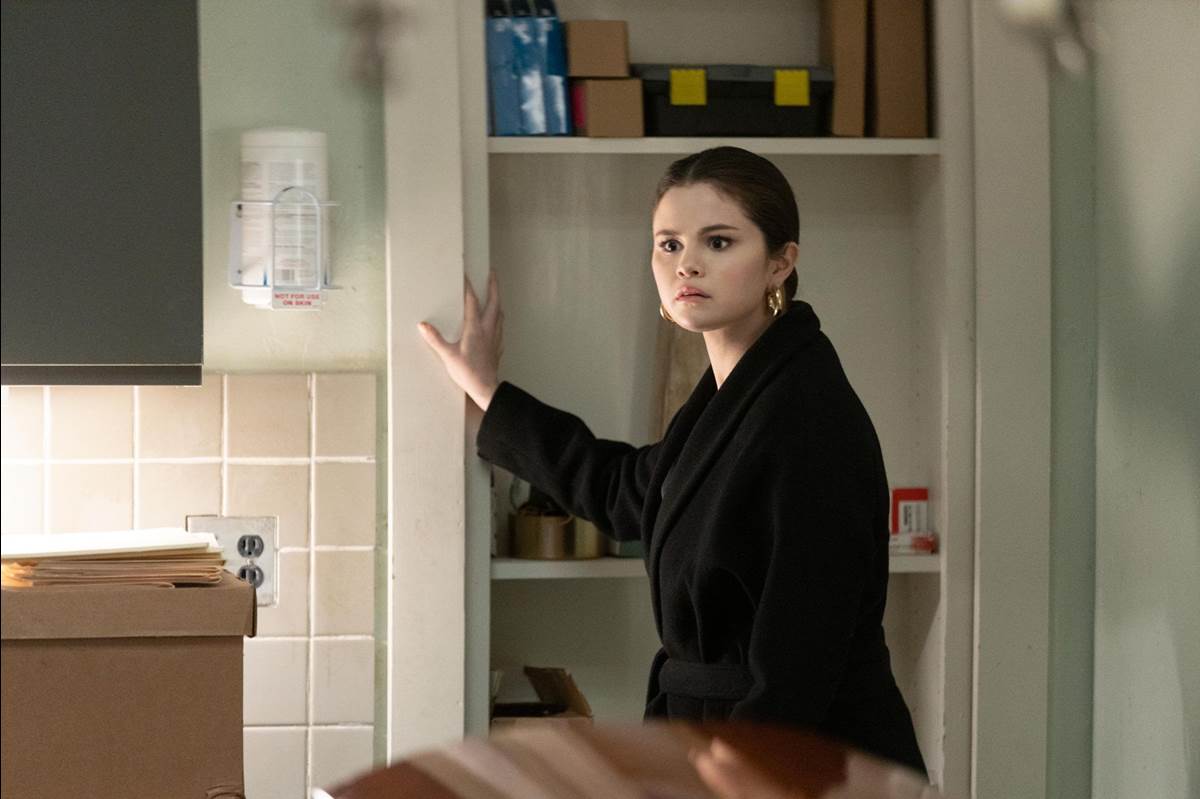 Theo enters his apartment just as Charles and Mabel were sneaking out, forcing them to hid behind a door to avoid being seen. When he moves to a different room, they quietly sneak out, entering an elevator just as Teddy Dima gets out of the other. Teddy enters his apartment and is surprised to see his son there. Theo signs to his father that the podcasters are on to them, showing his dad the photos from Charles’ suspect board. Teddy is upset that Theo went into Charles’ apartment, pointing to a photo of him with Sting as evidence that the podcasters aren’t close to solving the case. “We keep our friends close and our enemies closer,” Teddy signs, opening the secret door and emptying jewels from an envelope he was carrying into one of the urns. He signs to his son that there’s a shipment out tonight that his son needs to take care of.

In another flashback, we see teenage Theo in the secret room. He goes to exit, but notices that somebody else is in his apartment, seeing them through a small peephole. It’s teenage Mabel, Tim, Oscar and Zoe playing The Hardy Boys around The Arconia and this time they’re in Teddy Dimas’ apartment. Zoe mentions how cute she thinks Teddy’s deaf son is, with Theo able to read her lips as he watches. She picks up an envelope and a ring slides out, the same one Tim was looking for that Zoe was wearing the night she died. She looks at the peephole and Theo freaks out for a moment, but watches as Zoe stares while she puts the ring on.

Another flashback to New Year’s Eve. Theo and Teddy are in the elevator when they are joined by four teenagers: Zoe, Oscar, Tim and Mabel. Zoe ends up in the back next to Theo and teases the back of his neck with  her fingers as he smiles. The teens reach their floor and exit, with Zoe turning around and signing “Happy New Year.” Teddy is shocked that she knows ASL, but then notices her ring as the door closes. He gets angry at Theo.

Back in the present, Theo is leaving his apartment when he notices a yellow kitchen glove behind a door in his apartment, one of the ones Mabel was wearing when she and Charles snuck in. Theo gets in an elevator looking serious.

Mabel and Oliver go to Shine On Funeral Home where they see a rolling cart of urns loaded into an elevator. Sneaking down the stairs, they wait for the embalming room to be empty before they investigate. Mabel finds a hidden door that leads to a room of dusty shelves. Hearing a noise, Mabel and Oliver peak out to see that a body has been brought down, but there doesn’t seem to be anybody else around. They start to head for the stairs when a person in protective suit enters, their face obscured. Mebel ducks behind a counter while Oliver hides behind a curtain, the two texting each other as they watch the man pull a necklace off the body. The man sits down at a computer and removes his head gear, revealing himself to be Theo. He notices a reflection in the monitor and turns around as Mabel and Oliver run to a door in the basement that turns out to be locked. As Theo looks at Mabel, he recognizes her…

…Continuing Theo’s flashback of the New Year’s Ever that Zoe died, he’s on the roof looking for Zoe and finds her out on a balcony fighting with Oscar. Theo watches, reading her lips as she tells Oscar that she feels like she’s dating “The help,” upsetting him and causing him to storm off. Theo approaches her and she signs her name for  him, “The boy from 6B.” It turns out they’ve been secretly seeing each other and Theo is in love with Zoe. He tells her he needs the ring back because his dad is mad at him, but that he will get her a ring someday if she wants one from him. She laughs and says that it used to be that when a man tried to lock a woman down, she at least got to keep the ring. She gets furious at him, pulling the ring off, thrusting it into his chest and hitting and pushing him. Theo takes it, but eventually has enough and pushes her away from him. It seems that he didn’t realize how close they were to the railing and Zoe tumbles over it, falling to her death. Theo is horrified, looking to his left and seeing Tim Kono standing ther with his mouth agape…

…Theo races home and rushes in, Teddy asking what’s happening in ASL. Theo throws up and falls to the floor sobbing. In response to Teddy’s repeated questions, Theo holds out the ring. His father asks him three questions (“How bad is it?”, “Are you responsible?”, “Did Anyone See You?”). We don’t see Theo’s answer, but in the next scene, Teddy has Tim Kono cornered in a hallway, coercing him into telling the police that Theo had nothing to do with it. Adding a threat, Teddy tells Tim that he could meet the same fate as Zoe if he says anything, adding that the girl he’s always with would be hurt, too. Theo signs her name to his father: “M-A-B-E-L.” 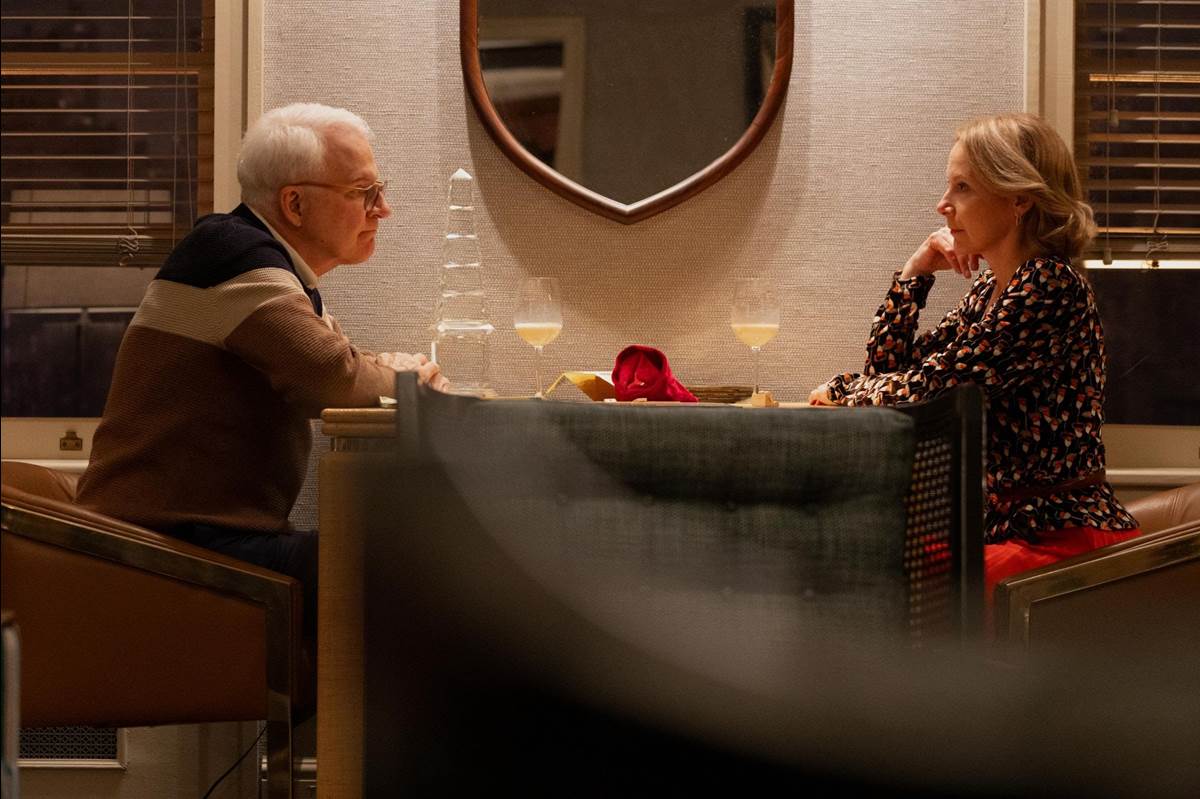 While Mabel and Oliver were casing the funeral home, Charles had a date with Jan (Amy Ryan) in his apartment. He puts on a record and the two dance to “Stairway to the Stars” by Ella Fitzgerald. Then they play a suggestive game of Scrabble that ends with Charles waking up next to Jan the next morning. Getting up, he checks his phone and has an alarming number of messages from Oliver and Mabel, but he skips to the end when they suggest a possible password for Tim’s phone: “Theo.”

Teddy receives a text from Theo: “They know. They’ve seen everything.”

Theo is driving a van in the night. In the back, we see Oliver and Mabel tied up.

Charles pulls out Tim’s phone and enters the suggested password. It unlocks and he lets out a triumphant laugh.

Only Murders in the Building will return on Tuesday, October 4th with episode 8, “Fan Fiction.”