Are Oliver and Mabel going to be okay? Did Teddy and Theo Dimas kill Tim Kono? We find out in the 8th episode of Only Murders in the Building, titled “Fan Fiction.” This is everything we just learned. 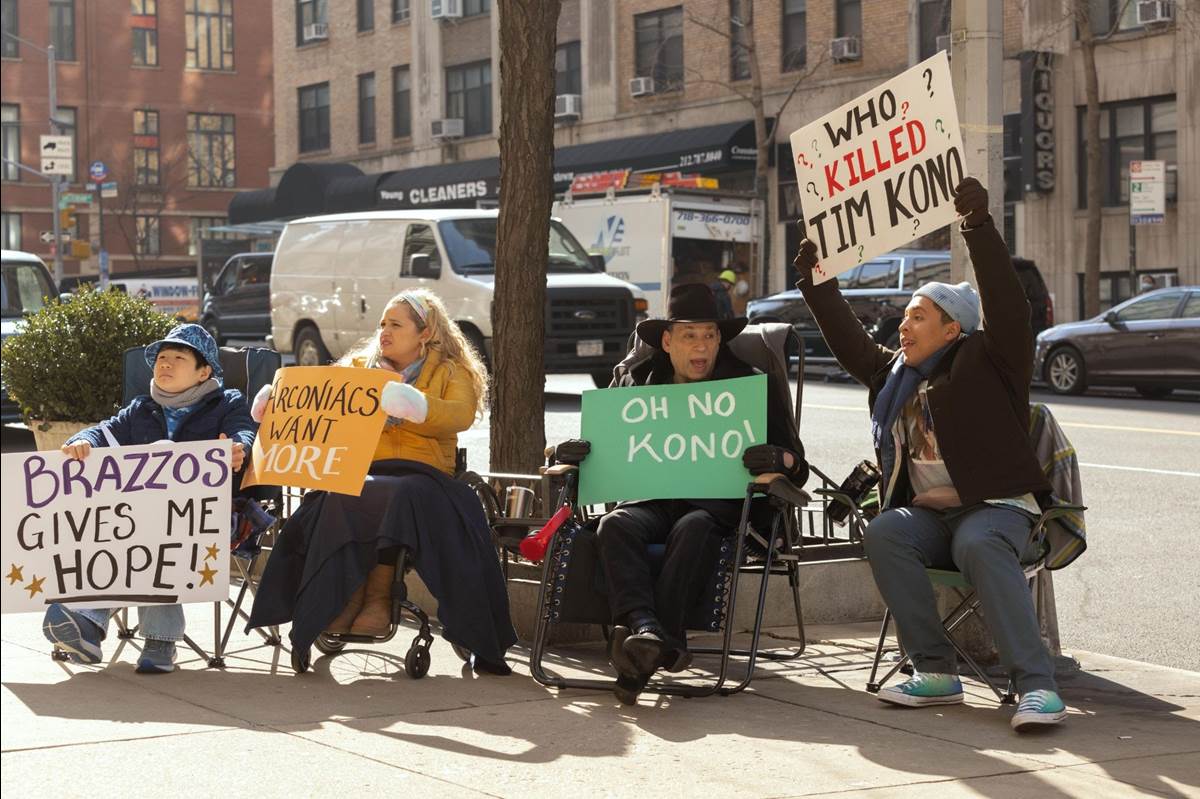 This episode is narrated by Sam (Jaboukie Young White), one of “The Arconiacs,” a group of diehard fans of the “Only Murders in the Building” podcast. He sits with four other fans, who pick apart the podcast while hoping to catch one of the residents or podcast hosts.

Oliver (Martin Short) and Mabel (Selena Gomez) wake up in the back of Theo’s van (James Caverly) and Teddy recognizes the smell of formaldehyde. They are let out at a city dump where Teddy Dimas (Nathan Lane) waits outside of a black SUV, offering them a ride home. In the car, Teddy sits behind Theo while he drives, telling Oliver and Mabel that he likes the seat he’s in because Theo can’t read his lips so he doesn’t have to know what he’s about to say. He talks about “The beauty of silence,” implying that he wants them to keep their mouth shut about what they’ve seen. “Your podcast needs to end,” he instructs. “You could end it with dignity or you can end it posthumously.” When Mabel brings up Tim Kono, he tells her he doesn’t know what happened to him. He gives them orders to record the final episode tonight and publish it by 7:00 am tomorrow, closing the case by saying that Tim Kono shot himself. “You’ll make the right choice because if you don’t, I know where you live.” He lets them out right in front of the group of fans, who hound the shaken co-hosts about when they can expect the next episode. Oliver is flattered that Sam is wearing a homemade shirt with his face on it.

Mabel and Oliver go straight to Charles’ apartment, finding Jan (Amy Ryan) there in a bathrobe without her date. She lets them in and tells them that Charles is out getting bagels, serving them coffee. Charles (Steve Martin) returns and is on cloud 9, so it takes him some time to process what Oliver says to him; That Teddy Dimas has threatened them with their lives if they don’t end the podcast. Charles, however, seems to think it’s no big deal and Jan pulls out a stack of files. After their coitus, the two lovebirds went through Tim’s phone together and Jan has organized his notes, receipts, and newspaper clippings. Tim had kept notes about how he saw Theo push Zoe off the roof and was investigating him. Mabel suggests they instead record a podcast to take down the Dimas’ and says they will need backup from the person who got her Tim’s phone.

Charles, Oliver and Mabel pull up near the docks in a taxi to meet Detective Williams (Da'Vine Joy Randolph), telling her their suspicions about Teddy Dimas. She explains that she is up against obstacles to reopen the case, so she will need a podcast revealing what was found on Tim’s phone to get public pressure on the department. She reveals that she is waiting on a toxicology report and fingerprints from Tim’s laptop, which could reveal who wrote his suicide note. She instructs them to get “The who, the how, the why, and the why now.”

In Oliver’s apartment, the trio stares at a board with those four categories when a knock at the door reveals Jan, who made homemade pizza rolls. Almost immediately there’s another knock and it’s Oscar (Aaron Dominguez), who shares that he met with Tim’s jewelry connection Cutter and learned that Tim had purchased the green ring that Zoe was wearing the night she died the day before his death. Mabel says she took all the jewelry in Tim’s apartment and it wasn’t there. Mabel thinks they’ve found the who, how, why and why now, but Jan says it seems circumstantial. Mabel and Oliver are both clearly annoyed with Jan’s presence. 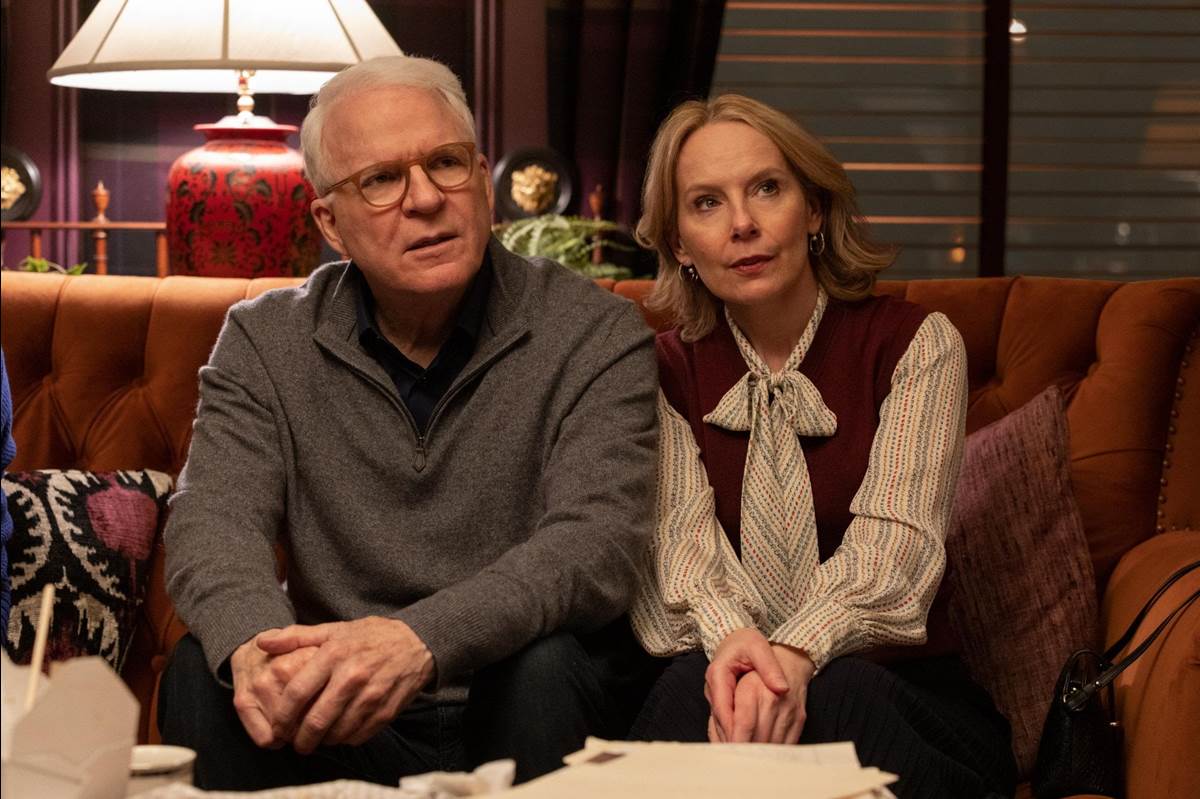 Oliver runs out to purchase some dip and on his way back inside, the fans stop him and start asking for intel on what’s coming in the next episode. One asks if they have more than one suspect and he asks why they would say that. They bring up the logistics of the crime and Oliver asks if they’re busy, bringing them up and introducing Sam, Paulette (Ali Stroker) and Marv (Daniel Oreskes) to the rest of the crew. They fawn over the three hosts and “Tie-Dye Guy,” but when Jan introduces herself, they are not excited. Mabel pulls Charles and Oliver to another room for a meeting, at which they both tell Charles that they don’t like Jan being here. Charles says it’s crazy that Oliver brought fans and he argues that they are just like the three of them before they started the show and they could use their help.

Back in Oliver’s sitting room, Sam explains that the trash bag Tim was carrying the night he died was from the 6th floor, but he lived on the 9th floor, a fact the hosts seemingly missed. Jan brings up the cat and Charles supports her theory, even though the hosts already pursued that lead to a dead end. Oliver suggests that the suicide notes they found in the trash bag may have instead been death threats and he uses Sam, Paulette and Marv as stand-ins for his visualization of what he thinks happened. 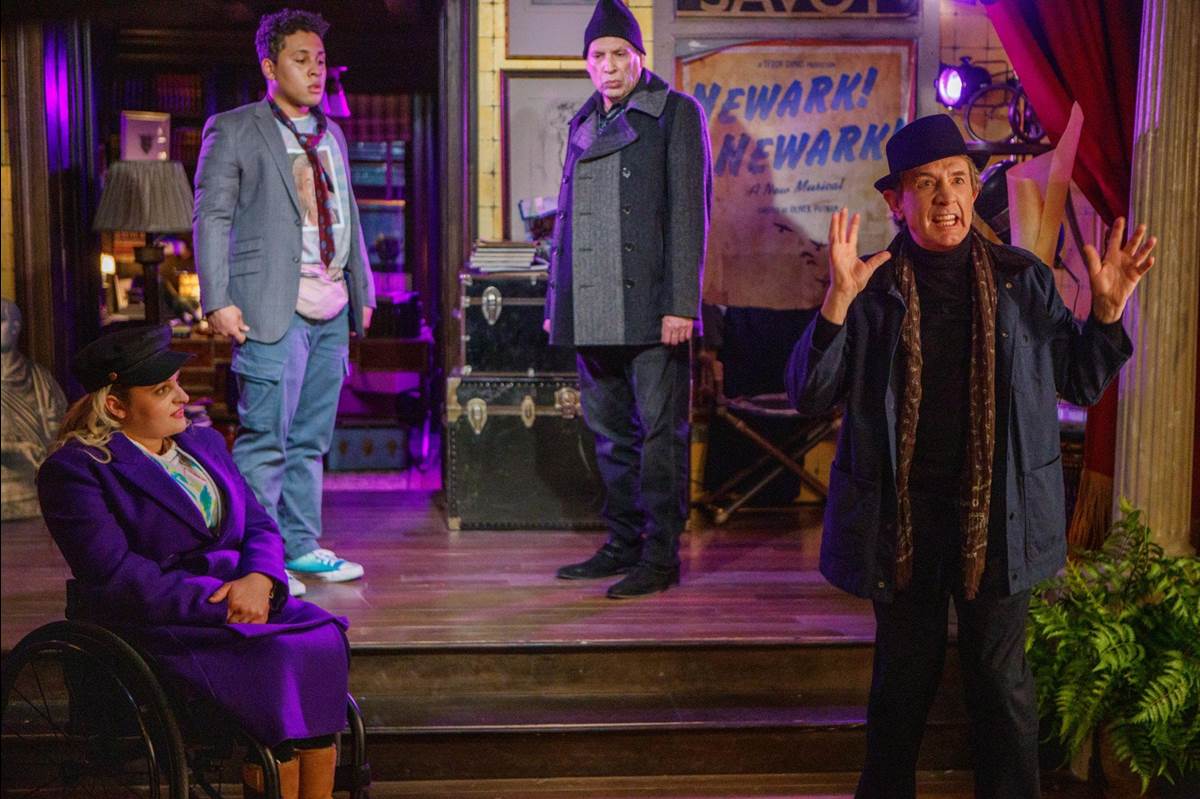 By 5:30 am and with the 7:00 deadline fast approaching, Oliver becomes increasingly rude to Jan, eventually kicking her out. We see Jan arrive at her floor, a note taped to her door. She opens it and it says “I’m watching you.” As she enters, she looks behind her nervously.

Charles delivers the final line of the podcast: “We’ll be back in the event of another murder in the building, or we move to a more dangerous area.” The fans leave and Mabel suggests they give somebody a sneak preview before it goes live. Cut to Detective Williams listening at her desk. 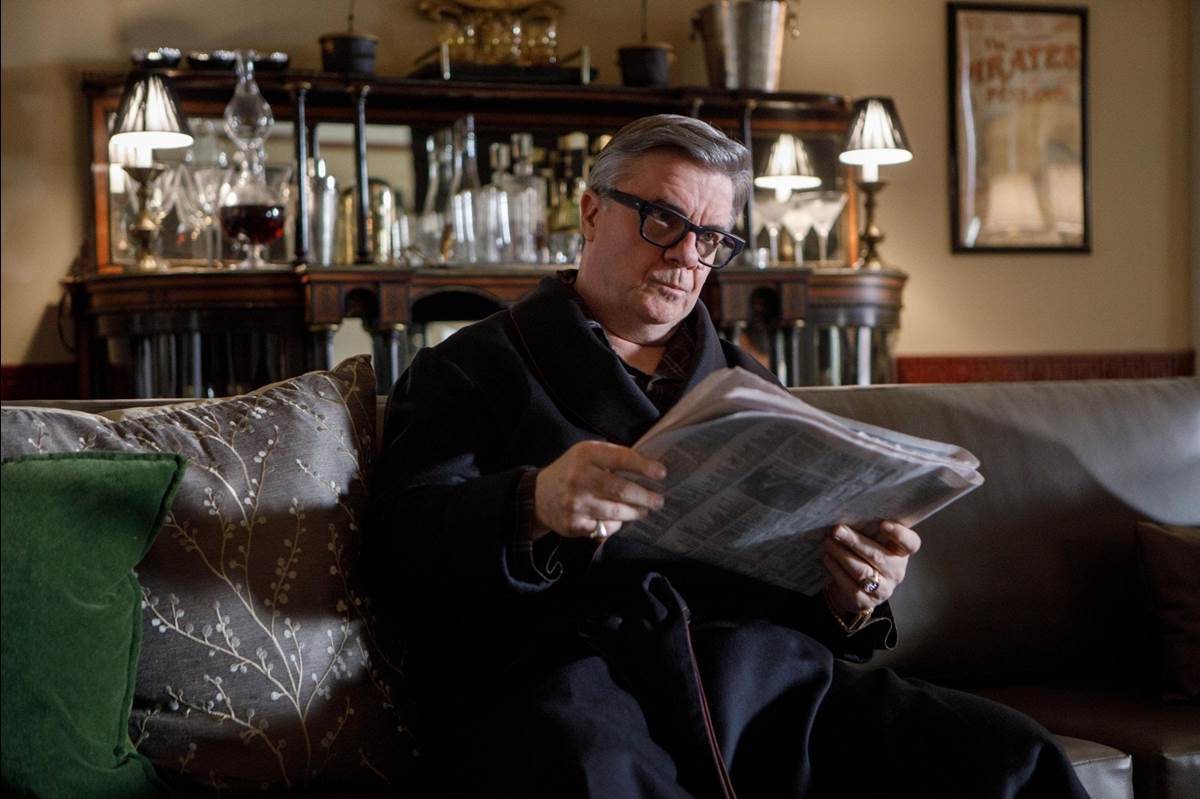 Teddy and Theo are on the couch when a push alert causes Theo to sigh and emit some profanities. He holds up his phone to show Theo the title of the new episode: “The Dimases Take a Dip.” A knock at the door reveals Detective Williams with two officers to apprehend the father and son. We then see other residents of The Arconia listening, including an employee named Lester (Teddy Coluca) while he delivers a resident’s dry cleaning, Bunny (Jayne Houdyshell), Uma (Jackie Hoffman) and Will (Ryan Broussard). The fans are camped outside listening as well. The youngest member of the group Grant (Orson Hong), who wasn’t with the group upstairs, asks an important question: Why would the sponsor pay for a podcast that could out him?

Charles, Oliver, Mabel and Oscar clink champagne glasses in celebration. Charles texts Jan an apology and doesn’t get a response. Mabel shows Oscar a video Tim made for him that was found on his phone, explaining that he’s sorry for what he did and that he’s looking for the ring.

Oliver gets a call from Detective Williams to congratulate him, saying that when the Dimases started trending, the chief sent down orders to apprehend them. But while on the phone, she starts freaking out as she receives the results of the toxicology report: Tim Kono was poisoned and was deceased before he was shot. Another file comes in, an image from a neighbor on floor 2 of The Arconia who has Nest footage of Teddy and Theo in the courtyard at the time the fire alarm was pulled, proving that they weren’t even in the building when Tim Kono was murdered. She’s angry.

Oliver calls Mabel and Charles back to his place. “I hate saying this, but there may still be a murderer in the building.” Charles is mad because Jan suggested that it wasn’t the Dimases and they tore her theory down. Cut to Charles arriving on Jan’s floor with a bouquet of flowers. He knocks on her door, which is ajar so it swings open. He calls for her as he pushed it open, Finding Jan laying face down on the floor, her bag nearby. It looks like there may be blood coming out of her right side. Charles calls for help.

What happens next? We will find out on October 12th in the 9th episode on Hulu, titled “Double Time.”