“The science is like Disneyland,” Paula Newsome shared about the new CBS spin-off CSI: Vegas. Newsome plays Maxine Roby, the team leader of a group that also includes some fan-favorite returning characters from the franchise. But another big difference arethe advances in DNA technology. “What it really does is, it weeds out a bunch of people. Not as much pointing to somebody, but weeds out.” The cast and creative team gave insight into the new series at the TCA Summer Press Tour. 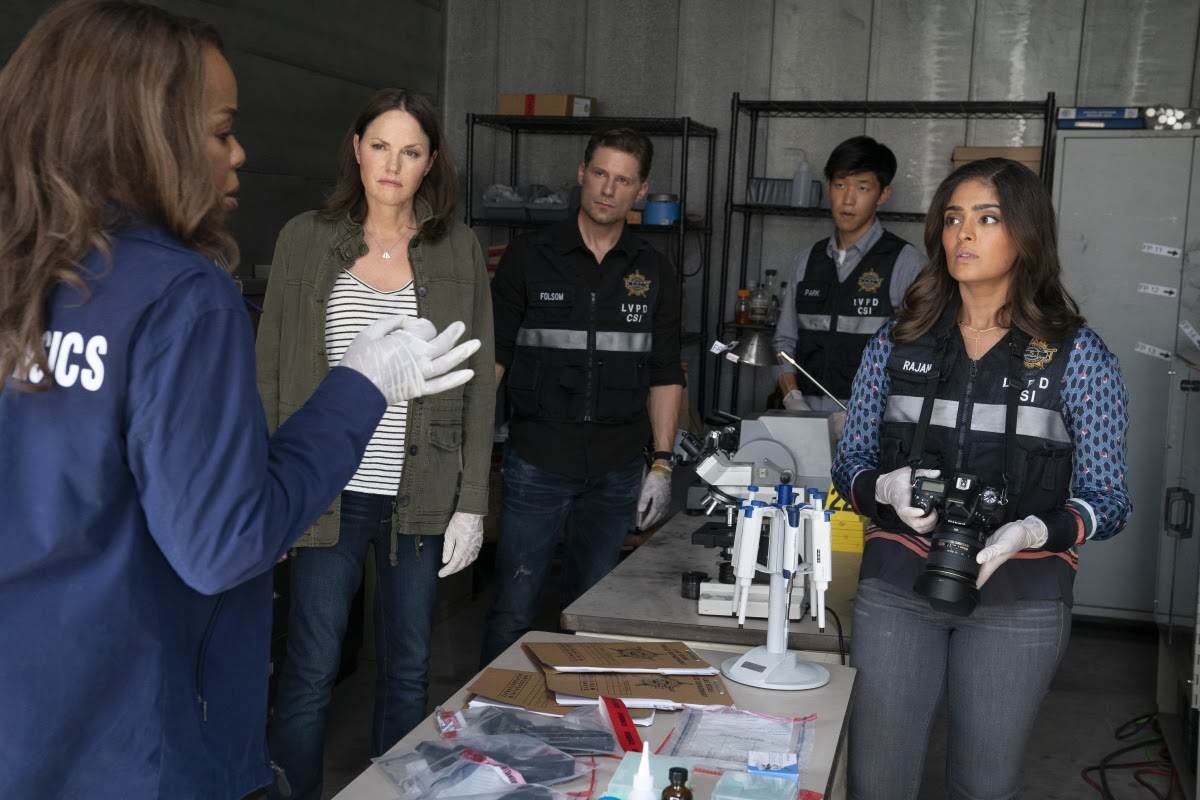 Under the direction of showrunner and executive producer Jason Tracey, the format will also shift from episodic cases to ones that span multiple episodes in an arc. “I inherited a fantastic franchise that sort of works like a Swiss watch, where you want to tell closed-ended case of the week stories and deliver justice inside the body of those 42 minutes that you've got,” he explained about the way things used to be done on CSI. “[CSI: Vegas] begins in dramatic fashion with an attack on Brass and on the lab itself, and it sets in motion something that Grissom and Sara primarily drive through the course of the season, but becomes something that involves all of our new characters as well.”

Original CSI creator Anthony Zuiker is on board as executive producer. “Anytime we can get any of our veterans back, it's such a great plus for all of our fans,” Zuiker said. “We have a couple more surprises in store, I could probably say that. But the fantastic blend of the original cast members with a brand new, diverse team in 2021 and beyond is such a great treat for the CSI fans and the franchise. And so great to have a brand-new voice going forward. And we feel like we're in a wonderful place to come back. We have a lot more legs to go.”

One of the returning characters is Sara Sidle, played by Jorja Fox. “The world, weirdly enough, is even more topsy-turvy than it was in 2000, so there's so much new happening, and yet it was great to sort of be grounded with William Petersen and come back as Sara,” the actress revealed about the experience. “Boy, what a thrill that is. And that sort of kept my feet on the ground a little bit.”

“It was a thrill,” William Peterson agreed, reprising his role as Gil Grissom. “It was unexpected to be asked to start a new version of this and I sort of jumped at it… To see who we are now, and from who we were to where we are now… It's a different world than it was 20 years ago. The idea of being able to come back into the land of science I thought was really a great opportunity. And it's different because it's 20 years later. And it's different because it's all new people, too. And that's all been great and exciting. And so, it's a real thrill to be able to do this with everybody again.”

Matt Lauria is one of the new cast members, portraying Joshua Folsom. “I loved hearing some of the stories that Jorja and Billy shared early on, and Anthony, about getting to ride along with real CSIs in Vegas and get down to the morgue and get into their offices and really get a much more hands-on approach,” the actor shared about an experience he couldn’t have due to the pandemic. “Fortunately we have had some experts working with us. Daniel Holstein is a CSI legend upon who Gil Grissom supposedly is based. We have had him on hand, and we've had a lot of help.” The creative team made every effort to prepare the new cast for the roles, including fingerprint-capturing lessons and equipment training.

“It's an enormous challenge and responsibility in 2021 to be telling stories set in the law-enforcement universe,” Jason Tracey explained about the current perception of police in communities. “Fortunately, this franchise that Anthony devised has always been about evidence and science and following the evidence wherever it may lead. We're not a show where characters are running around with guns and slapping handcuffs on people directly. It's a solving story and it's a science-based show. We take the responsibility of entering the criminal-justice realm really seriously, and we've tried to tell some thoughtful stories about getting justice for victims.”

You can catch the premiere of CSI: Vegas on CBS starting October 6th at 10/9c, with episodes streaming live and on-demand on Paramount+.