I said it would be tough to beat a Britney night, but that was before I knew this week’s theme! For the first time ever, we’re being treated to two Disney episodes in honor of Walt Disney World’s 50th Anniversary. From the opening dance sequence in Disneyland, to Tyra strutting to the “Circle of Life,” and the addition of a dance challenge twist from THE Mickey Mouse, it was a wonderful celebration of Disney's greatest heroes. 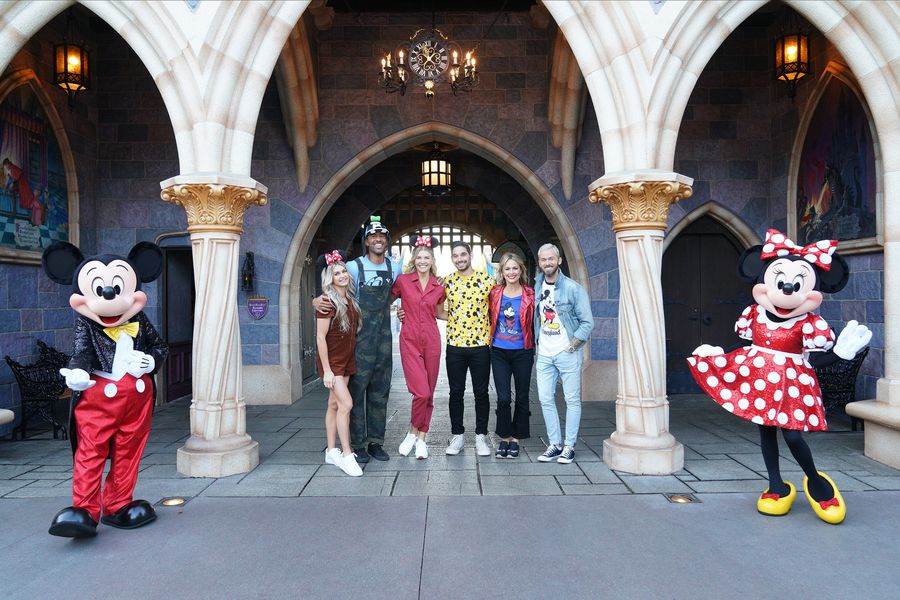 Note: With Mickey Mouse's appearance, he challenged the DWTS competitors to include his dance into their performances. At the end of the night, the Judges gave two extra points to the couple they believe best incorporated Mickey’s Dance Challenge into their choreography.

JoJo Siwa & Jenna – Viennese Waltz – My excitement for Disney night may only be possibly matched by Miss JoJo Siwa. Hearing that this couple would be queering the Cinderella canon brought joy to my heart! This is exactly why Jojo and Jenna are on DWTS – they’re making an impact! Tackling the role of Prince Charming, JoJo really rose to the occasion and made great adjustments to match a more masculine character. Like Derek and Len commented, their dance was a great example that sometimes simplicity can be magical, too. JoJo and Jenna totally deserved the first nines of the season! Judges Scores: 9 – 8 – 9 – 9

Melanie C & Gleb – Jazz – I’m always going to be partial to a nod to Mary Poppins and even more so when it’s highlighting an equally iconic Brit! First off, the grand roof set was everything I needed on this kind of night. Gleb shined throughout this performance which is great for the Chimney Sweep, but not so great when Mary has to keep up! It wasn’t the cleanest of Mel C, but she definitely delivered an energetic performance. Rightfully so, Derek name dropped Dick Van Dyke as soon as he could, while the rest of the judges pointed out the steps weren’t so in time. Judges Scores: 7 – 8 – 8 – 8

Matt James & Lindsay – Quick Step – Matt James as Frozone. Lindsay as Edna Mode. A quick step to the Incredibles theme song. This is a level of camp we do not deserve. While Matt definitely fit the part and Lindsay’s Edna turned out in one of her best looks yet, I couldn’t help but notice Matt seemed a bit stiff. Carrie Ann noted that he successfully made us smile in a unitard, which is what this competition is all about… isn’t it? Judges Scores: 6 – 6 – 7 – 7

Jimmie Allen & Emma – Pasa Doble – Inspired by the heroes of Mulan, Jimmie beautifully dedicated this dance to his late father. Each week I am so pleasantly surprised how much I adore Jimmie and his work! He brought a great strength to the performance and both he and Emma beautifully incorporated the martial arts movement to the pasa doble. As one of the best Disney songs in history, I also loved Jimmie's commitment to mouthing the lyrics of “I’ll Make A Man Out Of You.” Judges Scores: 8 – 7 – 8 – 7

Amanda Kloots & Alan – Rumba – Of course,“You’ll Be In My Heart” brought me to tears. Or was it Amanda’s son’s first Disneyland trip? Or maybe it was Alan’s Tarzan wig? Anyways, aside from missing a beat of the Mickey Dance Challenge (turning out to be very challenging!), Amanda delivered an angelic performance. Her arms were graceful and she portrayed a real connection with the material. I still feel Amanda’s history of dance could warrant more difficult material, but Alan is the expert and he’s too cute not to believe in him. Judges Scores: 8 – 8 – 8 – 8

Olivia Jade & Val – Samba – Olivia Jade didn’t come here to play, she came here to slay. Derek said it perfectly: She is fun to watch! She brought a youthful energy perfect for this Simba-Samba. Val is really pushing her each week with new and more difficult nuances and she’s meeting him every single time. After this dance, I’m fairly certain we’re seeing these two make it to the end. Judges Scores: 8 – 9 – 9 – 9

The Miz & Witney– Quick Step – The Miz as The Genie? No comment. The Miz and Witney dancing to “A Friend Like Me” … many comments! Starting with his grand Magic Lamp entrance, it’s clear The Miz wants to show off this week! The quick step was so fitting and I’m starting to see how his light WWE feet are giving him the edge on the competition. I hope The Miz continues to lean into his fun dad vibes because it’s bringing his moves to the next level. Judges Scores: 8 – 7 – 8 – 8

Kenya Moore & Brandon – Contemporary – After a week in the bottom two, the stakes are high for The Real Housewife of Motunui. Right off the bat, Kenya showed off an impressively elegant leg lift, proving she’s breaking out of her timid history on the show. Although the judges noted some missteps, Kenya remains to improve every week. While I’m not sure how far she’ll go in this competition, it was a lovely performance. Judges Scores:  7 – 7 – 8 – 7

Brian Austin Green & Sharna – Waltz – Another beautiful set arrives for only a mere moment of use, but I’m awed nonetheless! The real-life couple looked idyllic in their Snow White glam and brought the enchantment to the Enchanted Forest. One thing though: Did they even… dance? Len agreed as he commented, “Talk about ‘Someday My Prince Will Come,’ I never thought the waltz was going to come.” Sharna said she’s going to tell her real-life partner to “suck it up” and keep working hard, but this dance in particular seemed like they’re really relying on their chemistry and not so much on the movement. Sorry, Brian. You gotta step it up. Judges Scores: 6 – 6 – 7 – 6

Suni Lee & Sasha – Salsa – They got a sneak peek of Encanto and we got a Lin-Manuel number! Thank you, Disney. Once again, I had to wait too long for Suni Lee and I’m wondering who I can bring this complaint to. The energy of this number got me equally excited for Disney’s next film and Suni’s future on this show. Suni stepping up to the flavorful needs of the salsa and embracing her sillier side with her “stank face” is exactly what she needs to do to solidify her place in this competition. Judges Scores: 8 – 8 – 9 – 8

Melora Hardin & Artem – Quick Step – Playing Baloo is something Melora Hardin and I now have in common, however, I can’t say I looked like that when I did my show-stopping portrayal in the fifth grade. I’m glad Melora got to go to Disneyland this week instead of crying, but maybe a mini-vacay is exactly what she needed to bring out the best in her! (Let’s be honest, my bags are already packed for my next Disney vacation). The slapstick approach to this choreography was very clever. Bruno called this number the best quick step of the season and I must agree. Congrats to these two on the highest score of the season (so far)! Judges Scores: 9 – 9 – 9 -9

Cody Rigsby & Cheryl – Jive – They’re back in the ballroom and Cody couldn’t be any cuter with this hairdo! Moving from strong floor-ography to even stronger moon-walking, this couple is asserting their POWER(LINE). Cody’s unwavering stamina is such a strength to his ballroom game, but as Carrie Ann mentioned sometimes it makes his movement a bit choppier. Side Note: I need to take Cody’s Disney Ride ASAP. Judges Scores: 7 – 6 – 7 – 7

Iman Shumpert & Daniella – Foxtrot – Elsa is always going to bring the finale and I man is always going to bring the longest arms ever. This was a tough one for me, because personally I can’t agree with the song choice for this couple. Elsa is the star and Iman should be the star. Unless he had the blonde wig on, I’m not confident this was the number for them. That being said, I think his frame was sturdy and Len was far too tough on these two. Judges Scores: 8 – 6 – 8 – 8

At the end of the night, the judges declared Jimmie Allen and Emma as the winners of the first Mickey Dance Challenge, so they received two bonus points making them tied for fifth place. The bottom two are revealed as … nobody! With only mere seconds left to the live broadcast, Tyra revealed that all couples are moving onto tomorrow’s episode. I’m sure this is a relief to both the stars and dancers: no wasted Disney choreo! What a relief.

Well, it’s no surprise that tonight’s ode to heroes was my favorite episode yet. Luckily for us, the Mickey mirrorrball returns tomorrow night as the couples show off their bad sides and tackle Disney Villains Night. Get your cauldron ready, cause it’s about to get wicked!