In the seventh episode, titled “Born To Run,” Eli catches up with some of the greatest running backs of all time, something he could never physically do on a football field. Manning details the storied careers of some of the greats and even chats with a couple of them. The episode opens with Eli catching a ride with legendary Texas A&M running back Eric Dickerson. Eli recaps Dickerson’s career and even shows some highlights from his high school days before transitioning to the story of the “Trans A&M,” a car Dickerson received after committing to A&M that had people wondering if some rules were broken in his recruitment.

The story features a lot of recycled footage that was used in episode 4, when Eli spoke with Dickerson about recruiting. We’ve seen this kind of thing happen before, but this seemed far more excessive than past examples. Most of this segment has already been seen before.

Eli and Dickerson then get into some of the best team backfields of all time, including Dickerson and Craig James at SMU, where Dickerson eventually ended up playing after decommitting from A&M. That then leads to Dickerson breaking down one of his favorite plays, and several other highlights from his college career.

Dickerson then drives Eli to a yoga studios in Los Angeles to meet with Rickey Williams, another great college running back.in the biggest laugh of the season so far, Eli replies to Williams’ greeting of “Namaste,” with “Nnamdi Asomugha to you too,” referencing a former NFL cornerback. 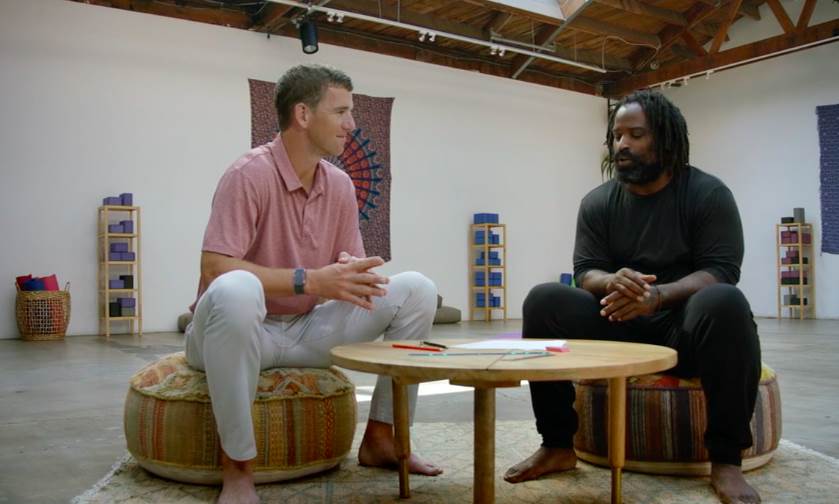 Eli then recaps Williams’ legendary playing career, starting with the recruitment process. Williams talks about choosing Texas, which then leads to a conversation about plying in the shadow of Earl Campbell. The two talk about the other legendary running back and Williams recalls getting the opportunity to meet him.

The conversation shifts to Williams being one of the rare four-year players, bypassing an opportunity to go to the NFL in order to return to the University of Texas for his senior year. They then discuss Williams being aware of all of the the all-time Texas record going into his senior year. He says he was very aware of having a chance to break the records for rushing yards, all-purpose yards and rushing touchdowns – all of which he eventually broke.

They then talk about what Williams is up to now: reading astrology charts. Williams gives Eli a reading, which gives him an opportunity to make a Game of Thrones joke. They two take their signature selfie before wrapping up their conversation.

Overall, this was another fun episode of Eli’s Places. Eli doesn’t necessarily go anywhere interesting, but Dickerson and Williams were both fascinating and entertaining guests. If not for that recycled segment, this would be one of the best episodes of the season. Also, if you’re familiar with some of Williams’ off-the-field troubles in the past, be sure to stick around for the gags during the credits.