Do you ever really leave behind who you used to be?

Author Lily Anderson invites readers to consider the answer to this question and how it applies to protagonists Jo, Autumn and Bianca in her debut young adult book, The Throwback List.

In addition to having the chance to review the book, I was delighted to ask Lily some questions of my own. Check out our chat below about books, musical theater, friendship, and the importance of looking back at who one used to be with grace. 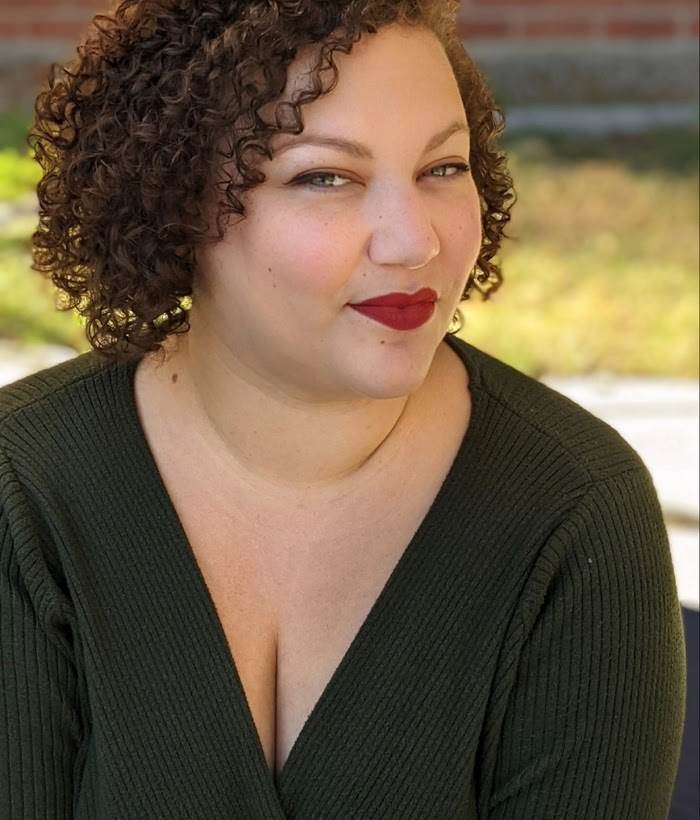 Hi Lily! Thanks for chatting with us.

Thrilled to be here, thank you!

We know you love books – you have written several novels and you were previously a school librarian. Tell us a little bit about your career to date; about books and beyond, and some of the things you have learned along the way.

Before I was a full-time author, I worked as an elementary and middle school librarian. I’d always been interested in writing books for fun—I would write books and stories just to share with my friends—but working with kids, I realized how absolutely crucial stories are to our personal development. Books are the whetstone that we grind our worldview upon. My debut novel was very much inspired by the students that I was working with at the time, who were very bright kids with what we would consider “nerdy” fandoms. Things like Star Wars, Harry Potter, Lord of the Rings, and comics were all integral to they saw the world. I wanted to reflect that back to them through another classic form: Shakespeare. So, my first book, The Only Thing Worse Than Me is You, is a retelling of Shakespeare’s Much Ado About Nothing scaffolded by geek culture. I did the same thing with Oscar Wilde’s The Importance of Being Earnest in my follow-up book, Not Now Not Ever, and my book Undead Girl Gang is about grief through the lens of horror. My new release, The Throwback List, is an adult book told through the trappings of a young adult book.

The Throwback List will be released this week. How do you feel about sending this book out into the world?

I’m very excited for The Throwback List to be out in the world! It contains a lot of firsts for me: first book about adults, first book with more than one point of view, and it’s my longest book to date.

How would you describe this story?

The Throwback List is a small-town friendship book. It’s the story of three girls—Jo, Autumn, and Bianca—who, for various reasons, all find themselves living in their hometown of Sandy Point, Oregon again almost a decade after leaving for college. Being back home makes each of the three girls reflect on who they were before they left town and who they can be now that they’re back. Jo finds a bucket list that she and Autumn wrote in high school and never completed. Jo decides to tackle the list as a project for her social media, and Autumn and Bianca become part of the hijinks.

Tell us a little bit about how you ended up working with Disney on this project and what the brainstorming process for The Throwback List looked like. Where did the idea for this story come from?

A few years ago, Disney approached me with the idea of writing a bucket list book for what would go on to become Hyperion Avenue, the new adult wing of Disney-Hyperion’s publishing imprint. I’ve always been really interested in the idea of going home again, probably because my childhood home sold the month after I left for college, so I’ve never really had anywhere to go back to. I also really wanted to look at how people go about making friends as adults. In YA—and in real life as a teenager—most friendships come out of going to high school together. It’s much harder after you leave school to create new friendships. 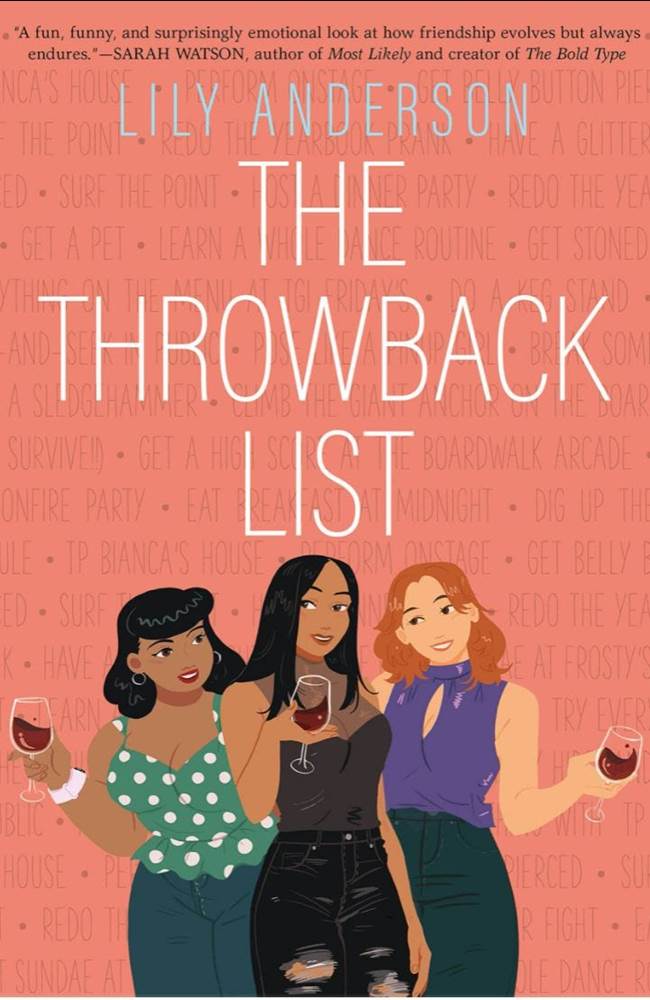 What do you think are the key thematic takeaways, or what themes resonate most with you, from The Throwback List and why?

My favorite takeaway from The Throwback List is right on the cover: do you ever really leave behind who you used to be? At the beginning of the book, Jo is back in her parents’ house for the first time in years and finds an old diary that contains the titular Throwback List. Reading over the things that her seventeen-year-old-self thought were cool and important at twenty-six makes her realize that her teenaged self would think she’d grown up to be boring. She—along with Bianca and Autumn—spend the book wrestling with the idea of who they thought they were going to be when they grew up versus who they actually are.

Were your protagonists – Jo, Autumn and Bianca – inspired by certain people in particular or did you draw from numerous people or other inspiration in creating each of these characters?

I mean, as a writer, all of my characters are me. Sure, there are other influences in people I’ve known or read about, but really these three girls are very much reflections of myself. Jo is my questions about where I fit in the world as a mixed race woman. Bianca is my overachiever self who is never satisfied. Autumn is my inner theater kid who never made it to Broadway.

Who is your favorite character in this story and why?

I love all of my characters, obviously, but I really enjoyed writing about Autumn. She’s a high school drama teacher who moved back home after failing to become a famous actor in Los Angeles. Theater was such a huge part of my life from the first grade and through to my early twenties. My first two books were based on plays, but never really touched on actual theater people. It was a blast to be able to make references to musicals and quote Shakespeare with impunity when I was working on an Autumn chapter. That said, I did give her different favorite musicals than me to help her become her own character. She’s more of a spectacle musical person and I’m more of a Sondheim person.

What relationships were important for you to explore in this story and why?

The book really hinges on the friendships of the three main characters. More than anything, this is a friendship book very much in line with the Sex and the City idea that you’re best friends are your soulmates. Jo and Autumn were best friends in high school, but lost touch. Autumn and Bianca became friends in college, but got much closer once they both moved back to Sandy Point. Jo and Bianca are really just getting to know each other for the first time. As adults who have lived in the world and been hurt before and even hurt each other before, each girl has to learn how to trust the other two and how to come together as a group of friends.

Without giving too much away, what is your favorite scene or chapter in The Throwback List and why?

My favorite scene comes around the middle of the book. In order to check off a bunch of Throwback List items at once, the three girls decide to have a sleepover. Having done a few girls’ trip vacations myself as an adult, I wanted to capture the blurry line between drinking wine in an Airbnb and being ten-year-old girls talking in sleeping bags with the lights out. It was so much fun to write. I definitely had to edit it down because it ended up being like twenty pages of just pure silliness.

How did your process for writing this book differ, if at all, from previous books and projects you have undertaken?

Every book, for me, gets written totally different. Some books I write early in the morning. Some books I can only write out of the house at a coffee shop or the library. This was the first book that I wrote without a day job, so I wrote it almost exclusively on my couch during working hours. I also rewrote it more times than any other book. I completely scrapped the first draft and started over to make it really sing. It was hard work, but I really ended up loving the final product.

You note in your bio that you have strong opinions on musical theater. Will you share some of those with us and make some recommendations about shows you think are a must-see?

Wow, thank you this is truly the best question! My favorite musical of all-time is Into The Woods. I saw it for the first time on PBS when I was three and it basically wrote the software that became my brain. I have two musical theater tattoos, both are song lyrics. The first is “make a joyful noise, my soul,” which is from Bat Boy the musical, which is a very dark comedy that never made it to Broadway (a crime) and the other is “why we tell the story,” which is from the finale of Once On This Island. Both perfect shows from top to bottom. Bat Boy’s Laurence O’Keefe also wrote Legally Blonde and Heathers—Heathers is an absolutely brutal, incredible piece of art. Other must sees are Sunday in the Park With George, The Drowsy Chaperone, The Wiz, and A Year With Frog And Toad.

What is next for Lily Anderson?

My next book is out exactly six months after The Throwback List! April 5, 2022 my next young adult novel, Scout’s Honor, will be out. It’s about a scouting organization called the Ladybird Scouts which operate as a front that teaches young girls how to hunt monsters. It’s Buffy the Vampire Slayer meets Stranger Things meets Troop Beverly Hills!

What do you ultimately hope readers get out of The Throwback List?

I hope that adults reading The Throwback List  learn to look back at who they used to be with grace. The kid you were would be amazed at things you take for granted, from the relationship you have with your parents to the smartphone in your pocket. I hope that teenagers reading The Throwback List realize that they don’t have to have everything figured out now or when they’re in their 20s, and that someday high school doesn’t have to be the best, most important time of your life. Someday, you’ll look back with nostalgia and laugh at what you thought you knew.

The Throwback List was released on October 5 and is now available.