Hello and welcome to Laughing Place’s regular recap of the science-fiction/drama series Y: The Last Man. The eighth installment of the show, entitled “Ready. Aim. Fire.,” was released today via FX on Hulu. 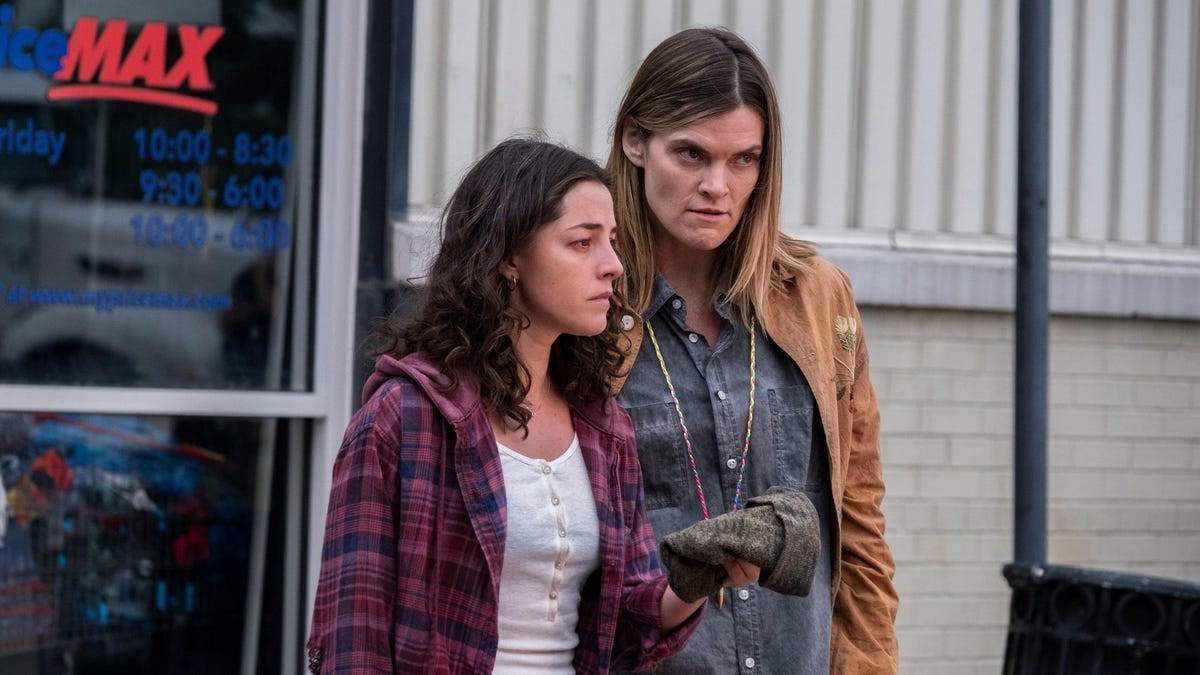 “Ready. Aim. Fire.” begins with Roxanne trying to persuade a woman named Kate to return with her to the PriceMAX. Kate makes a break for it and Roxanne shoots her in the back, but is angry with herself for doing it. “What is wrong with you!?!” she yells and runs back to the store. After the opening credits, we see Hero and other women from the PriceMAX doing target practice on mannequins as Roxanne guides them. Roxanne is impressed with Hero’s skills, and gives a speech about how women’s bodies belong to them, and not to men. “We’re stronger than they told us we were.” Sam watches from the sidelines, and Hero tries to convince him to join in on the practice. Roxanne asks Sam what he did before the cataclysm. “I worked in theater.” Roxanne bullies Sam into taking the gun. Inside the store, Nora watches her daughter play, and a woman asks her, “Where will you go?”

Nora is surprised by this question, and demands that Roxanne tell her why they’re being kicked out. “It’s not personal. You’re not our people.” “We’ll die out there,” replies Nora. “Give yourself some credit. You made it this far,” says Roxanne. In a flashback, Roxanne breaks into the women’s shelter claiming to be police and brings the women residing there back to the PriceMAX. We see how she convinces these women to join her convent. “If your house was safe before, it’s not safe now. You’re all welcome here.” Back in the present, Roxanne leads another group discussion about the evils of men. Sam murmurs a snide comment to Hero and Roxanne gets upset, asking Hero to tell the group about her father. She doesn’t have anything bad to say about him, so Roxanne moves on to her brother. “He was the only person in my family that even remotely understood me.” 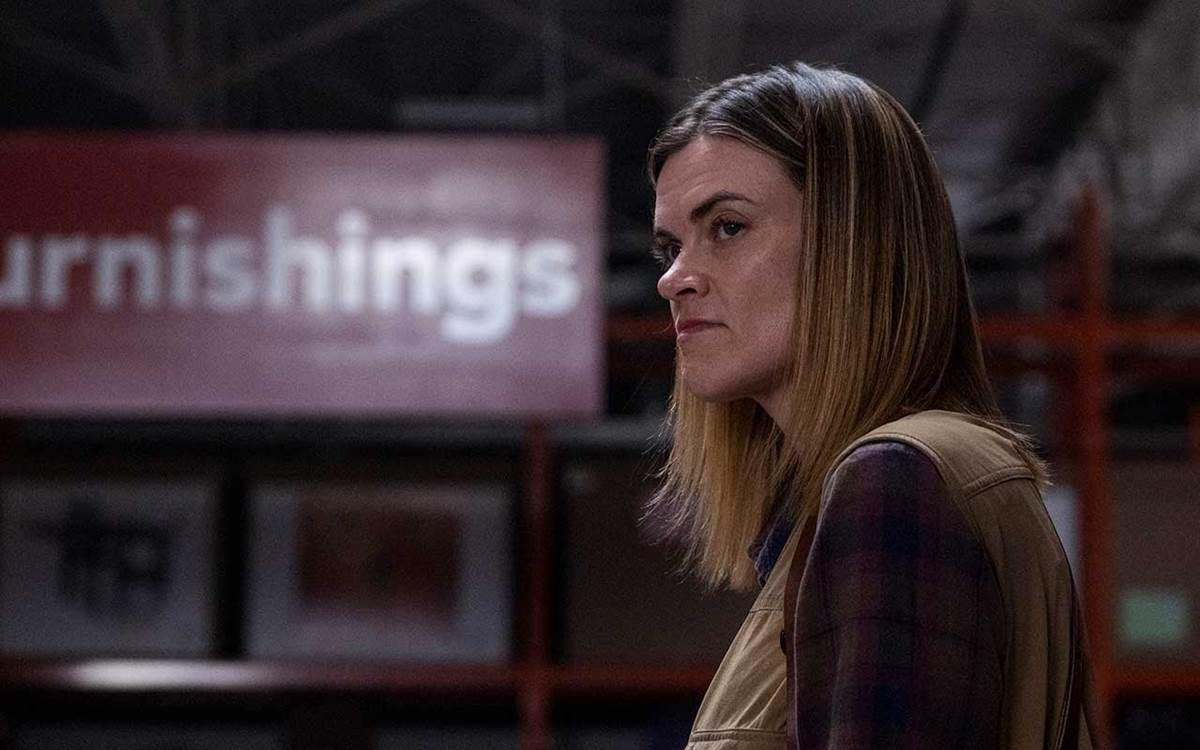 “I wonder, what did he say about you when you weren’t in the room?” asks Roxanne, prodding Hero to say something negative about Yorick. Later, Nora talks to Sam about leaving together. “I know you don’t like it here either,” Nora says. “Did I give you the impression that we’re friends? I just don’t trust you,” replies Sam. Nora says sooner or later the food will run out at the PriceMAX, but Sam just goes back into the store to talk with Hero. He proposes that they find their own house to live in, calling Roxanne’s group a cult. “They keep talking about how terrible men are.” Hero tells Sam to make the most of it there and get together with Kelsey. They argue and don’t see eye-to-eye, but Roxanne interrupts and Hero apologizes, but Sam is still angry. At night, Sam gets out of his bunk and prepares to leave the PriceMAX, but Roxanne stops him. “You better get going. She’ll be awake soon,” she says, and Sam departs.

In another flashback to earlier in the timeline, Roxanne gathers a bunch of corpses in a pile and tries to set them on fire. She finds an abandoned police car with a corpse inside it and also discovers the women’s shelter by following a horse. In the present, Roxanne approaches Hero after she discovers that Sam has left. “He doesn’t deserve you,” Roxanne says. She tells Hero about her husband Eddie who left her. “Men aren’t good at staying,” she says. She walks Hero outside to a bonfire that she calls a “Better Off Without Them Party.” Roxanne tells Hero to throw Sam’s blanket in the fire, and the women have a big celebration into the night. Nora watches from a distance and tells her daughter Mackenzie that she’s thinking about leaving. Mackenzie refuses to go and Nora yells at her, then feels guilty about it. After everyone has fallen asleep, she watches Roxanne warily.

Nora takes the lighter fluid from the bonfire and pours out a trail leading to the inside of the PriceMAX, then kicks an ember to start the flames moving. Panic ensues as the building is engulfed in flames, and everyone evacuates. A third flashback shows Roxanne pushing the police car into a lake and crafting her plan to infiltrate the women’s shelter. She readies the PriceMAX for habitation and forms a big circle of tractor trailers around the perimeter. She lays on the ground outside the home and fires three shots into the sky, then crawls toward the house. In the present, we see Sam opening the door to an elementary school. He plays the piano in the music room, stumbling upon a woman who calls herself Principal Blackwell. “One day the children will be back,” she says. She asks Sam to stay for a while and tells him to continue playing the piano.

At the PriceMAX, everyone is infighting about whose fault the fire was, and Nora approaches Hero, telling her a story about how she and her mother never got along. “I know your mom a little bit. I know how tough she can be. But whatever happened, she forgives you.” Hero says she’s not going to the Pentagon, so Nora sneaks off to get a hidden backpack by the lake, where a giant bird floating on a piece of the submerged police car spooks her. She finds the rest of the car and discovers an identification card inside. In another flashback, we see Roxanne first finding the PriceMAX and starting to clear out the mess, when another woman enters carrying a handgun. That woman is chased by a third woman with a shotgun, and these two kill each other. Roxanne takes the handgun and kills a fourth woman who enters the store, and a fifth.

In the present, Roxanne sifts through the wreckage of the ruined PriceMAX, and Nora enters to talk with her. “I used to work in politics. You have a communications problem.” She starts breaking down the problems with the commune and tells Roxanne, “Your instincts are strong, but you’re not as good a liar as you think you are. You killed those people, didn’t you?” Nora says to keep her people, she needs more than “men suck.” Nora makes a list of demands if Roxanne doesn’t tell the group the truth about who she is. Then we get another, even earlier flashback to Roxanne working at the PriceMAX and filing a complaint against her sexist coworker. “He’s just a kid. Cut him some slack,” her manager tells her. He accuses her of stealing a DVD box set of Law & Order, and puts her on notice. In the present, Kelsey reads Hero’s palm, and tells her she’ll “serve others for the good of mankind.” “That doesn’t sound like me,” Hero replies.

Roxanne gathers the group around and gives them another speech about how she had a bout of cancer before the cataclysm. Then she talks about the Amazons, and how they would cut off one of their breasts so their arrows would shoot straighter. “This is an opportunity to take what we deserve. We are warrior women. This is our world now!” Watching from the side, Nora puts the PriceMAX name tag with the name “Roxanne” back in her jacket pocket.