In the eighth episode, titled “Hidden History,” Eli travels the country to learn about the football history of historically black colleges and universities. To do so, he speaks with some of the greatest players of all time, including the legendary Jerry Rice. The episode opens with Eli chatting with Rice, who is almost unanimously believed to be the greatest wide receiver in NFL history. Rice talks about some of the difference between playing at an HBCU and one of the big schools, mentioning that he had to clean his own uniform after the game.

They then take a look at the unique offense run by Mississippi Valley State while Rice was there. Rice talks about “The Satellite Express” and how they were always looking to put 100 points on the board. He asl mentions his go to route was a simple go route and that he would look to get close enough to the defensive back to hear his heartbeat before making his break. They then take a break from the football talk as Rice shows off some of his experience with horses. Eli even saddles up on a donkey for a quick ride.

Manning then flies from San Francisco to Nashville to meet with former Dallas Cowboys defensive lineman Ed “Too Tall” Jones. Before starting their conversation, Eli gives some history on HBCU alums. He explains that there are currently 34 HBCU alums in the pro football hall of fame.

Jones was the first pick in the 1974 NFL draft but Eli really wanted to ask him about the outfit he wore after getting drafted. That sparks a conversation about some other memorable (for the wrong reasons) outfits worn by players during the NFL draft. 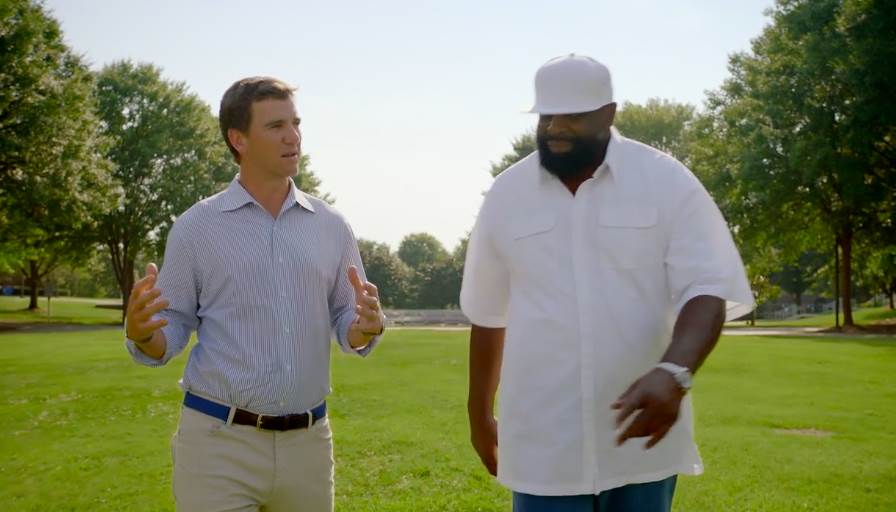 They then talk about how Jones attended Tennessee State University on a basketball scholarship and had never played football before getting to the school. That leads to a conversation about Jones’ signature batted pass, something he became known for, being that he has a massive wingspan that wouldn’t allow opposing quarterbacks to throw over or around him.

Eli then meets with Eddie George, former Tennessee Titans running back and current Tennessee State coach. The two discuss the history of great coaches at HBCUs. George walks Eli through what some of those coaches and their players had to deal with, including taping players up, groundskeeping duties and even making sandwiches for the team.

George, who is also accomplished Shakespearian actor, explains that legendary coach Jake Gaither uses to use an onion to make himself cry for his pregame speeches. The episode comes to a close with George trying out the trick and delivering memorable speeches from some of the most beloved football movies.

Every once in a while, these shows will reach a crossroads where sports history meets real world history and it’s always great to see. Hearing about these HBCUs from players and coaches who have had that experience is fascinating. Eli, of course, also manages to make the episode very entertaining as well.