Halloween is around the corner, and what better way to prep for the night of spookiness than to watch a good old fashioned alien invasion thriller. The Puppet Masters is based on the novel by acclaimed author Robert A. Heinlein, but will the film offer a fright for movie goers? 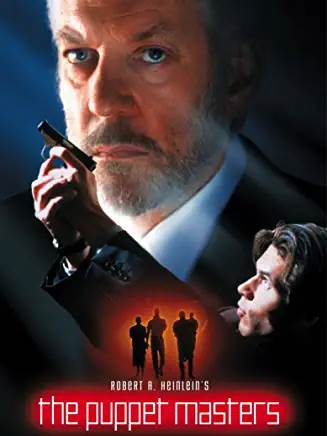 Andrew Nivens is the head of a shadowy science related government agency who is alarmed by a possible UFO sighting. The UFO ship reportedly crashed outside of a small Iowa town and the director with his son Sam, and Mary Sefton (on loan from NASA) have arrived in town to investigate the incident. What they find is troubling. It appears that aliens have invaded. Acting as a parasite using human hosts' bodies, they are replicating every hour, and spreading throughout the country.

Back in Washington, Director Nivens and his team are tasked with saving the country from this hidden menace before it’s too late. With exponential growth, the alien life could overtake the USA in a matter of days. Hard choices need to be made, and with Nivens’ holding great influence over the President of the United States, he will stop at nothing to eliminate the alien threat.

Donald Sutherland plays the role of Andrew Nivens perfectly. He is part ruthless government official who will stop at nothing to achieve success, and part loving father. Throughout the film, Sutherland is a constant presence that lends credibility and stature to the story. Without Donald Sutherland, the film would fall apart.

The story starts off strong and then falls apart mid-way through the movie. What looks like a compelling and chilling tale of an alien invasion becomes a campy silly movie with knockoff aliens from other more popular film sagas.

Yaphet Kotto and Keith David do not get enough screen time in the movie. There is one scene where an entire army unit is overtaken by the aliens. It would have been better to have Yaphet Kotto placed in the role of that general who is compromised which would have allowed such a talented actor more screen time.

Keith David is a perfect buddy to Eric Thal’s Sam, but Keith David’s character was turned into the stereotypical sidekick that doesn’t make it home alive.

Will Patton plays a scientist. Will Patton would have made a better soldier and is greatly underused in this film. I would have loved to see Will Patton’s character, Sam, and Keith David’s character storm the alien hive at the end of the movie.

The Puppet Masters starts off strong but can’t seem to stick the landing as the film transitions into the third act. I really enjoyed Donald Sutherland and thought he was perfect for the role of Andrew Nivens. Mr. Sutherland’s gravitas keeps the film moving when the script hits stumbling blocks.

The Puppet Masters gets a level 2 “Streamy Award”. If you are looking for a film to play in the background while you are doing other tasks, then logon to Disney+ on your tablet and start streaming. You will no doubt enjoy what you see, but it’s not a movie that requires your full attention.

Next week we finish off the Halloween season with another fright fest from Hollywood Pictures. Primeval is the story of a maneating 25-foot crocodile of the African jungle. Preying on the locals, the story has attracted the attention of an American news crew. While they pursue this monster, little does the news crew know, that the monster is hunting them.