Are you looking for a horror movie that stars a gargantuan monster lurking in the water waiting to strike at unsuspecting victims? Then look no further. 2007’s R rated Hollywood Pictures release, Primeval is going to be a killer time. With a gigantic crocodile terrorizing the river communities of Burundi, an intrepid team of journalists and big game hunters set out to end the reign of terror that the animal has unleashed. 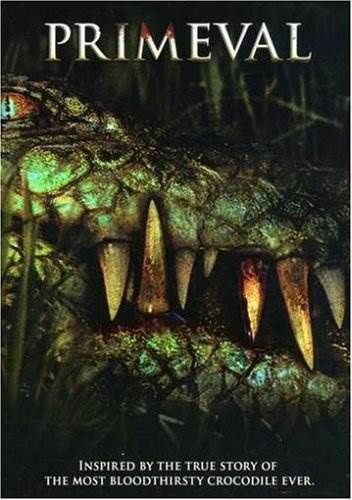 A fiendish crocodile is terrorizing villages throughout Burundi. Journalists Tim Manfrey and Steven Johnson join Aviva Masters on a quest to capture the rogue animal and stop the slaughter of the locals. Once they land in Africa, well laid plans fall to pieces in the bush.

Partnered with wildlife expert Matt Collins and local hunter Jacob Krieg, the group sets out to capture the crocodile which locals have named Gustave, only to see their mission fall apart due to the power of the beast and the turbulent political situation in the country.

Burundi is a dangerous place where civil war has plagued the land, and between the danger of Gustave, the group must also fear the warlord Little Gustave. Despite having a massive cage to capture the croc in, the mission fails, and Tim and Aviva barely escape with their lives.

So much blood is shed on this doomed mission, but the true fear and danger doesn’t just come from an oversized crocodile. We learn that the true terror comes from the extremists who prey on the innocent, and western ignorance to the depravity of civil war in Africa.

Orlando Jones makes every scene he’s in watchable and fun. I personally think he should have been the lead. His character Steven is far more relatable than anyone else, and it’s easy to connect with Steven thanks to Jones’ incredible talent at making dialogue that has been said so many times on screen, seem fresh.

If you are going to have a movie about a killer animal and it’s set in Africa than your film must have a stereotypical big game hunter, and thankfully we see Jurgen Prochnow fill that role. Prochnow is another example of a talented actor who makes the most of what he is given but doesn’t get the screen time he deserves.

The lead characters of Tim and Aviva are very thin and show little depth throughout the film. The movie spends a lot of time having our main characters running from one disaster to another and we as an audience gain nothing from them. Tim and Aviva are the least interesting characters, but they get the most screen time in the film.

Primeval suffers from being a copycat film of some legendary movies that preceded it. Being based on true events has done little to add authenticity to the story and makes me what to seek out the PBS documentary that inspired this movie because I’m more interested in the true story and less about the terror of Gustave in this film.

The biggest problem that Primeval suffers from is that it doesn’t know what kind of film it wants to be. Is this a horror film? A political movie about the state of Africa? When your movie is trying to be part Blood Diamond mixed in with elements of The Ghost and the Darkness and Jaws it’s hard to care about how the film ends.

Primeval desperately wants to be the Jaws of the jungle but it falls short of the masterpiece of terror from Steven Spielberg. There are some good moments in the film, and Orlando Jones alone makes much of the story entertaining, but Primeval is a long way from being a horror masterpiece.

I give Primeval a Level 1 Streamy Award. If you are out and about on public transit and you are looking for something new, then check this film out, otherwise don’t bother.

With the World Series being played out between Atlanta and Houston, we look back at a comedy that has baseball at its core, Mr. Destiny.