50 years ago, George Lucas began his feature filmmaking career with the release of THX 1138, and the storytelling legacy he subsequently built with his own two Star Wars movie trilogies continued under Lucasfilm’s new owner Disney beginning in 2012.

This week saw the release of Star Wars Year By Year: A Visual History – New Edition, a thoroughly updated and expanded version of the fascinating hardcover coffee-table book first released in 2010 (with other editions having been published in 2012 and 2016, to mark other unique occasions in Lucasfilm history such as the Disney acquisition and the launch of the sequel trilogy). Adding to previous chapters written by Ryder Windham (Star Wars: The Rise and Fall of Darth Vader), Daniel Wallace (The Art of Star Wars Rebels), and Pablo Hidalgo (The Star Wars Book), new contributor Kristin Baver (Skywalker: A Family at War) has partnered with Hidalgo to chronicle the plentiful real-world, behind-the-scenes, and public events surrounding the Star Wars franchise between the years of 2013 and 2021. But as someone who didn’t own any of the previous editions of this book before receiving Star Wars Year By Year: A Visual History – New Edition, I found myself engrossed in the nearly 400-page hardcover volume from the very beginning. From the top, Windham dives into 20th Century events that predate development of Star Wars, exploring the evolution of the film industry and historical happenings that helped provide a foundation for George Lucas’s rise to prominence as a filmmaker in the 1970s– and a narrative and cultural groundwork for A Galaxy Far, Far Away. 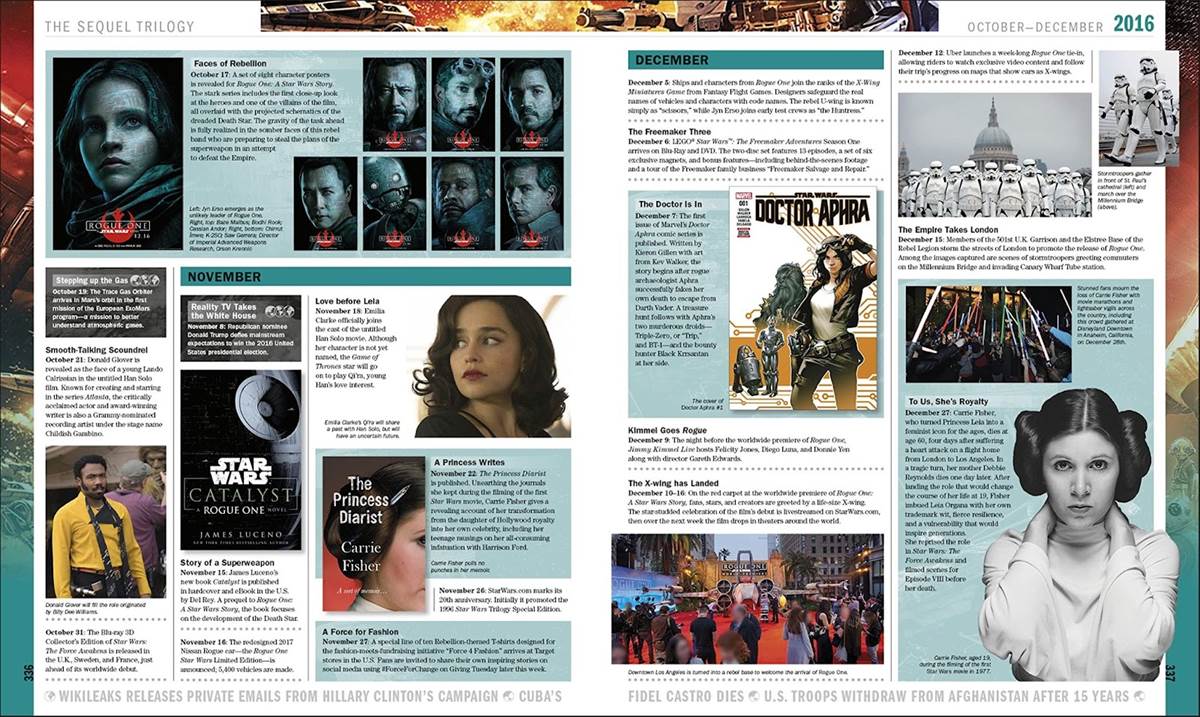 Then Wallace tackles the “Dark Times,” the period from the mid-80s through the early 90s during which there wasn’t a tremendous amount of Star Wars content being produced, though he does manage to find plenty to talk about anyway, and fortunately this era ends with the then-flourishing Expanded Universe of novels and comic books, plus the relaunch of Hasbro’s popular Star Wars action figure line. And after Hidalgo tackles the prequel trilogy and The Clone Wars animated series, he and Baver take on the new stuff: basically everything that has happened since Disney bought Lucasfilm. It’s particularly interesting how all of these authors place milestones in the Star Wars timeline within the context of real-world current events such as numerous NASA space launches all the way up through the January 6 insurrection at the U.S. Capitol building this year. The vast majority of entries are accompanied by illustrations, set photography, and/or poster art promoting the various releases documented within, and it was great to be reminded of events I had forgotten about– not to mention more than a few I had the wonderful opportunity of attending myself, such as Star Wars Celebrations and movie premieres. I think for Star Wars fans who grew up on the franchise, this New Edition of Star Wars Year By Year is going to be an essential keepsake for their collection, and a fairly exhaustive reminder of the almost-daunting amount of material that has been released from this beloved fictional universe, plus the impact that it has had on (and had from) human society as a whole. And for fans who have more recently been introduced to the George Lucas-created saga, this will be an essential guide to things they may have missed. What better way to catch up on five decades’ worth of Star Wars history than with this chronicling penned by some of the world’s foremost experts on the subject? Whether you’re a lifelong Star Wars devotee searching for another hit of nostalgia or a casual enthusiast looking to brush up your knowledge of Lucasfilm’s past and present, I can’t think of a better researched, more comprehensive, or more visually appealing source than this book.