Touchstone and Beyond: A History of Disney’s “One Good Cop”

Michael Keaton is currently headlining the gripping drama series Dopesick on Hulu and Disney+, but have you seen him in One Good Cop? This 90’s gem from Disney’s vault is our film for the week. 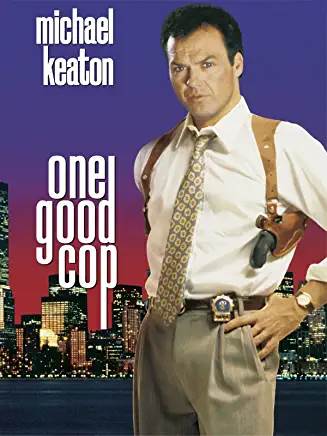 Det. Artie Lewis and his partner Stevie lead a high-profile arrest which gets Stevie killed and leaves his three children orphaned. Artie and his wife Rita are left caring for the kids.

The problem for Artie is that he and Rita never planned to have kids, and with Stevie’s three girls, they must make some changes in order to maintain their guardianship of the children. Artie has little money saved, and he is forced to take desperate measures.

Knowing that local drug dealer Benjamino has excess cash, Artie decides to rob from the rich criminal to help make his family dream come true. But Artie isn’t interested in the money, so after the robbery, he takes only what he needs and then gives the rest to a local church.

Problems arise when Artie’s informant gives him up to Benjamino, and the one good cop is taken hostage. About to be killed, Artie finds some help from an undercover agent and survives. Help from his colleagues spares Artie an investigation and any consequences for his actions.

Michael Keaton is great as Artie Lewis. He walks a fine line of being a decent human being, good friend, and righteous cop, who is out of options. The premise of the film is that Artie is a good guy and when faced with desperate measures, even the good can do wrong. What Lewis does is wrong, there is no doubt about it, but Keaton’s performance makes the wrong okay, and absolves the character of his sin. Only Michael Keaton could walk that fine of a path on such a narrow tightrope.

Rene Russo is wonderful as Rita. Her character is tough, loving to her husband, and shows many of the same characteristics that Keaton upholds on the screen. They are a perfect match.

Tony Plana is wonderfully evil as Benjamino. He plays the drug dealer with joy, while also showing what a ruthless monster the character can be. His character is stereotypical with standard villain tropes, but Plana alleviates those problems with the joy of his presence and the inherent villainy of Benjamino.

Artie Lewis commits multiple crimes so he can pay for the house for his family and receives no punishment for his transgressions. While the film is meant to end happily, the fact that Artie gets away with his crimes because he takes out some drug dealers, seems to contradict the title of the film. Artie faces no repercussions. He lives happily ever after despite the fact that he is a criminal now.

One Good Cop takes a standard premise, rob from the rich and give to the poor, and places it in a unique format. While Roger Ebert makes many valid points in his criticisms about the coverup and the ending of the film, as a filmgoer I’m going to let those pass because of terrific performances by Michael Keaton, Rene Russo, and Tony Plana.

One Good Cop gets a level 3 ‘Streamy Award’. If you are setting off on a trip and need an entertaining action-packed movie, then One Good Cop is the perfect choice.

In celebration of the recent Tom Hanks film Finch, we look back at his 2004 Coen Brothers collaboration, The Ladykillers.