Touchstone and Beyond: A History of Disney’s “Seabiscuit”

Touchstone Pictures released hundreds of films in its time. Many are classics and some are best forgotten. But did you know that Touchstone Pictures had a hand in producing some blockbuster films that the average film goer would never associate with the Disney label

This week begins a look at films from other studios that Touchstone Pictures helped along into production. For this week, it’s time to mount our horse and race with Seabiscuit. 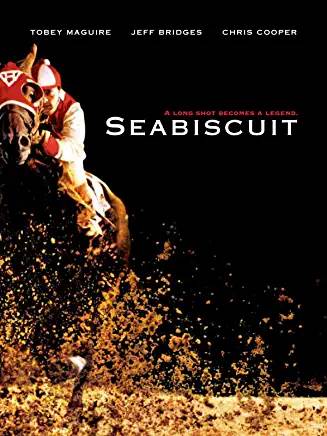 The story of Seabiscuit, the champion racehorse is recounted as it intersects with jockey Red Pollard, trainer Tom Smith, and owner Charles Howard. The three of them come together and through their commitment to Seabiscuit they rebuild their lives.

With a backdrop of the Great Depression, Pollard, Smith, and Howard must find common ground to help Seabiscuit succeed. For if the horse is a winner, then the humans will be winners too.

Seabiscuit is the type of film that once you start watching, it is impossible to stop. The story of the little horse that could is compelling, and the characters who are connected to Seabiscuit are likeable. The fact that it’s a true story only makes the movie more interesting.

Tobey Maguire is at his best as Red Pollard. Coming off the success of Spider-Man, Maguire could have done anything, and by choosing to play Pollard, he was pushing himself for a challenge. The fact that Maguire had to drop the muscle he had from Spider-Man to play the scrawny Pollard and make it believable is astounding.

Jeff Bridges is brilliant as Charles Howard. This is one of those performances that Bridges can be a human who has experienced so much heartbreak, but also maintains a lot of hope. Charles Howard is a multi-layered performance that gives Bridges the room to build a likeable character that plays the rich benefactor well.

The dynamic of Bridges and Elizabeth Banks couldn’t be any better. The age gap disappears and their chemistry on screen radiates when they are together.

Being adapted from a non-fiction book there is bound to be some truth erased in the screenplay. The marriage between Marcela and Charles Howard is not because of some random chance as portrayed in the film. Apparently, Marcela in real life was the older sister of the wife of Charles Howard’s oldest son. Neither of those characters are mentioned in the film.

Despite some omissions of history, Seabiscuit is the type of film that would inspire viewers to read the book and learn more about the story they are seeing.

Seabiscuit is a brilliant epic that will hook viewers from the start to the finish. It gets the distinctive honor of a Level 4 ‘Streamy Award’. Find the biggest screen possible to watch this horse racing drama.

From horse track with Universal Pictures, we journey to the action-packed world where a cop and crook exchange faces, in the Paramount Pictures film, Face/Off.