This week a look back at another film that Touchstone Pictures helped to produce that doesn’t have the official Disney label. Paramount Pictures may have their name on the blockbuster Face/Off, but Touchstone Pictures was a co producer on the John Travolta/Nicolas Cage action spectacle. 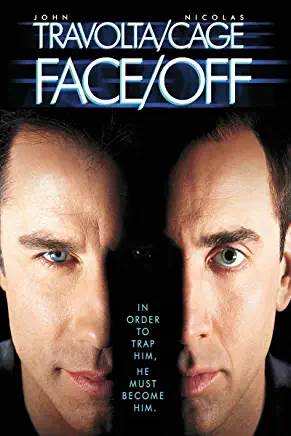 Sean Archer is the best of the best at the FBI. His dogged pursuit of master criminal Castor Troy nearly kills him and takes the life of his young son. With vengeance on his mind, Archer apprehends Troy thinking that he died. The long nightmare for the Archer family is over.

Until Sean learns that Castor Troy didn’t die but is in a coma. With the threat of planned bombing by Troy that could kills thousands, Archer agrees to undergo an experimental surgery where he will have his face switched with Troy, so that Archer can gain important information from Pollux Troy, Castor’s brother, who is currently in prison.

All seems to be going well, until Castor Troy, shows up at the prison wearing Sean Archer’s face. Troy has now assumed Archer’s life, and no one knows except the real Sean Archer. Faced with no other solutions, the real Sean Archer must escape from prison, use Troy’s accomplices to his advantage, save his family, and try to regain his face and freedom.

John Woo knows how to make a great action film, and Face/Off is incredible. The story is fast past, with multiple explosions, and physicality that is rarely seen so consistently in the movies. Woo can ratchet up the tension of a fierce gun battle based on his filming style, and the frenetic energy that he is able to extract from his actors makes the movie unique amongst its contemporaries.

John Travolta and Nicolas Cage could not be better matched in their roles. Not only do they get to play the hero, but they get to be the villain while pretending to be each other. Cage is an excellent start as Castor Troy, but there is something wonderful about how Travolta reintroduces the audience to Castor wearing Sean Archer’s face. Travolta has a hint of manic glee that continues throughout the film while being the wolf in sheep’s clothing.

I genuinely dislike the scenes where Sean Archer swipes his hand down the face of his wife and daughter. Sure, it’s a sign of affection and love, but it was weird when I watched the movie in 1997 and continues to be off putting. Perhaps if it was only used once or twice it would be fine, but for my enjoyment it just seems strange.

Seeing John Travolta’s Castor Troy leering at his onscreen daughter played by Dominque Swain was within character for Castor Troy but could be cut out. It’s just creepy to watch.

If you can’t suspend your disbelief then you will want to avoid Face/Off. The action sequences push well beyond the boundaries of reality, and there is no way any of the characters would be able to walk away from the hard bought battles that they participate in.

Face/Off is excellent. Few films capture the explosive action of the late 1990’s like this film. Not only is the story compelling, but the lead actors are at the top of their game. You want to root for Sean Archer, but it’s so hard not to cheer on John Travolta when he has assumed the role of Castor Troy, wearing Archer’s face.

Travolta looks so happy and gleeful in the destruction that he brings to the screen. Is it over the top? You bet it is, but that’s what makes this film endure, and so enjoyable.

Face/Off gets a Level 4 Streamy Award. Watch this film on the biggest screen possible and turn the sound up. You will not be disappointed.

Next week a revisit of the Bette Midler and James Caan’s war drama, For The Boys.